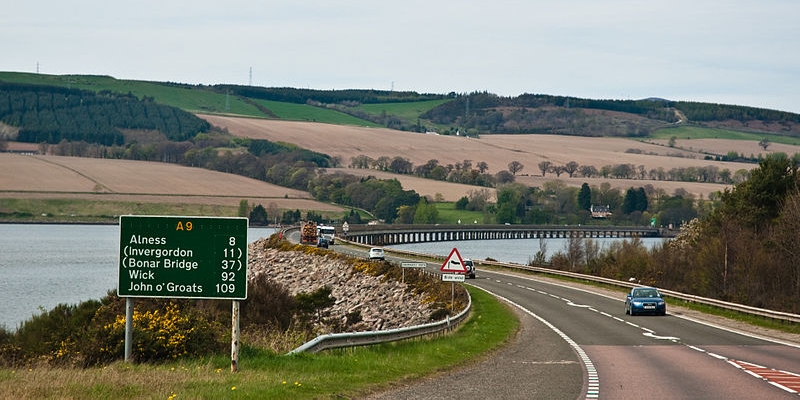 Work begins on £3bn A9 dualling programme in Scotland

Representing the Scottish Government flagship infrastructure investment project, the programme will see around 80 miles of upgraded road being delivered between Perth and Inverness by 2025.

As part of a £35m contract awarded in June, the Wills Bros/John Paul JV began working on the five-mile long section between Kincraig and Dalraddy in the Highlands.

The European Commission proposed to formulate new rules for traffic fines, under which UK motorists will be penalised if caught speeding abroad.

Electric highway trials to begin this year in UK

Highways England in the UK announced plans to start off-road trials of the new technology needed to power electric and hybrid vehicles on the country’s major roads.

The new technology will allow electric and hybrid vehicles to automatically recharge as they drive along major roads and motorways.

Samsung introduced its Safety Truck, which allows the driver following the truck to clearly ‘see-through’ the vehicle for any oncoming traffic, as part of efforts to make highways safer.

The trucks are equipped with cameras in the front side and four screens at the rear to help drivers gauge when it is safe to overtake.

The company is currently seeking regulatory approval for the safety trucks, which could save lives and limit accidents caused by overtaking and sudden braking.

Google held talks with various automakers in a bid to speed up its plans to bring self-driving cars to market by 2020.

Google self-driving car project director Chris Urmson told Reuters: "We’d be remiss not to talk to the biggest auto manufacturers. They’ve got a lot to offer."

General Motors, Ford Motor, Toyota Motor, Daimler and Volkswagen are the automakers with which the company is in discussions.

The new split-view camera displays a 180° view of the area in front of or behind a vehicle helping drivers see traffic and obstacles that enter the vehicle’s path from the side.

Australia’s IFM Investors completed the acquisition of ITR Concession Company (ITRCC), which operates the Indiana Toll Road in the US, for A$5.7bn ($4.3bn).

As part of the concession and lease agreement signed in 2006 between ITRCC and the Indiana Finance Authority (IFA), ITRCC will operate and maintain the 157-mile, limited-access, divided highway Indiana Toll Road.

Spanning northern Indiana from its border with Ohio to the Illinois state line near Chicago, the Indiana Toll Road feeds directly into two toll roads at the state lines including the Chicago Skyway and the Ohio Turnpike.

China to unveil plans for $46bn corridor link in Pakistan

China announced plans to unveil a $46bn investment plan called the China-Pakistan Economic Corridor (CPEC) in Pakistan, which is expected to include a network of roads, railway and pipelines between the two countries.

The new corridor, which will be established between the southern Gwadar port of Pakistan on the Arabian Sea and the western Xinjiang region in China, is set to run through Pakistan’s poor Baluchistan province.

The Guardian reported that the latest development is part of Beijing’s efforts to boost investments in Pakistan in line with its expansion plans across the Central and South Asian regions.

India’s Union Minister for Road Transport, Highways and Shipping Transport Minister discussed with Sri Lankan Prime Minister Ranil Wickremesinghe on an $5.19bn road project that would link India and the island nation with a seabridge and an underwater tunnel.

The two countries discussed plans to construct a sea bridge and a tunnel that would connect the 22km stretch between Talaimannar of Sri Lanka and and Dhanushkodi of India, PTI reported, citing official sources.

India has already inked motor vehicle agreements with Bangladesh, Bhutan and Nepal, in order to boost connectivity with neighbouring countries and is now also planning to improve connectivity with the island nation.

The UAE Government revealed plans to install smart gates on the main roads linking the capital city of Abu Dhabi to other parts of the country.