ContinueLearn More X
X
Advertise with us
admin 4 May 2014

Concessions and construction firm Vinci secured an €850m contract for the second phase of the New Orbital Highway in Doha, Qatar.

The project will be carried out by the joint venture led by QDVC, with 51% held by Qatari Diaris, and 49% by VINCI Construction Grands Projets subsidiary, and Qatari Bin Omran Trading & Contracting.

The agreement covers the design and construction of 47km of motorways, six viaducts, 17 bridges and underpasses, and a 320m cut-and-cover tunnel.

Foreign truck firms are now being charged to use roads across the UK for the first time with the introduction of the heavy goods vehicle (HGV) road-user levy.

The new system, which started on 1 April, rolled-out approximately a year ahead of schedule and introduces a charge that supports UK hauliers in competing with their international counterparts.

UK truck drivers commuting in Europe pay tolls and levies while delivering goods abroad, but foreign trucks operating in the UK were not required to make a similar payment before the new system.

New glow-in-the-dark road markings on a highway stretch in the Netherlands were faded out as the strips were not water-resistant enough to survive large amounts of moisture.

The pilot project was launched mid-April to replace the standard streetlights on a 500m-long stretch of the N329 highway in Oss, the Netherlands.

European construction frim Heijmans, which is running the pilot with Dutch design firm Studio Roosegaarde, told the BBC that the road markings were sensitive to large amounts of moisture due to heavy rains, and were not emitting a consistent level of light.

The UK’s Highways Agency completed the latest section of a ‘smart motorway’ project on the M6 near Birmingham, resulting in improved journey times and less traffic congestion.

The opening of the ten-mile section between junctions 5 and 8 on the M6 marked a milestone for the agency, after several years of investment to improve the stretch.

Highways Agency project manager Rob Edwards said: "Drivers will reap the benefit of the government investing more than £111m on this stretch of the M6, with improved journeys and a boost for the economy." 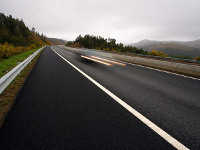 A consortium comprising Ferrovial and Acciona was selected as the preferred bidder for a Pacific Highway contract in Australia.

The project, which marks Ferrovial’s first infrastructure contract in the country, includes the designing and building of a 19.5km section of the highway between Warrell Creek and Nambucca Heads in New South Wales.

Expected to begin in the second half of 2014, new bridges over the Nambucca river at Macksville and Warrell Creek, and two new grade-separated interchanges will be constructed.

The university’s patented technology is based on steering wheel movements, which are more variable in the case of drowsy drivers.

The system uses inexpensive, easy-to-install parts, such as a sensor that measures the position of the steering wheel, and can be included as part of a factory installation or as an aftermarket accessory.

Engineering and services company Bilfinger won an order to construct the Eiganes Tunnel, which will significantly reduce the volume of traffic in the Norwegian city of Stavanger.

The project has total value of €230m and will be executed by a joint venture, of which 60% is owned by Bilfinger and the remaining 40% by Norwegian company Stangeland.

Works include the construction of a 5km-long twin tube tunnel, several access ramps as well as further connector tunnels.

Transport for Greater Manchester (TfGM) and Swarco Traffic teamed up for a project aimed at providing enhanced driver information on roads around the county.

Funded by the Department for Transport under the Local Sustainable Transport Fund (LSTF), the project is part of the wider LSTF initiative that is being carried out by TfGM to enhance network management.

The scheme also aims to provide accurate real-time traveller information to the public with the help of a wide variety of media.