Implemented to the east of Abu Dhabi, the project connects Mohammad Bin Zayed City to the Mussafah industrial area near Dalma Mall. The improvements are part of the city’s plan to upgrade its overall transport infrastructure to international standards.

It serves several new residential communities in Abu Dhabi and will improve traffic flow in one of the fastest growing communities with high traffic congestion.

The improvements to be undertaken include road, bridge, transit and bicycle/pedestrian paths among other works throughout Virginia. The announcement comes after considering public comments and their transportation priorities.

The programme will be updated later this year. 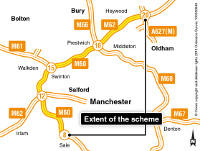 UK infrastructure group Balfour Beatty won a £184m project to upgrade a 17-mile section of the M60 and M62 motorways.

The upgrade is expected to increase capacity, reduce congestion and shorten journey times for motorists.

The project will be led by Balfour Beatty, in collaboration with the three other framework delivery partners; Costain, Carillion and a BAM Nuttall Morgan Sindall joint venture.

The African Development Bank Group (AfDB) approved a $47m loan for a project to improve the quality of the road connecting Manzini and Mbadlane in the area of Manzini, Swaziland.

The project will also provide easy access to the new international airport serving the entire population, as well as employment for more than 250,000 people in the city of Manzini.

India’s Ministry of Road Transport cleared Rs300bn ($6.6bn) worth of new projects that are to be executed in the next two years.

In a move to improve the country’s infrastructure, the ministry also aims to build 30km of roads a day from 2016.

The proposed road projects will be primarily implemented in the states of Jammu and Kashmir, Himachal Pradesh and Uttarakhand, as well as the north-eastern region. 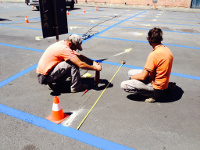 A smart city pilot was launched in Pisa, Italy, to test an intelligent parking system and analyse historic traffic data.

Sensors installed on the floor of each car park will detect if they are occupied or free, with several data units collecting the information and transmitting it over the mobile network to the city’s serverinfrastructure.

Skanska entered into a contract to design and build the new Kosciuszko Bridge in New York City, US.

In a Skanska-led venture with Kiewit and ECCO III Enterprises, the company will design and build new eastbound structures for the bridge, as well as demolish the existing bridge structures and buildings on acquired properties to clear the area for construction activities.

Videalert’s platform is a multipoint solution that uses standard off-the-shelf equipment and easily integrates with the council’s existing cameras and infrastructure.

The system went live in March and enables the council to enforce moving traffic offences such as bus lanes, banned turns and box junctions.