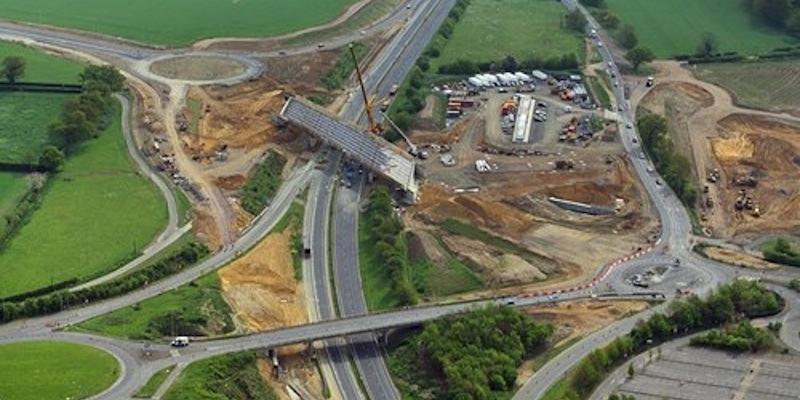 The NNDR is a 20km dual carriageway from the A47 east of Norwich to the A1067 Norwich to Fakenham Road, north of Taverham.

Work under the contract includes construction of a new 19.6km dual carriageway, including nine new roundabouts, seven new bridges, an underpass and a two-level junction.

With half of the world’s population residing in urban localities, and the number expected to increase by two billion over the next 30 years, over-stressed public transit infrastructure and increased road congestion will be issues that cities would face.

Google has been working with a small group of research partners in the European Union (EU) and the US to see if anonymised data about historical traffic patterns can resolve these issues.

Audi to build new mobility strategy with Somerville in US

Audi and the US city of Somerville, Massachusetts, signed a memorandum of understanding (MoU) to develop an urban strategy for the ‘smart city’ project.

The MoU was signed by Audi CEO Rupert Stadler and Somerville mayor Joseph A Curtatone.

As part of the urban strategy, technologies will be applied for automated parking, swarm intelligence, and the networking of cars with traffic lights in the city of Somerville, which is centrally located in the Boston metropolitan area, a region that has the fastest-growing economy after Silicon Valley, California.

The EU-funded SIMON project introduced a new smartphone app, which enables users with reduced mobility to navigate over various modes of transport, orientation and parking.

People can test the new SIMON Mobile app at the project’s test sites in Portugal, Spain, Italy and the UK.

The new application will provide access to significant information such as the location of parking spaces for disabled people and lifts and ramps at public transport stations.

SIMON Mobile users can quickly validate parking and look at their parking history with the app, as it is integrated with the new EU smart parking card. This aims to reduce illegal parking and keep spaces free for those who need them.

The Ford Motor Company and Germany’s Meyer-Hentschel Institute developed a unique suit that warns drivers of the consequences of driving under the influence of drugs such as cannabis, cocaine and heroin.

According to National Highway Traffic Safety Administration (NHTSA), almost 18% of all motor vehicle driver deaths are due to intake of drugs other than alcohol.

The ‘Drugged Driving Suit’ will be included into driver education programme Ford Driving Skills for Life.

Cycle Safety Shield comes with cameras and multivision sensors, which serve as a third eye for drivers and monitor blind spots around the vehicle.

These sensors provide real-time visual and audible updates to drivers, which help them to stay alert and avoid collisions.

Vector-Z is an upgraded version of the Vector family of cameras featuring higher resolution sensors provided on the scene overview and the ANPR cameras.

The latest version is equipped with motorised zoom and focus options.

According to Vysionics, these features make it easy to configure and use the camera.

Nokia navigation company HERE and the Dutch Ministry of Infrastructure and the Environment are evaluating a cellular network-based cooperative intelligent transportation system (C-ITS) deployment to bolster road safety and reduce congestion problems in the country.

This evaluation will focus on a system that uses regular commercial 3G and 4G/LTE cellular networks and location cloud technology and data analytics from HERE to link smartphones and other devices, road infrastructure and traffic management centres.

This system would act as a low-latency data exchange mechanism, wherein information that could impact a commute, for instance, an accident, would be appropriately communicated.