X
Advertise with us
cmsadmin 17 October 2012 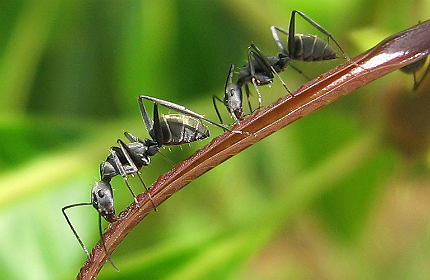 Frances Cook spoke with Dr Audrey Dussutour, a researcher at the Centre de Recherchessur la Cognition Animale in Toulouse, who has been working in collaboration with the University of Sydney, to research the collective behaviour of ants. Dr Dussutour explains how individual behaviours can be optimised to serve a collective good – and what this could mean for our future road networks and intelligent transport systems.

Frances Cook: Please briefly explain a bit about your work with ants and your area of specialism.

Audrey Dussutour: Collective movements, involving, sometimes, several thousands of individuals, are observed in a lot of organisms, ranging from bacteria to vertebrates. In most animals, however, these movements are unidirectional because they are linked to migratory phenomena and thus involve individuals moving in the same direction from one part of their foraging range to the other.

Along with humans, ants are one of the rare groups of animals in which collective movements are predominantly bidirectional. Ants are central-place foragers, which means that they retrieve food to their nest at the end of each foraging trip.

"Along with humans, ants are one of the rare groups of animals in which collective movements are predominantly bidirectional."

When exploiting abundant food sources, a lot of species lay chemical trails along which individuals commute, moving back and forth between their nest and the food sources.

In some species of ants the flow of individuals on these trails can be extremely high, reaching more than one hundred ants a minute.

All my studies so far have been devoted to study how ants deal with traffic jams…but I have never observed an actual traffic jam in ants…and I really tried hard, creating situations that promote the emergence of traffic congestion. Ants always found a solution.

What we’re interested in is how ants solve phenomenally sophisticated problems with exquisite rules of thumb that are simple and elegant and incredibly effective.

AD: The problem faced by ants in managing their traffic on foraging trails is the same as that faced by road engineers: since trails are costly to build and maintain for the colony, they should be used optimally. Ants are able to solve complex problems of traffic regulation by using simple rules that are not imposed externally and arbitrarily (as in vehicle traffic), but that result from local direct (contacts) or indirect (trail pheromone) interactions between individuals.

FC: Surely there are important differences between ant traffic and vehicle traffic?

Second, and most importantly, ants do not have the same mechanical constraints as pedestrians or vehicles: because of their small mass they have a low inertia and therefore are not damaged by collisions.

FC: How do ants minimise head-on encounters on a trail (even when they are carrying something, such a leaf) and how can we adapt what we learn from them to our road networks? What stands in the way of it working effectively in our human world?

AD: In leaf-cutting ants, I have shown that it is essentially the differences in size and locomotory rate that form the basis of the priority rules that generate oscillations in flow direction. Because laden returning ants have less manoeuvrability than un-laden outbound ants on narrow paths, they are given way to by the latter.

Outbound ants move to the side of the narrow path, allow the passage of the cluster of incoming ants, and return to the centre of the path. This behaviour prevents the fission of incoming groups of ants.

FC: What is the rule for approaching bottlenecks?

"Outbound ants move to the side of the narrow path, allow the passage of the cluster of incoming ants, and return to the centre of the path."

AD: In order to avoid traffic jams that could decrease the rate of food return to the nest, some ants organise their flow on a temporal basis with alternating clusters of inbound and outbound ants crossing narrow passageways.

This organisation limits the rate of time consuming head-on collisions and thus allows ants to maintain the same travel duration as that observed on wider paths.

As a consequence, a narrow path can sustain the same flow intensity as a wide path, which saves ants from engaging in the costly work of enlarging their trail to avoid a decrease of the rate of food return to their nest.

Ants arriving at a bottleneck give way to the ants coming from the narrow part of the trail, leading to an accumulation of ants at the level of the constriction. When the path is free, the waiting ants cross the narrow section of the trail.

FC: What happens when many ants want to use the trail – are more created to compensate for more ants? How can these results be used to help our traffic networks?

AD: A way one can avoid overcrowding and jamming on a narrow path is by selecting one or more alternative paths. This could seem to be an easy task but it isn’t, for humans and ants alike. In fact, in both cases the cohesive forces between individuals are generally much stronger than the dispersive forces.

Pedestrians or car drivers are reluctant to venture in the unknown and they often prefer to follow their fellows, even at the risk of crowding or being stuck in traffic jams.

Ants on the other hand, rely essentially on trail pheromone when travelling between their nest and a food source.

When faced with two narrow paths of equal length reaching the same food source, ants avoid being slowed down in traffic jams by dividing their flow equally between the two paths. This phenomenon occurs very rapidly before the traffic volume would begin to be affected by overcrowding.

FC: What part of your research could we use to improve our system of communication between drivers and cars?

AD: My studies are an example of how individual behaviours optimised to serve a collective good can ultimately benefit the individual as well. If humans would let a network take the wheel, these principles might manage our own congested thoroughfares. We essentially would have to hand over control of the vehicle to a collectively intelligent system that would move all vehicles from their source to destination, people would surely be reluctant but accidents would be virtually non-existent and travel would become much more efficient.

"Pedestrians or car drivers are reluctant to venture in the unknown and they often prefer to follow their fellows, even at the risk of crowding or being stuck in traffic jams."

If ants, in the experiment with leaf cutting ants, behaved like the average human driver, they’d routinely run head-first into each other, causing insect versions of pile-ups and gridlock. We calculated that patience reduced the average delay experienced by an individual ant crossing a crowded three metre bridge from 64 to 32 seconds.

One dominating factor in human traffic is egoism: drivers optimise their own travel time, without taking much care about others. This leads to phantom traffic jams which occur without any obvious reason. Ants, on the other hand, are not egoistic.

An experimental navigational system called Inter Vehicles communication tries to emulate this, with onboard navigation computers exchanging data as they pass each other and roadside base stations. It’s yet to be deployed in real-world conditions, though, reflecting the difficulty in replacing a culture and infrastructure of solitary driving. A compromise may be a system that improves communication between drivers and cars.

This has already been achieved by new devices which transmit information about abrupt velocity decreases to the following cars, which then start to brake automatically, before the driver even realises the need to brake.

I am optimistic about the potential of driverless cars running on ant traffic algorithms, but cautious about the timeline of their acceptance. Embracing such a system assumes that humans could agree on an upper speed limit, which has never yet happened.

Crowd-sourcing via smartphone apps and GPS devices is revolutionising the way in which traffic information is collated and analysed.

Mapping out the future – talking in-car data with TomTom