Fear of COVID-19 community transmission has been causing anxiety among the public as well as governments. Majority of the concerns in the public were related to fear of contracting the disease themselves and their families, according to a study conducted by the Journal of Anxiety Disorders.

Verdict has been running a poll since March 2020 to assess the level of health concerns related to the coronavirus spread, measured by the COVID-19 Concern Index.

Analysis of the ongoing poll’s results shows that the health concerns related to COVID-19 spread have declined since June compared to the preceding three months. 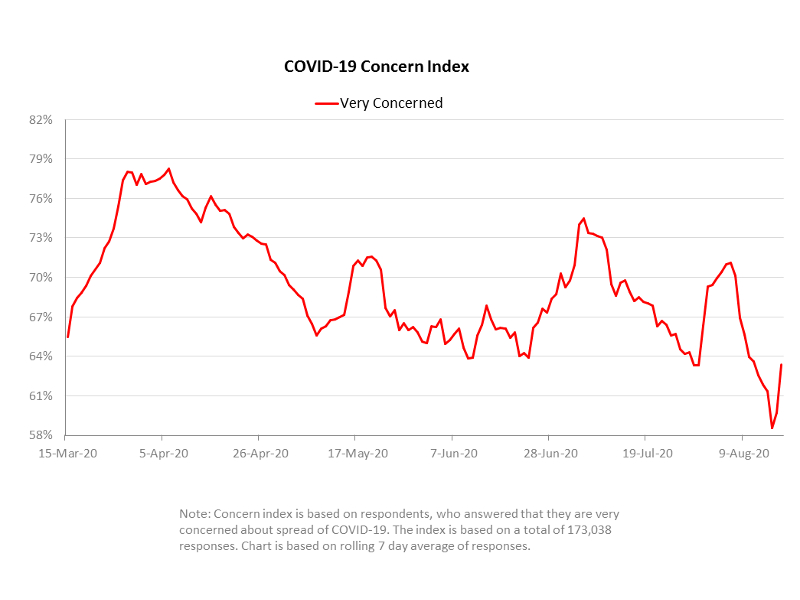 A majority of 71% of the poll respondents were very concerned about the spread of COVID-19 between March and May.

Concerns over COVID-19 spread decline between June and August

The COVID-19 spread concerns started declining from June, with the percentage of very concerned dipping below 65% between 19 and 24 June.

The concern levels surpassed 70% between 02 July and 05 July, however, which can be attributed to developments such as the World Health Organisation’s (WHO) announcement to discontinue clinical trials on the hydroxychloroquine and lopinavir/ritonavir combination to treat COVID-19.

The trials failed to show any efficacy in reducing the mortality rate. Hydroxychloroquine was until then considered to be a potential treatment for COVID-19 symptoms.

Experts’ warning that the COVID-19 virus may be airborne was another reason for concern during the period.

The very concerned percentage declined gradually thereafter from 06 July to 30 July to a low of 63.3%. The trend is sustained with the percentage standing at 65% between 08 August and 12 August.