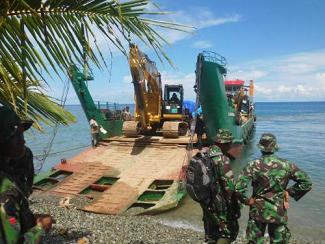 Australian infrastructure firm Global Road Technology (GRT) has been commissioned by the Indonesian military to construct and develop roads, for civilian use, at some of the most remote parts of the country.

Under the new contract, GRT will develop and deliver road infrastructure across 1,500km of the country’s border regions with the company’s specifically developed rapid deployment road stabilisation technology.

GRT Operations director Ben Skinner said: "The company is working directly alongside the Indonesian military, as part of a project that it is believed to be one of the most logistically challenging the infrastructure firm has undertaken.

"Firstly this project is unique as it marks the first time an Australian firm has worked directly with the Indonesian military on an infrastructure project such as this.

"This project is unique as it marks the first time an Australian firm has worked directly with the Indonesian military."

"Secondly it represents one of the largest undertakings by GRT in terms of having to develop a supply chain to service the military in remote border regions situated across the Indonesian archipelago."

As part of the deal, GRT is exporting specifically designed road stabilisation products using in-situ material to facilitate rapid deployment across border regions by the Indonesian military, while delivering significant cost saving to the government.

Initially, the company is using commercial airfreight to deliver product into Indonesia, before the transfer of the material to Military bases.

GRT said it will send 27 shipping containers of product from Brisbane every month to islands such as the remote Biak – north of Papua New Guinea, which are then shipped and dispersed to individual islands and carried into the jungle by hand for final application.

The company latest contract with the Indonesian military follows the recent announcement of a $110m deal as part of a joint venture with Pearls in India.