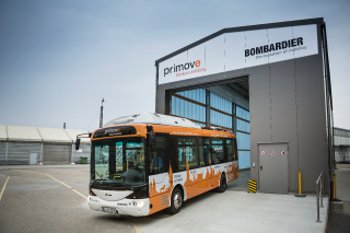 The charging station was designed for PRIMOVE electric buses in Germany and has been launched in partnership with the local transport operator Braunschweiger Verkehrs-AG.

Beginning December 2013, Braunschweiger Verkehrs-AG and Bombardier will change the service on the inner-city circular bus line M19 for a more environmentally friendly operation.

The development will mark the first time that electric buses will replace conventional buses.

Passenger services will begin with a 12m-long electric solo bus, followed by 18m articulated e-buses from the manufacturer Solaris.

Each electric bus will be equipped with the wireless PRIMOVE fast charging system and the new PRIMOVE high-power batteries.

The new inductive charging system will have a charging pad with an output of 200kW and will be used in Braunschweig to charge electric buses.

The PRIMOVE high-power charging pad is installed beneath the surface of the road, while the wayside electrical installation is integrated underground at the bus stops.

"The development will mark the first time that electric buses will replace conventional buses."

The cooling units for the power electronics have been integrated into an advertising pillar at the Braunschweig central station and into the bus stop.

With the PRIMOVE range, Bombardier said that it is smoothing the transition of transport providers and vehicle makers to electric mobility for all electric vehicles, including trams, buses, commercial vehicles and cars.

According to Bombardier, the commissioning of the first PRIMOVE fast charging station for electric buses in Braunschweig demonstrates that this vision is no longer just a dream but is becoming a reality.

In addition to Braunschweiger Verkehrs-AG and Bombardier, the Braunschweig Technical University and the energy provider BS Energy are involved as partners.

The programme is supported by the German Federal Ministry of Transport, Building and Urban Development.

Image: Each electric bus will be equipped with the wireless PRIMOVE fast-charging system and the new PRIMOVE high-power batteries. Photo: courtesy of Bombardier.