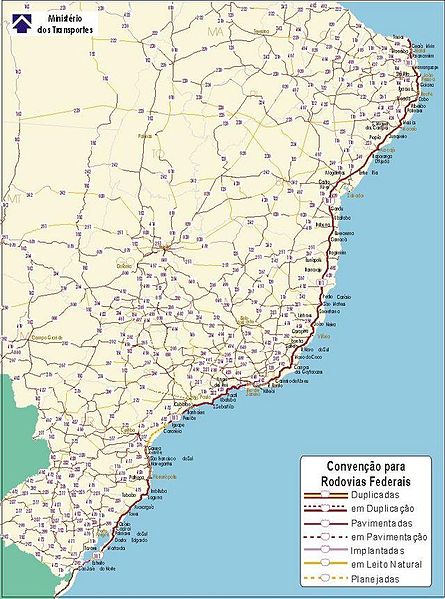 EcoRodovias had submitted the bid along with a consortium with SBS Engenharia e Construções.

The contract involves repairing, preserving, maintaining, improving and expanding the capacity of the road between its junction with the BA-698, where it goes into the municipality of Mucuri in Bahia, and the border between the states of Rio de Janeiro and Espírito Santo. The winning bidder will also operate the highway for 25 years.

Brasil’s federal highway BR-101, called the Translitorânea, starts at Touros city and ends at São José do Norte. It will run from the Espírito Santo-Rio de Janeiro state line to the town of Mucuri in the Bahia area and will have seven toll collection points.

Under the deal, the contractor will build 21.6km of side roads, pedestrian walkways and speed control equipment by the fifth year of the concession; it will also expand half of the route by the sixth year and the other half in the tenth year, according to bnamerica.com.

The other companies which competed in the bid include OHL Brasil, CCR, Triunfo Participações e Investimentos (TPI), and the Engevix-Isolux and Invepar-Odebrecht consortia.

Brazil is also considering sanctioning another agreement for the operation of two more highways by May this year.

Previously, Brazil’s Bahia state sought R$7bn ($3.89bn) to carry out a public-private partnership (PPP) project to build a bridge between state capital Salvador and Itaparica island. This forms part of the road improvement programme in Salvador carried out by the Bahia state and will be 11.7km long and 27m wide, with six lanes, as well as two hard shoulders, including a 160m movable segment.

Image: The stretch where the the 476km highway will run in Brazil. Photo: Ministério dos Transportes