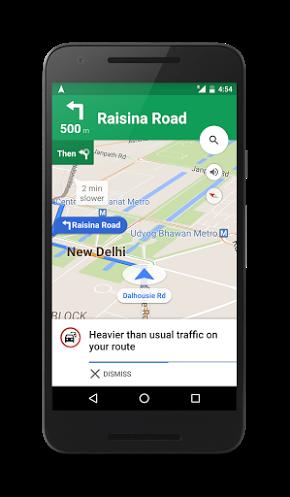 Google has updated its map for India to provide information on traffic jams, as well as suggest routes for users.

It will also help drivers find the most suitable routes to reach their destination with less traffic jam and delays.

The user needs to enter the destination on Google Map before starting for journey.

Once the destination is entered, the user will receive a voice alert regarding upcoming traffic conditions, allowing them to find the quickest route.

While travelling on a particular road, the app will also provide information on congestion that lies ahead, as well as the length of time the driver would be stuck in the jam.

The user will also be provided with alternate routes that are faster or evade traffic.

The updates will be made available once the navigation mode on the user’s smartphone is switched on.

In May 2015, Google introduced real-time traffic data in the US, reported The Next Web.

Drivers can use Google Maps to find their destination while stopping at various points on the way, cited Zee News.India.com.

The start and end points of the journey needs to be entered, after which the driver can also add stop points along the way in the trip.

This will allow Google Map to automatically generate the best route.