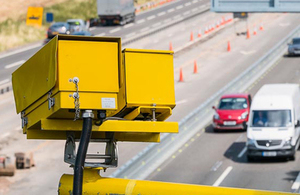 All grey digital speed cameras on England’s strategic road network will turn yellow by next October.

This move comes as earlier this year ministers had ordered a review of the speed camera policy on motorways.

In 2006, grey speed cameras were first introduced on the M42.

Highways England confirmed the new plan in order to increase the visibility of all speed cameras on the road network.

Transport secretary Patrick McLoughlin said: "We are on the side of honest motorists. I’ve always been clear that cameras should be visible and get used for safety rather than revenue raising. This move is about applying common sense to our roads.

"This move is about applying common sense to our roads."

"Speed cameras should make journeys safer rather than lead to dangerous braking."

England’s motorways have approximately 200 camera sites, and some of these sites have multiple cameras.

The present guidelines already make it clear that where cameras are used on the strategic road network, and signs will have to be put up in order to alert drivers.

Now the latest announcement will ensure maximum visibility of the cameras.

Most of colour changes will take place during regular renewal of speed camera units alongside other planned worka, in an effort to minimise costs.

Those units that are not due to be upgraded within this period will be painted yellow.

Meanwhile, Highways England will monitor the camera sites in order to address any impacts the change in colour will have on motorists.

Highways England chief executive Jim O’Sullivan said: "We also are on the side of common sense, and aim to provide a good service to road users. While we understand speed cameras are not popular, they play a valuable role in enhancing safety, smoothing traffic flow and reducing congestion for millions of motorists who use our roads.

"We use cameras for safety and traffic management only when other more popular solutions like engineering are not adequate to tackle particular problems on our network."