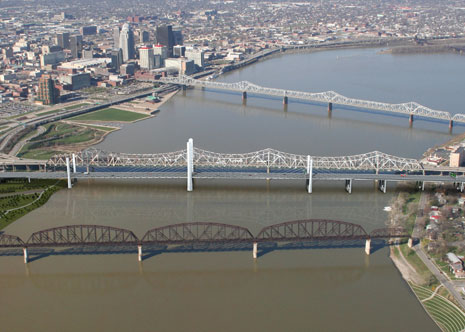 The US states of Kentucky and Indiana have signed an agreement to share the $2.6bn cost of the Ohio River bridge project, with Indiana building the East End bridge and Kentucky constructing the downtown stretch.

Under the agreement, both states will share the cost equally, with bidding planned to be complete this year.

Kentucky Transportation cabinet secretary Mike Hancock said: "By 2018, hopefully, you’ll find both bridges open to traffic. If we’re successful with a good bidder, by the end of next year we could see contractors mobilising to do work."

Under the agreement, Kentucky will construct a new Interstate 65 bridge, rebuild the Kennedy Bridge, modernise the Kennedy Interchange, expand the Interstate-65 approach in Indiana, as well as rebuild Spaghetti Junction, where interstate highways 64, 65 and 71 intersect.

Indiana will build the bridge between Utica in Indiana and Prospect in Kentucky, as well as a new highway linking the Lee Hamilton Expressway and Gene Snyder Freeway, in addition to a tunnel in eastern Jefferson County.

The new bridges are expected to relieve traffic congestion and meet future transport demand in the region.

Hancock said that the agreement has been signed after negotiations between governors of both states, transportation officials and project leaders, as the US states could not reach a consensus on a single method for contracting the construction of the project.

The current cost is estimated at $300m less than the initial price announced in 2011, as well as $1.5bn less than the original cost of $4.1bn, which the states plan to pay through tolls and transportation funds.

Hancock also stated that the cost savings are because of completing the entire project by 2018, which is four years earlier than previous estimates, as well as minimising inflation increases.

The Louisville and Southern Indiana Bridges Authority will coordinate the construction projects, combining the projects under a single financial plan.

Caption: The new Downtown Bridge is shown in the middle next to the Kennedy Bridge. Courtesy the Ohio River Bridges.