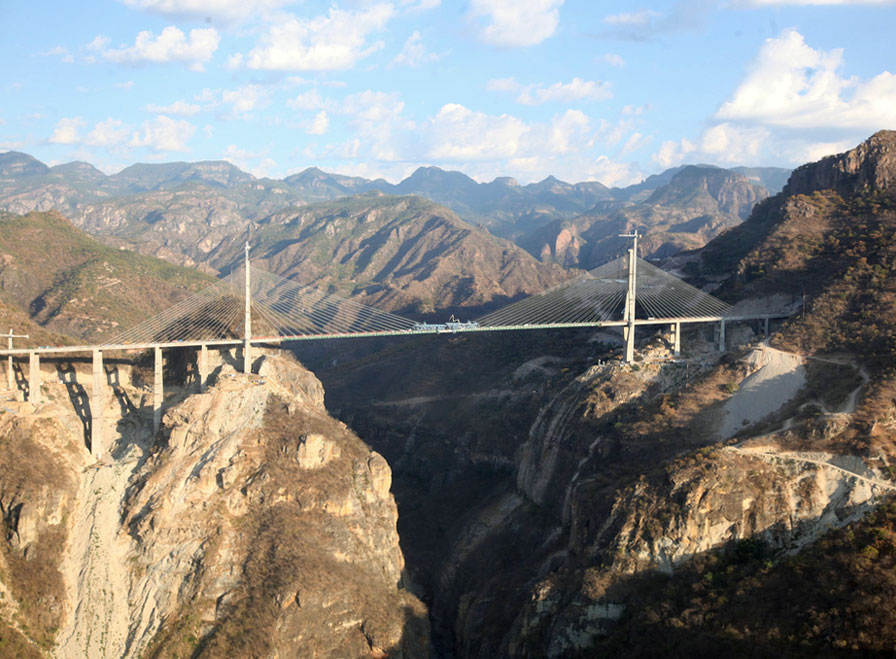 Mexico’s new cable bridge, built at a cost of MXN2bn ($146m), has been officially recognised as the highest in the world.

The Baluarte Bridge is 1,124m in length and 20m wide; it has been constructed across the deep ravine in the Sierra Madre Occidental mountains in the north of the country. Mexico’s president Felipe Calderon said: "Megaworks such as Baluarte Bridge meet the challenge of providing more and better road links for the country. They also bring people closer to their destinations, which will facilitate trade and enable Mexico to take advantage of its privileged geographical position through improved infrastructure and logistic capacity."

The structure is supported by 152 steel suspenders, with a 520m central span and four lanes suspended at a height of more 400m, taller than the 324m Eiffel Tower. The new bridge will help connect the country more efficiently and provide an access route for communities facing isolation caused by large distances.

The bridge forms part of the Durango-Mazatlán Highway linking the ports of Mazatlán and Matamoros built at a cost of $1.4bn. This highway, which also forms part of the Mazatlán-Matamoros highway axis, will reduce travel time between these two cities by about six hours for haulage transport.

The Baluarte Bridge, on the Durango-Mazatlán highway, overcomes the challenge of crossing the intricate Sierra Madre Occidental as well as supports tourist development in the zone, by encouraging the use and development of the port of Mazatlán, as well as promoting tourism on the coast of Sinaloa. The structure will also allow commuters to avoid the jagged peaks of the Sierra Madre Occidental known as ‘the Devil’s Backbone’.

A consortium of Tradeco, Idinsa and Corey and VSL México are carrying out the construction work of the bridge, which is now 86% complete and is scheduled to be complete by the end of this month. The opening of the bridge will be part of the celebrations to mark 200 years of Mexico’s independence from Spain.

Construction has been going on for more than four years and the bridge is expected to be used by around 2,000 vehicles a day.