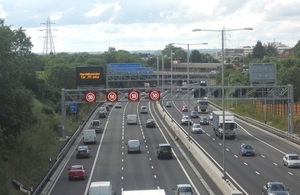 The UK Government has accepted the planning application for the £1.5bn A14 Cambridge to Huntingdon road improvement scheme, which involves the improvement and upgrading of the 23-mile stretch of the highway.

The government’s planning inspectorate has accepted and examine plans for the new bypass, widening the existing A1 and A14, improvements to Huntingdon Town Centre and new local access roads in Cambridgeshire.

The Highways Agency received more than 1,400 responses, including 1,152 completed questionnaires, during a formal consultation on the scheme in 2014 as a result of which several design changes were made to the proposal.

The consultation, which took place between April and June, found that 85% of those who answered the questionnaire agree the A14 needs improving, and 51% agreed with the proposed solution.

"This vital investment will relieve congestion on one of the busiest parts of this strategic network between the Midlands and East Anglia."

Mike Evans from the Highways Agency’s A14 Cambridge to Huntingdon project said: "Once completed, this vital investment will relieve congestion on one of the busiest parts of this strategic network between the Midlands and East Anglia and will support both national and economic growth.

"We received a high number of responses during the consultation last year. We listened to the feedback, and where we could, we have made several changes to the design for the A14 Cambridge to Huntingdon improvement scheme."

As part of the improvement scheme, a new major bypass will be constructed between Swavesey and Brampton, and the A1 section between Brampton and Alconbury will be widened.

The planning inspectorate examines the plans as part of an application for a development consent order.

Work on the new scheme is slated to get underway in 2016 and the new bypass and widened A14 would be open to traffic in 2020.

The application for the proposed A.14 Cambridge to Huntingdon improvement scheme was submitted on 31 December and the decision to accept the application to proceed was made on 27 January.

Image: The £1.5bn A14 Cambridge to Huntingdon improvement scheme gets acceptance. Photo: courtesy of UK Government.