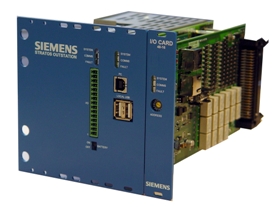 Engineering firm Siemens has launched the first phase of its Stratos Outstation development for road authorities in the UK.

It will also supports the current Siemens UTC applications that support UTMC communications.

A Siemens Outstation Support Server can be used to update the outstation firmware.

"This initial release is part of the ongoing progression towards providing fully-featured Stratos outstation functionality."

The company said installed units will be easily updated to offer the new Stratos functionality without the need of a site visit.

‘Because Stratos outstation functions will be provided by a single outstation platform, it will no longer be necessary to use different platforms for UTMC control or remote monitoring applications, providing a cost-effective implementation on-street, whilst minimising the requirement for large spares holdings and simplifying maintenance requirements."

Manston added that the first phase of Stratos Outstation will offer UTMC, OTU and MOVA functionality similar to the Gemini 2 UTMC OTU.

It will use Arm processor technology and a fully-featured Stratos outstation functionality will shortly be developed as part of company’s plan to develop a cloud-based traffic management system.