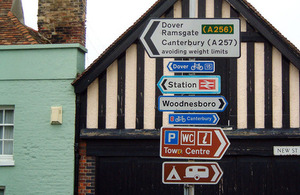 The UK Department for Transport (DfT) has announced a new taskforce dedicated to removing pointless road signs, in order to make roads safer and navigation easier for motorists and declutter roads.

As part of this project, MP Sir Alan Duncan will oversee the taskforce, while a consultation proposes a range of new measures. These will include ensuring road signs that are used far longer than needed, have a ‘remove by’ date; making sure that traffic signs are visible on unlit roads, as well as stop temporary message signs from being cluttered with adverts and distracting logos.

"We have already made much progress but Sir Alan Duncan’s new taskforce is an important step towards striking the right balance."

The UK is renowned for having one of the best traffic signing systems in the world, but is now widely viewed as out of date, meaning some signs are either confusing, redundant or both.

"We have already made much progress but Sir Alan Duncan’s new taskforce is an important step towards striking the right balance."

In 2013, the DfT conducted a research to inform the Traffic Signs Policy Review and it showed that the number of traffic signs across the country has doubled in the last 20 years.

The taskforce will make practical suggestions for removing clutter and ask whether some signs can be removed altogether.

It will also look at what can be done to change the culture within local authorities to reduce signing, and consider the factors that lead to sign clutter.

In order to allow local authorities to make a difference without having to wait for new regulations, the DfT has already relaxed requirements for design and placing of some signs, and new robust advice has been published to help local authorities declutter roads.

For the last three years, the DfT has also sponsored the Chartered Institution of Highways and Transportation Reducing Sign Clutter award, to highlight and reward good practise by local authorities.

The consultation will close on 6 October and the taskforce will start work soon and present its recommendations to government by December.

Image: The UK DfT has announced a new taskforce and consultation to obliterate pointless road signs. Photo: courtesy of the UK Government.