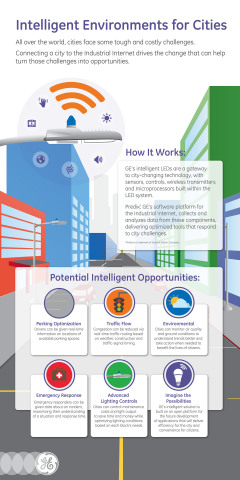 The cities of San Diego and Jacksonville in the US are set to begin pilot of GE’s new LED technology, which is driven by the company’s Predix software platform.

The new intelligent-city-enabling technology uses LED streetlighting installations to connect, collect and evaluate data that is being generated and help the cities to run better.

GE is developing various solutions that will help cities solve the problems linked to high street lighting costs to traffic congestion, parking allotments and emergency response, with the help of their existing infrastructure.

A city will be able to cut down costs and optimise its operations by repurposing streetlights with LEDs containing sensors, controls, wireless transmitters and microprocessors, which further creates better services for residents.

"We will be working with the cities to analyse data trends and determine where the solution holds the most value and how it will ultimately be used."

GE Lighting president and CEO Maryrose Sylvester said: "This solution truly presents endless possibilities for cities to learn, connect and improve both their operations and everyday life for their citizens.

"In the pilots with San Diego and Jacksonville, we will be working with the cities to analyse data trends and determine where the solution holds the most value and how it will ultimately be used."

Networked LED streetlights have the ability to reduce parking downtown issues as they have built-in sensors and wireless transceivers to direct drivers to available spaces.

Working as a sensor, the streetlight will also have the potential to give prior warnings during any hurricane or other event through a public-address speaker hidden within the light post.

Set to pilot the new GE technology later this year, Jacksonville also plans to trial LightGrid wireless control technology that allows for better streetlight management and will provide energy savings to the city.