The Bandra Cable-Stay Bridge will be opened in January 2009. 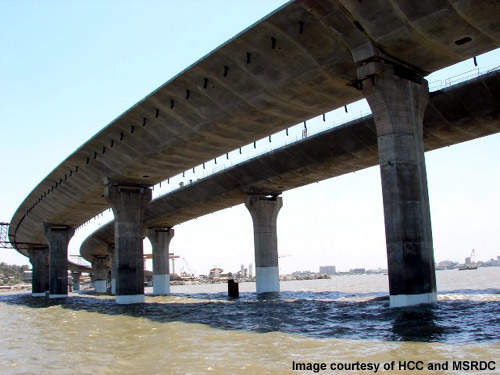 There are twin decks on these pre-cast segment viaduct sections. 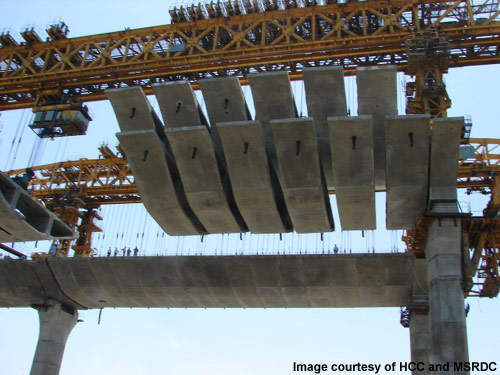 Pre-cast segments being lifted into place on the Bandra Cable-Stay Bridge. 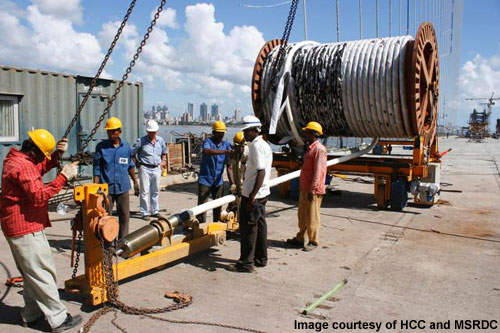 Cables are supplied in a galvanised form and are rigorously tested before use. 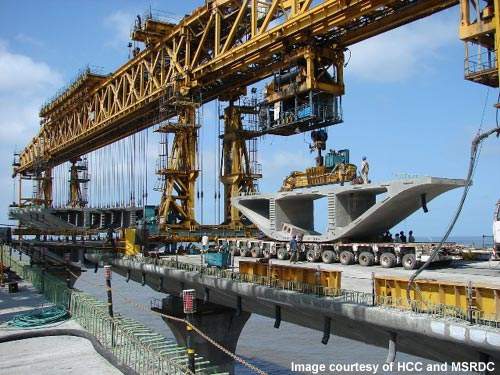 Launching trusses are used to lift the segments into place. 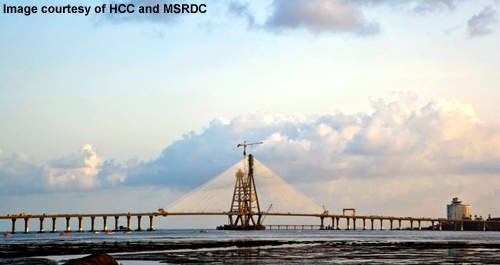 The middle cable-stayed section of the Bandra Cable-Stay Bridge can be seen.

The Bandra Cable-Stay Bridge is part of the Bandra Worli Sea Link (BWSL) project, which is an integrated highway and bridge project that will link Bandra and the western suburbs of Mumbai with Worli and central Mumbai. BWSL was officially named as Rajiv Gandhi Sea Link in July 2009. The bridge has an average traffic of 37,500 vehicles per day.

The project is one of the most complicated civil engineering projects in India and will form the first phase of the proposed West Island Freeway system. On 27 May 2008 a major milestone was achieved in the project when the cable-stayed bridge was connected to the approach spans to give a completed link. The construction of the bridge, delayed due to payment disputes and fishermen protests, was completed in April 2009 with allied works completed by 31 May 2009. The bridge was completed and opened to public on 30 June 2009.

The traffic wishing to cross the Bandra Channel had to use the Mahim causeway linking Mahim to Mumbai, a journey of only 8km that took over an hour during the rush hour (often carrying over 140,000 vehicles a day). In contrast, the new BWSL shortens the journey to 4.7km, offer more capacity and shorten the travel time to only six minutes.

The BWSL is an eight-lane highway (two, four-lane roads) over a cable-stayed bridge with pre-stressed concrete viaduct approaches (and two dedicated bus lanes). The bridge structure and surrounding infrastructure consists of:

“The BWSL is being developed as an ‘intelligent bridge’ with state-of-the-art system monitoring, surveillance, information signage and emergency support.”

The original design was changed to include two separate towers for the main cable-stay bridge.

Also the bridge was realigned around 150m into the sea and an additional cable stay bridge was introduced at the Worli end.

Increasing the height of the bridge accommodates the demands of local fishermen of Worli Koliwada to aid the movement of their boats under the bridge.

The BWSL is being developed as an ‘intelligent bridge’ with state-of-the-art system monitoring, surveillance, information signage and emergency support.

The construction of the BWSL was awarded in five packages.

Package III: construction of solid approach road from the Mahim intersection up to the start of the toll plaza on the Bandra side and a public promenade (opened in February 2003) – consultants: M/s Sverdrup Asia Ltd, KPMG (India), TPG (India), C. Felice and Co – construction: Prakash Construction and Engineering Ltd.

Package IV: construction of cable-stayed bridges together with viaduct approaches extending from Worli up to the toll plaza, intelligent bridge system (IBS). HCC has a five-year liability period for maintenance of the bridge. The south bound carriageway was commissioned in July 2009 and remaining works are in progress.

Package V: improvement to KAGK Road, which is in progress.

“The project employed about 4,000 workers and 150 engineers during peak construction.”

In December 2006 when work on the BWSL was progressing and the Asian Hercules (weighing 5,600t and owned by and hired from Asian Lift), the world’s largest floating shear leg crane was used to lift a 1,260t 110m-long launching truss into place on the Worli side of the bridge.

Two launching trusses (one on each end) were used to lift the precast concrete segments of the bridge deck into place. Each launching truss could lift 15 x 130t segments into place at once and were then crawled across the sea bed to fit segments on the next pillar.

The design of the bridge was by Dar Al-Handasah Consultants and the Jacobs Engineering Group Inc. The geotechnical engineering was carried out by Lachel Felice & Associates Inc. The main contractors were Hindustan Construction Company and their foreign partner China Harbour Engineering Corporation.

The expansion joints were supplied by Mageba SA, the launching of pre-cast segments was carried out by Freight Wings Pvt Ltd and the stay cables were sourced from Shanghai Pujyang Cable Company. M/s Dar Consultants were asked to design, proof check and supervise the various aspects of the project.