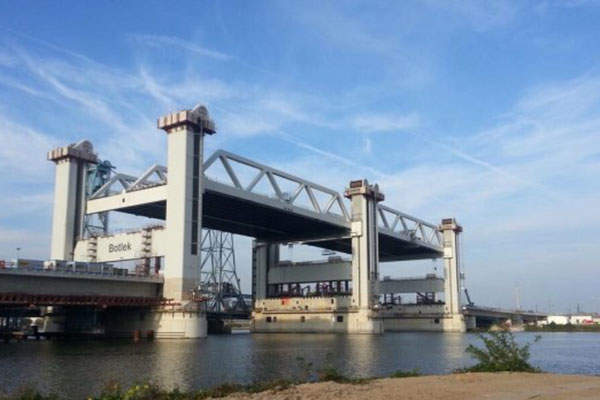 The two decks of the new Botlek-Bridge are suspended on six towers. Credit: Strukton. 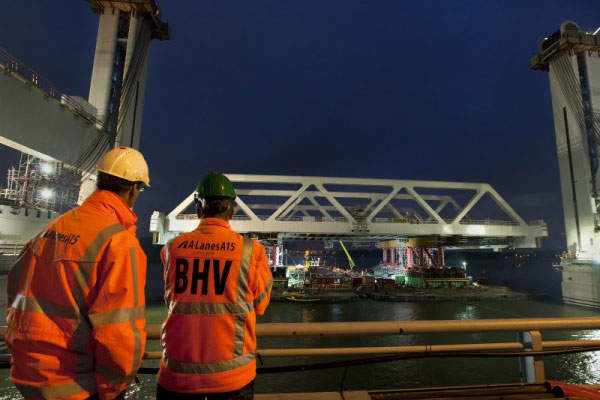 The general contractor for the project is the A-Lanes A15 joint venture (JV). Credit: Strukton. 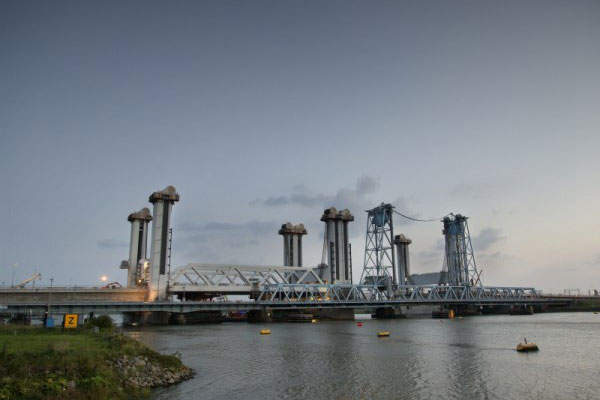 The maximum lifting height of the new bridge will be 45m. Credit: Strukton. 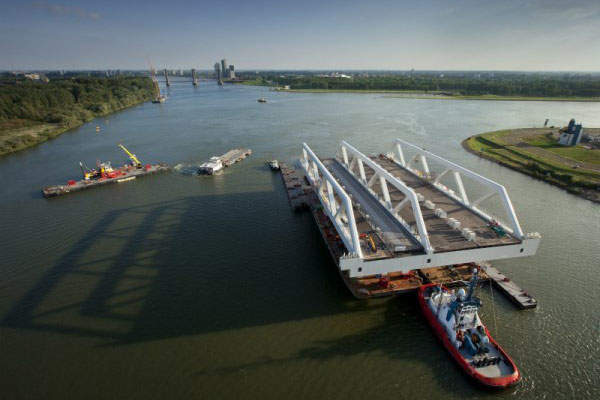 Separate components of the two decks were manufactured in Germany and assembled in Rotterdam. Credit: Strukton.

The new Botlek-Bridge is a moveable/lifting bridge that is being constructed to replace the existing Botlek-Bridge, as part of the larger A15 motorway expansion project named A15 Maasvlakte – Vaanplein (MaVa) in the Netherlands.

The larger project aims to handle the anticipated increase in traffic due to the construction of APM Terminals’ Maasvlakte II facility in Rotterdam.

The new bridge, which is expected to be one of Europe’s biggest moveable bridges, is being constructed adjacent to the existing Botlek-Bridge, traversing the Oude Maas River. Construction began in mid-2011 and is expected to be completed by December 2015.

The bridge replacement project will remove a bottleneck for ships, caused by the existing low and narrow moveable bridge’s limited navigation clearance and improve the flow of road traffic, which is currently hampered due to frequent lifting of the existing bridge.

Details of A15 Maasvlakte – Vaanplein (MaVa)

The larger A15 MaVa project involves the expansion of approximately 47km of the A15 motorway between Maasvlakte and Vaanplein.

It also involves the construction of a new bridge, renovation of the Botlek and Thomassen tunnels, a revamp of 36 existing structural works, the development of 12 new structures and installation of new traffic management systems.

Design of the new Botlek-Bridge

It features two spans, each measuring 90m-long, 50m-wide and 14m-high above water level. Installation of the bridge’s two steel decks weighing 3,750t each was completed in September 2014.

The two decks are suspended on six 64m-high lifting pillars, each of which is installed with two sets of red cable pulleys. The bridge’s 2,500t counterweight is constructed of a pre-stressed concrete beam.

Concrete sections of the counterweight are 45.5m-long and 8m-high.

An estimated time for lifting and lowering the bridge is 120s, equivalent to one time an hour or 9,000 times a year. The separate components of the two decks were manufactured in Germany and assembled by Mammoet at Rotterdam.

Contractors involved with the Botlek-Bridge replacement

The design, build, finance and maintenance (DBFM) contract for the A15 MaVa project was awarded to A-Lanes A15, a joint venture (JV) between Strabag, Ballast Nedam, Strukton and John Laing in September 2010 by the Directorate-General for Public Works and Water Management of the Netherlands Rijkswaterstaat.

The architect for the bridge is Quist Wintermans Architekten in the Netherlands. In April 2012, Waagner-Biro was contracted to design, supply and install the bridge’s drive components, electronics and controls, as well as hydraulic systems associated with counterweight and lifting systems.

Oranjewoud was appointed for traffic analysis, and Allen & Overy, BNP Paribas / RebelGroup and Marsh were appointed to advise on legal, financial and insurance aspects of the A15 MaVa project, respectively.

U-shaped sleeve pipes comprising water pipes and plastic ducts, through which data and power cables are drawn, were assembled at Van der Vlist’s Moerdijk terminal and transported to the project site by Mammoet.

The software to operate and control the new bridge was supplied by ICT. Blomsma Signs & Safety was awarded the contract in May 2015 to provide the bridge’s safety signs and symbols.

The overall investment for the A15 MaVa project is estimated to be €1.5bn (approximately $1.69bn), which is being fully arranged by A-Lanes A15.