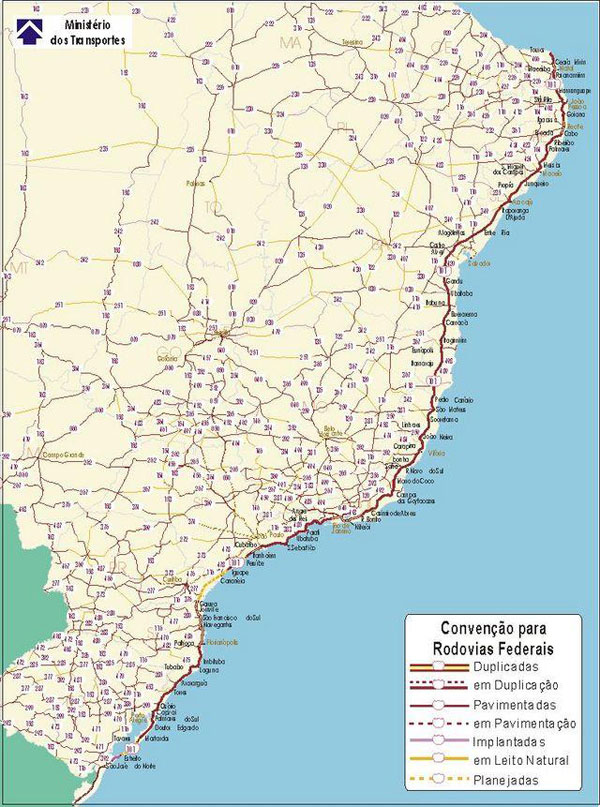 A map showing the BR-101 Highway in Brazil. It is a part of the Pan-American Highway. Image courtesy of Dada. 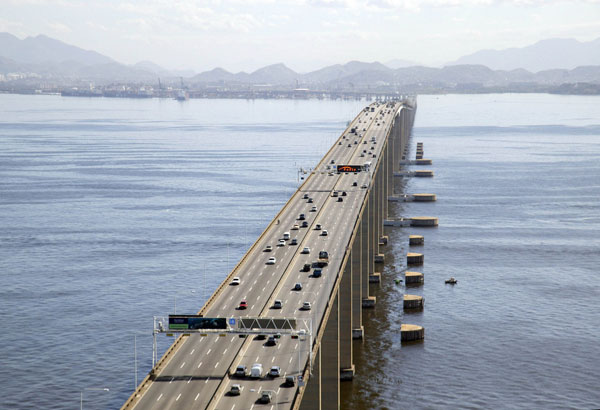 BR-101 Highway runs across the Rio-Niteroi Bridge at Guanabara Bay, in the state of Rio de Janeiro in Brazil. Image courtesy of Arthur Boppré.

BR-101 is a highway which runs the length of Brazil from north to south across a distance of 3,000 miles (4,828km), passing through as many as 12 Brazilian states. It is the major Brazilian highway, which forms a part of the Pan-American Highway. BR-101 highway is also known as Translitorânea.

It is a major component of the Brazilian Highway System, the fourth largest highway network in the world.

The highway is being expanded in the state of Espírito Santo. The main contract for the project was in place by January 2012.

Route of the BR-101 through 12 Brazilian states

“In January 2012, a consortium led by EcoRodovias was awarded a contract worth $1.21bn to expand and operate BR-101 highway in the south-eastern Brazil’s Espírito Santo state.”

BR-101 highway extends from the city of Touros in the north to São José do Norte in the south of the country. It passes through 12 Brazilian states, including Rio Grande do Norte, Paraíba, Pernambuco, Alagoas, Sergipe, Bahia, Espírito Santo, Rio de Janeiro, São Paulo, Paraná, Santa Catarina and Rio Grande do Sul. It also links more state capitals than any other roadway in the nation.

The highway runs along the entire east coast of Brazil, from Rio Grande do Norte to Rio Grande do Sul. BR-101 was not constructed between two segments extending from Peruíbe to Iguape and Cananéia to Garuva.

The northern section extending from Curitiba to the border with São Paulo was not constructed to preserve the area which is part of the Atlantic Forest.

BR-101 highway also includes the Rio-Niteroi Bridge at Guanabara Bay. It is the longest pre-stressed concrete bridge in the southern hemisphere.

BR-101 highway underwent several upgrades since its construction. The first section was widened between Rio de Janeiro and Cubatão in 1973. A stretch between Cubatão and Curitiba was widened during 1980s by the Paraná government. The federal government widened a segment between Curitiba and Florianópolis in the 1990s.

Other notable expansions undertaken by the Agência Nacional de Transportes Terrestres (ANTT), Brazil’s overland transportation regulatory authority, include the widening of a segment from Palhoça to Osorio and a stretch between Natal and Palmares.

About 750km of the highway was rehabilitated and expanded as part of the project. It was the first federal highway to be constructed as a concrete road. The Brazilian Army also contributed to the work to speed up the completion of the upgrades. Equipment and systems from Ciber and the Wirtgen Group were used for the project.

Expansion of the BR-101 highway in Espírito Santo

In January 2012, a consortium led by EcoRodovias was awarded a contract worth $1.21bn to expand and operate BR-101 highway in the south-eastern Brazil’s Espírito Santo state.

“It is the major Brazilian highway, which forms a part of the Pan-American Highway. BR-101 highway is also known as Translitorânea.”

The consortium is composed of EcoRodovias (80%) and SBS Engenharia (20%). The toll rate proposed by the company was 45.6% less than the ceiling price set by the federal government. The concession has a 25-year term and is part of Phase III of the Federal Highways Grant Programme.

The BR-101 in Espírito Santo state covers a distance of 476km and connects the border between Rio de Janeiro and Espírito Santo with the Mucuri in the state of Bahia. The operator will improve and expand the motorway by doubling the present carriageway and installing new toll stations.

Under the contract, EcoRodovias is responsible for the construction of 21.6km of side roads and pedestrian walkways along with the installation of 30 speed control equipment by the fifth year of the concession term. The contractor will require expanding 50% of the route by the sixth year and the other half by the tenth year.

The expanded highway in Espírito Santo state will be installed with seven toll plazas. The toll rate charged for each kilometre will be R$0.034. The toll collection centres will be located in the towns of Pedro Canario, Sierra, Mimoso, St. Matthew / Jaguaré, Linhares / Aracruz, Old Town / Guarapari and the New River South / Itapemirim.