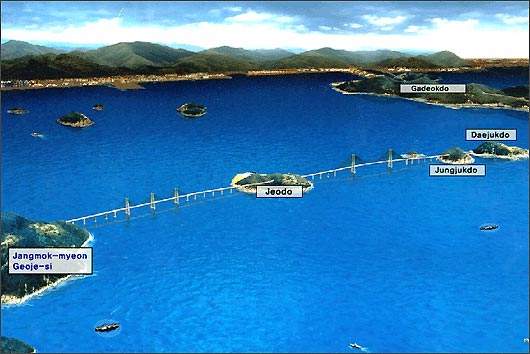 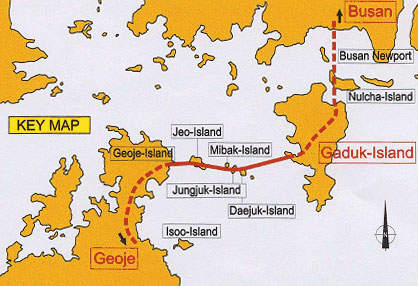 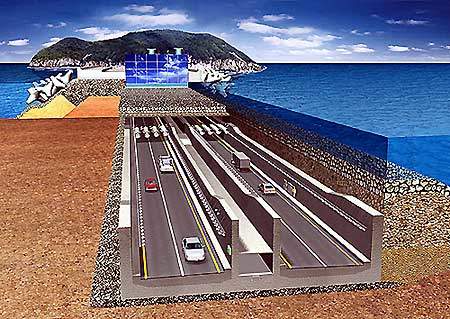 The total length of tunnel will be approximately 4km, with 270m portals connecting the tunnel to the bridge section and Geoje Island. The tunnels are to be designed for two-lane traffic with emergency / crawler lane hard shoulder.

Construction started early in 2004 on an 8.2km motorway between Busan – Korea’s southernmost, second largest city – and the island of Geoje. Of this 8.2km, four-lane fixed link, there will be 4km of immersed tunnel and two 2km cable-stayed bridges. It is thought that the immersed tunnel will become one of the longest in the world to date, especially in an area where there is so much seismic activity.

The link is expected to be completed by December 2010, and total project costs have been estimated at $1.9bn. The current journey to the island takes over three and a half hours driving time over an out of the way route of over 140km or involves using the ferry; the new link will cut the journey time to one hour (60km).

KDB, a leading bank throughout northeast Asia, has provided the majority of the funds for the fixed link (Won 1.1 trillion). This is claimed to be the biggest project finance deal in Korea in 2003. $375m is to be provided by a Government Supported Fund, with $883m being sourced from a Civil Fund. COWI has been awarded DKK160m ($25.4m) for its involvement in the project design.

The contract for the project manager on this project was awarded to Daewoo Engineering and Construction Co Ltd of Seoul, Korea. COWI A/S, a Denmark-based company that has recently formed a consultancy in Korea, is Daewoo’s lead consultant.

UK-based Halcrow, in a joint venture with Tunnel Engineering Consultants (TEC) of The Netherlands, are technical advisers to Daewoo E&C Co Ltd. Halcrow/TEC is advising Daewoo on design and construction, contract and contract strategy and project organisation.

Supporting these companies are Daewoo Construction (builders), DM Engineering (subconsultant for the bridges) and Arcadis’ French subsidiary which will independently check the design of the project components.

“The new link will cut the journey time to the island to one hour.”

COWI Traffic Planning is designing an intelligent traffic System (ITS) for the tunnels and bridges making up the link.

The total length of tunnel will be approximately 3.7km, with 270m portals connecting the tunnel to the bridge section and Geoje Island. The tunnels are to be designed for two-lane traffic with emergency / crawler lane hard shoulder. Running between the two carriageways will be a service lane / escape route.

The immersed tunnel was placed at a maximum water depth of 50m – the deepest road tunnel ever constructed. 18 precast tunnel elements (fabricated by Daewoo in Ajung and weighing up to 50,000t) will make up the tunnel, and will be floated into position and sunk into a pre-dredged trench. Challenges faced include ensuring water-tightness of the joints, preparing the tunnel supports and the actual placing of the sections.

Protection of the immersed tunnel using CORE-LOC technology started in February 2007 and is being undertaken by COWI (Denmark), Daewoo E&C Co and Han Jun Construction. The waterproof seals for the tunnel are being provided by Trelleborg Bakker but it is a bigger project than they have handled previously.

“The immersed tunnel was placed at a maximum water depth of 50m – the deepest road tunnel ever constructed.”

The latter bridge, with its three pylons, is a seldom-used design (will connect Jeo and Geolje islands). The main cable-stayed bridges will be comprised of composite steel and concrete superstructures, and concrete towers linked by stay cables.

The approach viaducts will be comprised of steel pate girders with a composite deck slab supported by concrete piers located in the seawater.

Heavy caisson foundations (2,600 to 3,000t) have been pre-cast and will be lowered and guided into place at a depth of 30m (caisson design varies according to their position in the structure). At selected locations, piled foundations will also be used.

An additional project consists of an eight-lane expressway network, linking the Daejeon-Tongyeong-si highway with Daegu-Busan highway, in a U-type link. This will become the National Road (NR) 58 and will stretch for 17.6km. It will cost an estimated $303m and is expected to take up to six years to complete. A further 7.9km Gadeokdo Cheonseong-dong to Noksan Industrial Complex, Busan – a six-lane highway – will be built concurrently with the other land-based roads, at an approximate expense of $241m.