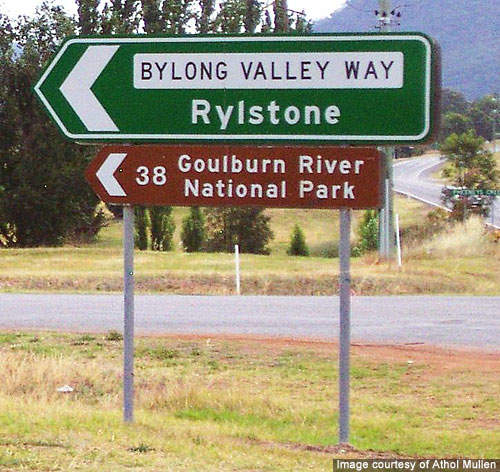 A direction sign of Bylong Valley Way erected at the Golden Highway. 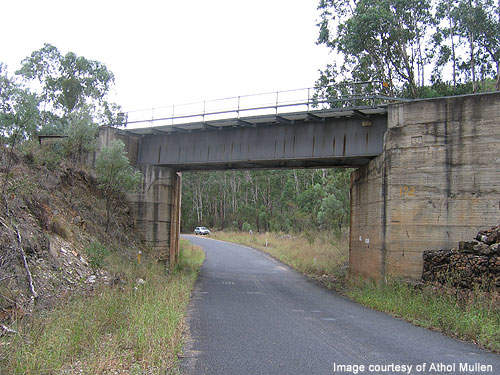 Bylong Valley Way, located in New South Wales, is a 137km-long fully sealed all-weather country road that provides a link between the Golden Highway at Sandy Hollow and the Castlereagh Highway at Ilford. Named after the Bylong Valley, the roadway is an extension of the Tablelands Way and is part of the Greater Blue Mountains Touring Route.

The major part of the Bylong Valley Way route lies between the Wollemi and Goulburn River National Parks, which are rich in animal and bird life. The route also provides an opportunity to discover Aboriginal and early European heritage of the region.

After completion of road sealing, the picturesque route is being promoted as a tourist route by the Muswellbrook Chamber of Commerce and Industry.

The sealing of Bylong Valley Way was started in the 1950s, with the first sealing completed between Ilford and Rylstone.

After being halted for a long time due to political issues, further sealing work had started in 1990 at a cost of $1.5m. Rylstone council had contributed $150,000. After continued lobbying for funds, the Mid-Western Regional Council was able to obtain $4.1m from the Federal Government to complete the sealing.

“The Bylong Valley Way has several bridges along its route.”

The final 32km of unsealed road was sealed in three stages in three years.

Stage One involved sealing of two sections in the south of Bylong. A total of 6km of the road was sealed between March 2007 and June 2007. The remaining 9km-long unsealed road was also widened in order to facilitate later stage sealing.

In Stage Two, a total of 12.42km of two unsealed sections to the south of Bylong was sealed between July 2007 and June 2008. Preparatory works for the third stage sealing were also initiated during stage two.

Stage three was started in July 2008 and completed in March 2009. Two sections east of Bylong, with a combined length of 12.6km, were sealed during the third stage.

The task of sealing the Bylong Valley Way had been under way for a long period of time. Annual funding for the sealing was provided by the NSW Regional Roads Repair Program. The project was also funded by Federal AusLink. The fully sealed Bylong Valley Way was opened to public in April 2009.

“The task of sealing the Bylong Valley Way had been under way for a long period of time.”

The section of Bylong Valley Way that is located east of Bylong is known as MR208. This section turns off towards Ulan at a T-intersection near the railway level crossing, located north of Bylong village. When passing through Bylong, Rylstone and Kandos, the MR208 becomes MR215.

The section between Golden Highway and Bylong has several points for access to the Wollemi National Park and Goulburn River National Park.

The Bylong Valley Way has several bridges along its route. Kirks Bridge, located in Baerami, facilitates the road to cross the Baerami Creek. The decayed and broken-down section of the bridge was demolished and replaced with new concrete sections. The replacement work was delayed due to 2007 Hunter region and Central Coast storms.

Muswellbrook Shire Council has plans to replace a major bridge at Widden Brook on the Bylong Valley Way. The bridge replacement is estimated to cost $1.8m.

The Carwell Creek Bridge between Kandos and Ilford is also set to be replaced. The Mid-Western Regional Council had invited tender for the construction of the bridge in November 2010. The scope of work includes replacement of the single lane concrete bridge with a new two lane pre-cast concrete bridge, and construction and removal of a temporary bypass track. Tenders for the supply of pre-cast bridge components were invited in December 2010.