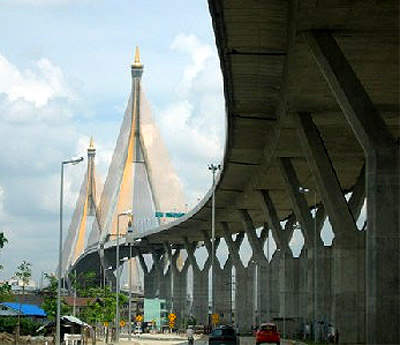 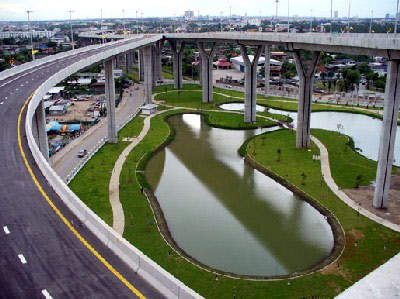 The areas beneath the Mega Bridge complex were landscaped. 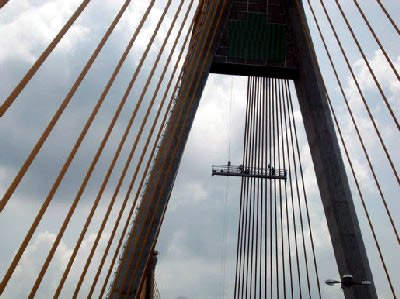 The A-frame cable stays of the Chao Phraya Mega Bridge being completed prior to opening. 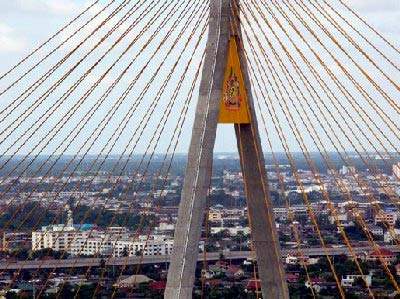 The view over Bangkok from the top of the of the Chao Phraya Mega Bridge.

The bridge for the Kanchanaphisek Outer Ring Road was designed by Parsons Brinckerhoff of New York, US. 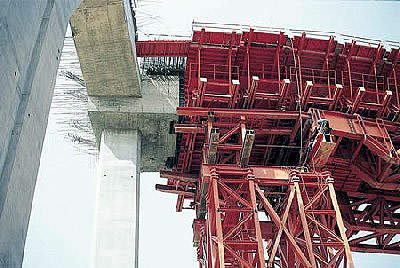 The Kanchanaphisek Outer Ring Road Bridge is the longest cable-stayed bridge in Thailand. It features two A-shaped towers located on the banks of the Chao Phraya River that combine traditional Thai design and contemporary architecture.

Bangkok’s Kanchanaphisek Outer Ring Road (southern section), particularly the Chao Phraya Bridge, has been a stop-and-start project since it was first conceived in 2001 and announced by Bangkok Governor Samak Sundaravej.

Opened in November 2007, the 20km (12 mile) section of motorway fulfils several functions by completing the connection around Bangkok, and providing a road link to the new Bangkok International Airport at Nong Ngu Hao, Suvannabhum, which opened in 2006.

The idea for the industrial ring road system was originally put forward by Thailand’s King Bhumibol Adulyadej in order to relieve the traffic congestion for the areas of Bangkok Port, Poochao Saming Phrai Road and Suksawat Road, which are the city’s main industrial areas.

To fulfil these expectations a futuristic bridge structure was conceived for the Chao Phraya Bridge associated with this road. The bridge has two steeple ‘A’ frame-like supports supporting a cable stayed structure in three sections.

“Construction of the Kanchanaphisek Outer Ring Road bridge began in 2004.”

The construction of the motorway section and the bridge started in 2004. The road project, including the bridge, was estimated to cost over THB9.2bn. The finance was provided by the Thai Government in collaboration with Chinese and Japanese investors.

The river crossing was planned as a dual tunnel system when the project was first conceived; however, engineering problems with the geology beneath the river bed and cost issues ruled this out at an early stage.

The bridge for the Kanchanaphisek Outer Ring Road was designed by Parsons Brinckerhoff of New York, US, who has had experience in Thailand and with bridges of this type. Parsons Brinckerhoff, the designers and architects, offered engineering, project management, construction supervision and technical support services for the duration of the project.

The general contractor for the road and bridge project was CH Karnchang Public Company of Thailand (with a winning bid of THB15.61bn). This company fulfilled the terms of the contract that the majority of labour and engineering expertise for this project should be from Thailand. Many insiders said that CH Karnchang won the contract because the government wanted to make a settlement on compensation payments it owes to CH Karnchang over another project at a price lower than the current THB6.255bn awarded in a court case.

The other three bidders for the bridge and expressway functioned as subcontractors. These included Italian Thai Development, Vljitphan Construction and Krungthon Engineering.

The bridge is the longest cable stayed bridge in Thailand. It features two A-shaped towers located on the banks of the Chao Phraya River that combine traditional Thai design and contemporary architecture. As seen from the roadway, the towers are a stylised representation of the traditional Thai greeting where the hands are steepled together in front of the body as the individual bows and utters a greeting. The towers are a symbolic gesture of welcome to visitors of Bangkok.

“To eliminate tie-down devices, the design uses counterweight concrete to balance the bridge.”

The superstructure consists of a pair of steel edge girders and floor beams spaced at 4m (13.1ft) intervals. Pre-cast concrete deck and cast-in-place strips are made composite to the steel frame. To eliminate tie-down devices completely, the design uses counterweight concrete to balance the bridge.

The Mega Bridge (part of the industrial ring road project) spans a meander loop in the Chao Phraya River; thus it has two major spans. In the middle there is a complex circular intersection, which means that a motorist may cross the first bridge span and then branch off to the northern roads by using the intersection.

The bridge was originally planned as far back as 1997; however it was held up for a major redesign (reducing the number of support pillars to two instead of one), and almost cancelled following the Thai economic crisis in 2001.

The bridge complex consists of two major spans, 702m long and 172m high, and 582m long and 162m high, respectively, on concrete pylons. There are 3,500m of approach bridges, 500m of high-level road and 9.1km of graded road. The bridges were completed in October 2006 and opened with a spectacular fireworks display.

The concept designer for the Mega Bridge was Yee Associates Architects and Designers. The project management for the engineering and construction were Norconsult International and the Thai companies MAA, Span and Team Consulting and Management International. A team of eight contractors worked on the project, including the industrial ring road and the Mega Bridge. These included Italian Thai, Sumitomo, CH Karnchang, Obayashi, Unique, Kajima, CMS Construction and Taisei Corporation.

The bridge and the immediate sections of highway cost in excess of THB8.7bn. This project was administered by the Public Works Department. The sections of the project were divided into three contracts, which were worked on by two different contractor groups.

The bridge is 51m high to allow clearance for ships to pass beneath it to the container port at Klong Toey. The structure is 4.2km long and has seven lanes to link Pu Chao Saming Prai Road with Rama 3 Road. The intersection in the middle has a 2.2km ramp to connect it with Sukaswat Road.

The bridge is supported by two large ‘A’-shaped cable supports similar to the style and type used in the construction of the Rama 3 Bridge, which was completed in 2003. The two pillars are supported by piles 70m deep and the structures are designed to take three times the maximum load. The foundations took a 30hr continuous pour of concrete. The bridge straddles the Wongwein Yai area and connects the Industrial Ring Road project.

The Mega Bridge project is the world’s largest movable scaffolding system ever commissioned. The movement of these huge steel structures safely and efficiently high overhead, as well as steering and positioning, required the heaviest (1.2t) Formwork Traveller in South East Asia and some of the most heavy-duty hydraulics ever produced.

Enerpac Hydraulics was chosen by the main contractor, Taisei, to design and supply the hydraulic systems, which were integrated in the movable scaffolding system.