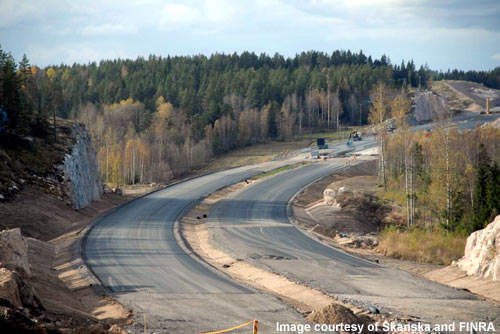 The E18 Muurla–Lohja project includes the construction of a new 51.3km section of motorway, seven motorway tunnels with a combined length of 5.2km, 75 bridges (longest 240m) and eight interchanges 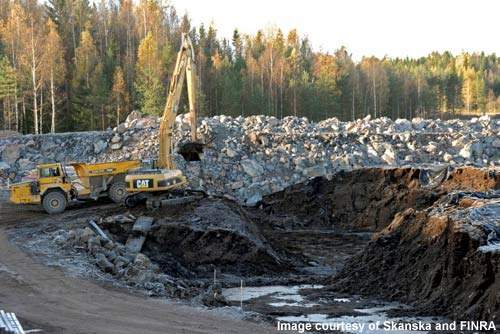 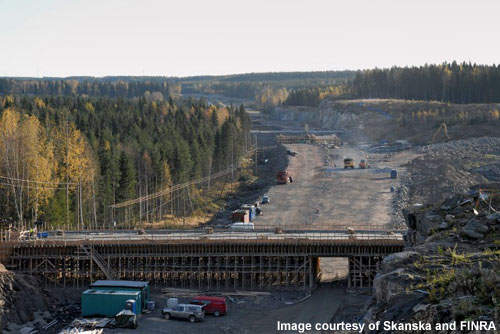 The E18 road will be operated under a 21-year concession. 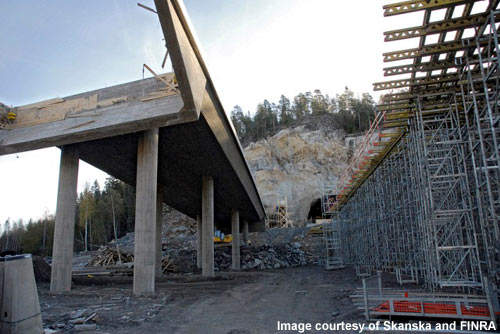 There are 75 bridges along the route of the E18.

The route of this section of the E18 is crucial to the integration of Finland with the rest of the European road network.

The new E18 Expressway in Finland is a section of a major arterial road (four-lane dual-expressway) being constructed between the cities of Murrla and Lohja. The new 51.3km road section will help to improve safety and support an increase in the volume of traffic.

The E18 is one of the key elements of the Nordic Triangle, which is the transport infrastructure system (road and rail) that links the Nordic capitals to each other and also Russia and central Europe.

The E18 project is an EU prioritised transport scheme. The goal for the project was to build the Turku-Helsinki-Hamina motorway in two phases by 2015.

The 28km section of Turku-Helsinki was completed in 2009 and the Helsinki-Hamina section is expected to be completed by 2015.

The Hamina-Vaalimaa section is also due to be gradually upgraded, to complete full motorway status for the road.

“The new 51.3km road section will help to improve safety and support an increase in the volume of traffic.”

The €299m finance for the public private partnership (PPP) project was finally put in place in October 2006. Private sector cash is being used to fund the project in addition to TEN funding from the EU. There will also be a portion of the project budget from European Investment Bank loans (€153m granted in October 2005).

The project is being carried out by a partnership (the partnership venture is called Tieyhtio Ykkostie) between Laing Roads (investing £8m in the project, a 41% interest), Skanska Infrastructure Development from Sweden (41%) and Lemminkäinen Corporation from Finland (18%). The arrangement involves a construction contract, which is valued at €164m, and a 21-year operations and maintenance contract (from when the motorway opened in 2010) worth €36m.

European Route E18 in Finland is a major route connecting the ports of Turku and Naantali. The road progresses via Helsinki metropolitan area and eventually ends at the Vaalimaa border crossing point (Russia).

The road follows the Finnish coastline in the south of the country from Turku to Vaalimaa via Helsinki.

The E18 Muurla–Lohja project includes the construction of a new 51.3km section of motorway, seven motorway tunnels with a combined length of 5.2km, 75 bridges (longest 240m) and eight interchanges. Engineering services subcontractors for the project include JP-Suoraplan Oy and JP-Transplan Oy (part of the Jaakko Pöyry Group) (contract is worth €4m).

In addition, a consulting joint venture formed by JP-Suoraplan, JP-Transplan, Ramboll Finland Oy and Sito Oy is also involved in the construction-phase engineering services for the road, bridges and tunnels, including geotechnical engineering.

In June 2007 construction of the Muurla–Lohja section of the E18 motorway had come to the surfacing stage. At the same time work was progressing on all of the 75 bridges along the route and six were already open to traffic.

“The Karnainen tunnel is the longest road tunnel in Finland.”

In November 2008, the section of Muurla-Lahnajärvi was opened. The section between Lahnajärvi to Lohja was opened in January 2009.

The Routiontie Road, which links the motorway to the town of Lohja, began construction in mid-2007 and has been completed. Road tunnels will account for around 10% of the total length of the motorway (just over 5km). The Karnainen tunnel is the longest road tunnel in Finland.

The tunnel excavation work came to an end in June 2007 when the last 50m of the south Karnainen tunnel was completed.

The telematics system of the motorway will be compatible with the traffic management system introduced in the Turku–Muurla section of the E18 in 2003.

Some of these have been opened and are structurally finished and operational but could still need surfacing.

“E18 is a major route connecting the ports of Turku and Naantali.”

The 240m Huitinjoki bridge is the longest bridge incorporated in the motorway to cross the River Huitinjoki at Kruusila, Kiikala.

The river is no more than a couple of metres wide but the bridge will actually cross the river valley at a height of 20m. This is so the landscape of the surrounding valley could be better preserved rather than cutting a vast road embankment.

The bridge deck in the Turku direction was cast in concrete by subcontractors from local company L ja Betoni Ky in November 2007. This required 955m³ of concrete and 200,000k of reinforcing steel.