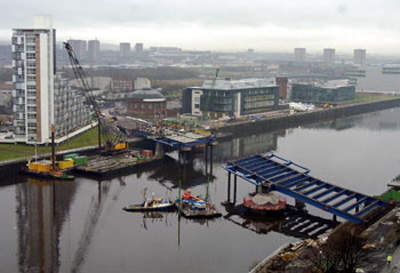 Early stages in the construction of Finnieston Bridge. 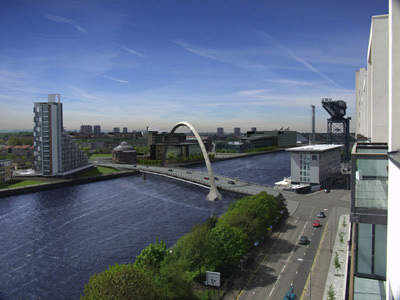 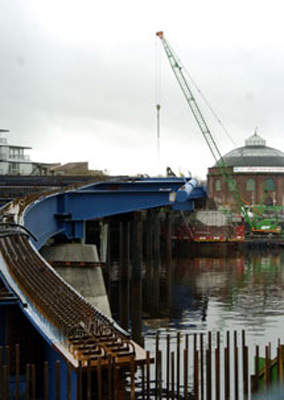 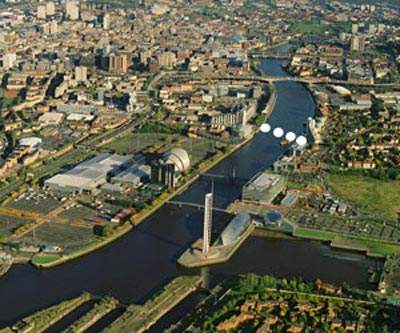 Aerial view of where the Finnieston Bridge will cross the River Clyde. 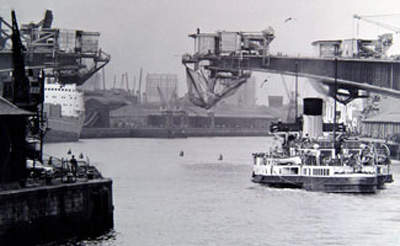 Construction of the main bridge span.

Finnieston Bridge (also called the ‘squinty bridge’ because of its diagonal situation and now officially known as the Clyde Arc) is a combined road traffic and pedestrian bridge. It opened in July 2006 after being structurally complete by April 2006, and crosses the River Clyde in Glasgow, Scotland, UK. The official opening of the bridge occurred on 18 September 2006.

The bridge links Finnieston Street on the north bank to Govan Road on the south bank. The new bridge provides improved access to Pacific Quay and to the regeneration areas on both banks of the Clyde. In addition, it is expected to attract 3,500 jobs to the area and stimulate the economy of Glasgow.

The bridge also provides better transport links for tourism and a new gateway to the city of Glasgow.

Glasgow City Council (investment of £3m) instigated the project in conjunction with Scottish Enterprise and the Scottish Executive.

Planning permission was granted in 2003 and construction of the bridge began in May 2005. The entire bridge project cost an estimated £20.3m.

The 800t bridge has a main span of 96m with two end spans of 36.5m (total 169m). The design of the main span features a steel bowstring asymmetric tied arch. The supports for the main span are located within the river with the abutments located behind the existing quay walls. The central navigation height at mean water height is 5.4m.

The bridge takes four lanes of traffic, two of which are dedicated to public transport (buses and taxis) and two for private and commercial traffic. There are also pedestrian and cycle paths.

For the future the bridge will also be able to accommodate a possible light rapid transit system (light railway scheme) or even a tram system.

The bridge was designed by Gillespies in conjunction with Halcrow and was constructed by Edmund Nuttall Ltd of Kilsyth, with the steel structure being provided by Watson Steel Structures. Piling works for the bridge were carried out from a large floating barge on the Clyde. The bridge superstructure was fabricated offsite. The bridge deck concrete slab units were cast at an onsite pre-casting yard.

The corrosion-resistant coating of the steel was completed by Merseyside Coatings in February 2006 using inspection equipment from Elcometer. The process involved blast cleaning the steel to ISO standard SA3, application of a thermal-sprayed 100 microns aluminium coating and finally a 300 micron four-coat epoxy system.

As to whether the bridge is a good thing or a bad thing, controversy rages. Many have argued against it because they think it will cause an obstruction to traffic in a working river such as the Clyde and cripple the river. Also many families living near the construction sites were unhappy about the pollution caused by the construction.

“Critics believe the bridge will cripple the Clyde, a working river.”

On the flip side of the coin many in local government have argued it will be a big boost for regeneration of certain areas of Glasgow. The BBC is one organisation that was in favour of the bridge being built to serve their new headquarters in Pacific Quay before they moved in, but the Clydefast Ltd seagoing ferry service between Broomielaw and Arran is one business which is severely hampered by the new bridge.

But this bridge is only the first part of a massive development project to regenerate Glasgow. There are two more bridges planned immediately – the £40m Neptune cycle and pedestrian bridge between Tradeston and Anderston and a further pedestrian bridge linking Springfield Quay with Lancefield Quay on the north bank.

In early January 2008 Carmichael Lighting Ltd used colour changing LEDs sourced from Dialight Lumidrives to light up the bridge arches. The lighting system is controlled by 40 Colourdriver 36 modules and has a power consumption of only 96W in total.

On 14 January 2008 one of the 14 bridge hanger supports of the Arc snapped and landed on the carriageway. The event occurred at night and thankfully no one was killed or injured. Robert Booth, the Glasgow City Council Land and Environmental Services executive director, commented: “One of the 14 bridge supports has failed but we don’t believe the integrity of the bridge is affected…Clyde Arc is designed to allow for the removal of one of the bridge supports at a time for repair and maintenance without affecting its operation.”

An examination by the engineers, Halcrow, on 24th January found that another of the hanger cables had a serious stress fracture. Following this a decision was made to close the bridge for six months and carry out remedial work on all of the hanger cables.

In March 2008 Halcrow installed five saddle frames to support the weight of the Arc during the works. The connector forks at the top and bottom of each hanger cable were then replaced. Reopening of the bridge is scheduled for 29 June 2008.