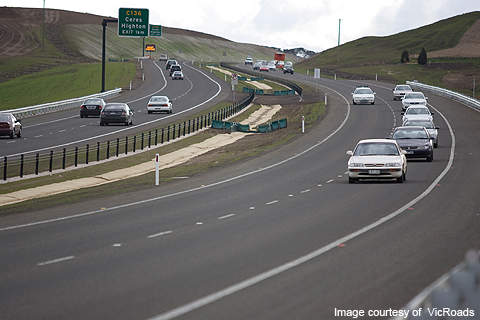 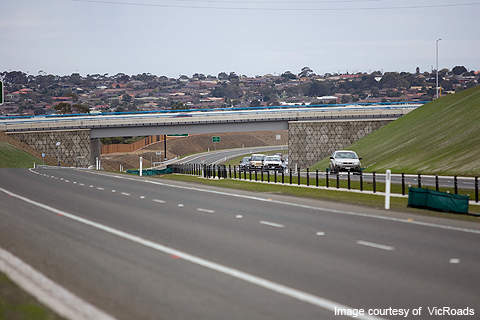 The Ring Road near Wandana Heights. 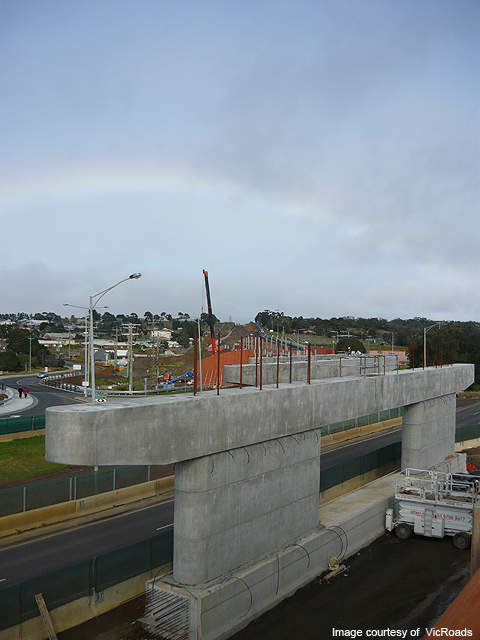 Construction of Section 4A at Princes HighwayAnglesea Road. 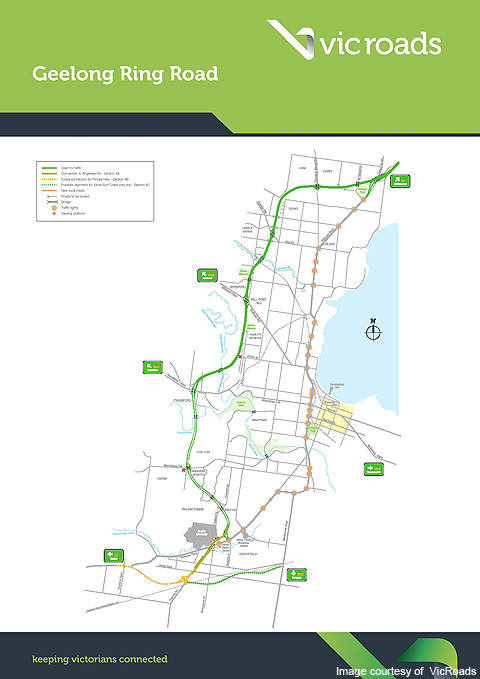 A route map showing the sections of the Geelong Ring Road.

The Geelong Ring Road is a freeway-standard road in Geelong, the second most populous city of Victoria in Australia. The ring road was earlier called Geelong Outer Freeway or Geelong Bypass. The 30km-long freeway provides a link between the city’s western suburbs, from the Princes Freeway in Corio to Anglesea Road in Waurn Ponds. The project was undertaken by the Victorian Government and VicRoads as a new addition to the Victoria’s freeway network. Construction of the project started in early 2006 and was completed in February 2013.

The Geelong Ring Road project significantly reduces the travel time between the coast and South Western Victoria from 25-60 minutes to less than 15 minutes and relieves traffic congestions. The ring road eliminates about 31 traffic lights through the Hamilton Highway to Waurn Ponds in Geelong and thus reduces greenhouse gas emissions. About 25,000 vehicles are using the ring road each day alleviating pressure on the internal road network.

The ring road also enables economic growth, population growth and land usage in the Geelong Region (G21). The City of Greater Geelong tourism studies estimated that the project will inject about $15-19m into the regional economy as it provides greater connectivity to Victoria’s tourist destinations.

“The $110m contract included construction of dual carriageways with a potential for expansion to six-lanes in future.”

The 10.5km Section 1 stretches from the Princes Freeway at Corio to an interchange at Bell Post Hill at the Midland Highway. The project section of the ring road includes three interchanges at the Midland Highway, Anakie Road and Bacchus Marsh Road. Two overpasses at Broderick and Creamery Roads and bridges over the Geelong to Ballarat rail line and Cowies Creek were also built. Construction of the section started in February 2006 and was completed in December 2008.

The 5.5km Section 2 stretches from the Bell Post Hill to the Hamilton Highway at Fyansford, providing a full diamond interchange with the highway. The project included construction of north-bound on ramp and south-bound off ramp and an underpass for access to the western side of the alignment. The on ramp and off ramp were, however, constructed as part of Section 3.

Another extension, Section 4, is further divided into three sub-sections – Sections 4A, 4B and 4C. Section 4A is an Anglesea Road connection, a 2.5km extension of the ring road through a 200m bridge over the Princes Highway into Anglesea Road. Construction of the Section 4A began in March 2009. It was originally scheduled for completion in April 2011 but delayed due to wet and cold weather. It was finally completed by December 2011.

“The Geelong Ring Road freeway provides a direct and safe route to the south western Victoria including the Great Ocean Road and the Surf Coast.”

After receiving planning approval, major construction work on Section 4B began in September 2010. It was completed in February 2013 at an investment of $110m. A $76.9m funding was announced for Section 4C by the Victorian Government in 2010.

A planning scheme for the route was gazetted in October 2010 and in May 2011 an Advisory Committee was appointed by the Minister for Planning to conduct a review of the previously sanctioned alignment of Section 4C. The construction of Section 4C is expected to be completed in 2016.

The Geelong Ring Road freeway provides a direct and safe route to the south western Victoria including the Great Ocean Road and the Surf Coast.

The design and construction contract for Section 1 was awarded to AbiGroup Contractors. The value of the contract was $138m. Construction was started in 2005 and completed in 2008. The project included construction of dual carriageways and a shared user path.

In July 2007, the Section 3 construction was contracted again to Abigroup Contractors. The $110m contract included construction of dual carriageways with a potential for expansion to six-lanes in future and about 2.5 million m3 of bulk earthworks. Construction was started in September 2007 and was completed six months ahead of schedule in June 2009. Architectural weathering steel noise walls with coloured acrylic panels were built at specific locations along the ring road.

In December 2008, a $125m contract for design and construction of Section 4A was awarded to Fulton Hogan. The $110m Section 4B contract was undertaken by Cut and Fill.

The bridges were constructed with aluminum beam joints supplied by Granor Rubber and Engineering.They were installed across the road surface by Niche Industries.The expansion joints of the bridge deck accommodate the thermally induced expansion and contraction. PPI Corporation was the contractor for drainage systems and passive filtration technology.