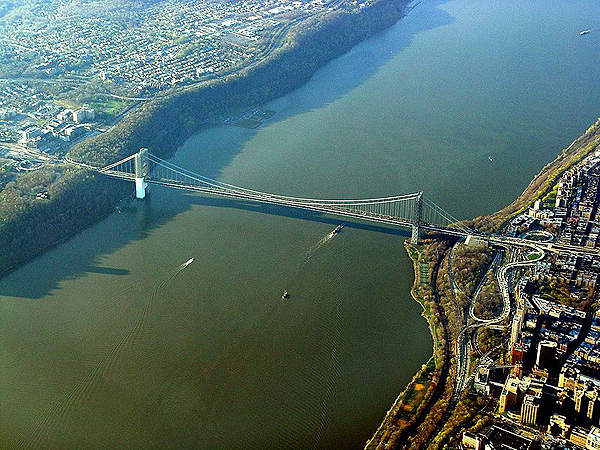 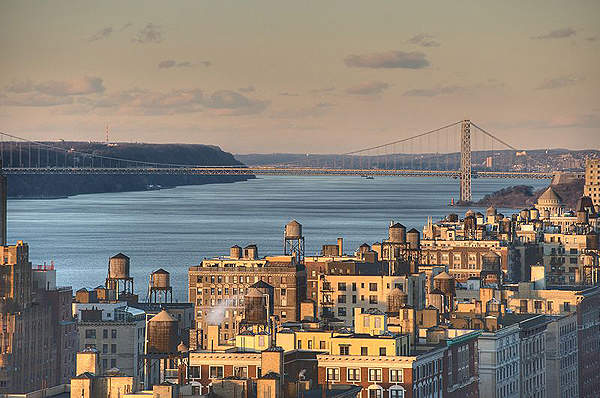 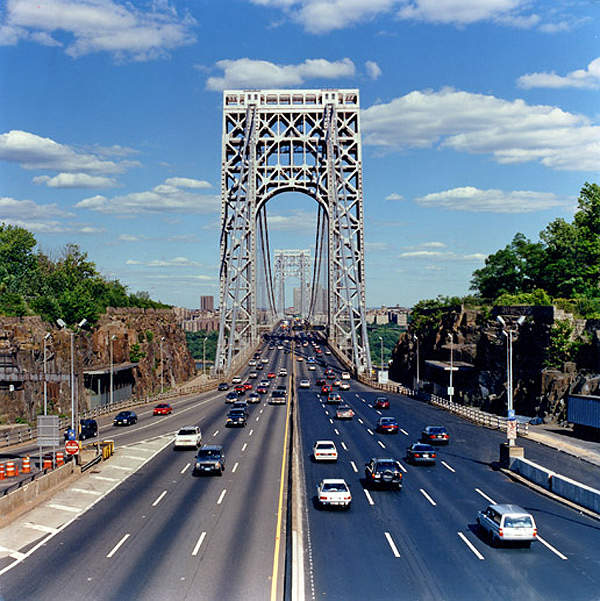 The George Washington Bridge has 14 lanes together on the upper and the lower decks. Image courtesy of Dave Frieder. 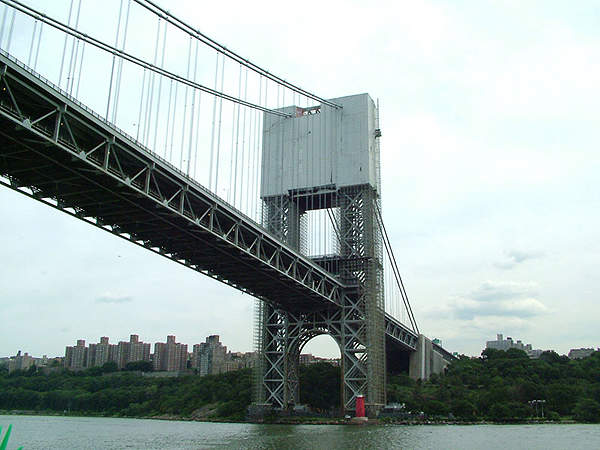 Each tower of the GW Bridge is composed of 1,250ft sections.

The LED lighting on the George Washington Bridge saves $49,000 in annual energy and maintenance costs. Image courtesy of Sorens.

Interstate-95, US Route 1 and US Route 9 pass over the bridge. US Route 46 terminates at the middle of the bridge at the state border. The bridge is operated by The Port Authority of New York & New Jersey.

Carrying more than 300,000 vehicles a day and 100 million annually, the double-decked GW Bridge is one of the busiest motor vehicle bridges in the world. There are 14 lanes together on the upper and the lower decks. Pedestrian and cyclist lanes are accommodated on the upper deck. The speed limit on the bridge is 70km/h.

GW Bridge was opened to traffic in October 1931 and completed of service 80 years in 2011. A major rehabilitation programme was announced for the bridge in February 2012. The programme has been estimated to cost more than $460m and create 2,000 jobs.

History and original cost of the Hudson River Bridge

“The Port Authority of New York & New Jersey announced a $1bn project in December 2011, to replace the steel suspenders ropes.”

Design of the bridge was proposed by Swiss-born engineer Othmar Ammann in 1923. Construction began in 1927 and the bridge was completed ahead of schedule at a cost of $59m.

The bridge was originally named the Hudson River Bridge but subsequently was renamed as the George Washington Memorial Bridge, which was later shortened to the present name.

The original bridge was opened with six lanes on a single deck. The lanes were extended to eight in 1946. The lower deck and new approach roads were constructed during 1959-62.

The lower deck was built at a cost of $20m while the new approach roads – Trans-Manhattan Expressway and Alexander Hamilton Bridge from New York and Bergen-Passaic Expressway from New Jersey – cost $60m.

The centre span of the bridge is 3,500ft (1,100m) and is supported by two steel towers of 570ft. The bridge has four main cables; each cable has been made out of a single strand. Each strand is composed of 434 wire-wraps around a strand shoe.

The main cables are held by four saddles on each tower. The cables are anchored into the New York anchorage and into the rock of the Palisades on the New Jersey side. The roadway is supported on steel suspenders.

Construction phases of the GW Bridge on the East Coast

Construction of the bridge began with the building of the two towers. The New Jersey tower is built in the water while the New York tower is on land. Each tower is composed of 1,250ft sections.

The main cables were then strung and steel suspenders hung. The roadway was built during the final stage of construction.

The rehabilitation programme announced in February 2012 will be undertaken in three projects.

“Carrying more than 300,000 vehicles a day and 100 million annually, the double-decked GW Bridge is one of the busiest motor vehicle bridges in the world.”

The projects include the rehabilitation of the 178th and 179th Street and bus ramps, the Center Avenue and Lemoine Avenue bridges, plus steel repairs and repainting on the lower deck. Works will begin in 2013.

The Port Authority of New York & New Jersey announced a $1bn project in December 2011, to replace the steel suspenders ropes. The project includes replacement of the 588 ropes, plus rehabilitation of the main cables and the 488 strands in the anchorages.

The Port Authority has approved $15.5m for the project which is scheduled to begin in 2013. The work is expected to take in excess of eight years to complete and create 3,600 jobs.

The rehabilitation of the upper deck began in December 2010 and was underway as of the first quarter of 2012.

Lighting on the GW Bridge connecting Manhattan and Bergen County

The mercury vapour fixtures on the bridge were replaced by LED lighting in 2008. The 156 LED fixtures have a life expectancy of 12 years.

The LED lighting saves $49,000 in annual energy and maintenance costs. Carbon emissions were reduced by 260,000lb a year. There are 28 toll lanes on the bridge and three toll plazas.

The bus station located in the upper Manhattan connects directly to the upper deck and carries more than four million passengers annually. The station was opened in 1963. It is undergoing a major overhaul to include 21 new gates and a passenger waiting area.

The project is being undertaken by the George Washington Bridge Development Venture, under a public-private joint venture with the Port Authority. The work is scheduled to be completed by the end of 2013.