Across the Hangzhou Bay on the East China Sea, crossing the Qiantang River at the Yangtze River Delta. Starting in Jiaxing to the north, the bridge ends at Ningbo in the south.

Republic of China and Songcheng Group and other private organisations 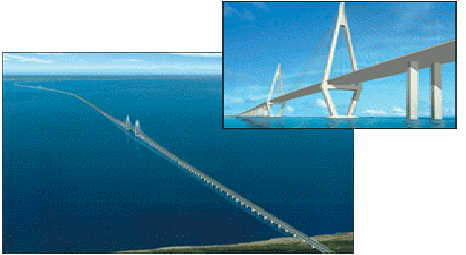 The 36km-long Hangzhou Bay Bridge is a six-lane highway bridge and the longest ocean-crossing bridge in the world. 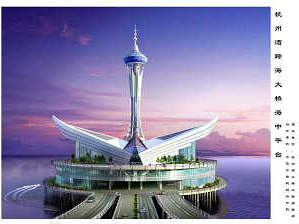 The service island at the middle of the Hangzhou Bay Bridge serves as a sightseeing location for drivers and can also support rescue services.

The S-shaped Hangzhou Bay Bridge will shorten the ground transportation distance from Ningbo to Shanghai by 120km and travel time from four hours to two hours.

A temporary 10km trestle has been erected for pile driving and pier construction. Each previously erected span will serve as the deck for transportation and erection of the next girders as the launching gantry moves forward.

Giant floating cranes with accurate anchoring devices are used for shipping and erecting the girders. 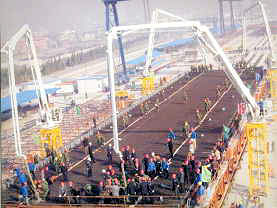 Construction work on the Hangzhou Bay Bridge began in June 2003 and completion is scheduled for 2008. 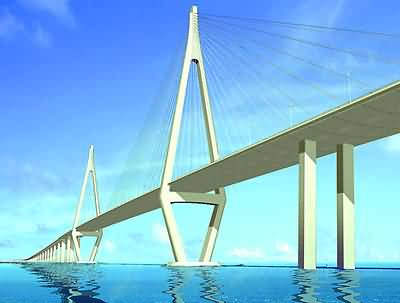 An artist's impression of the finished cable-stayed bridge. 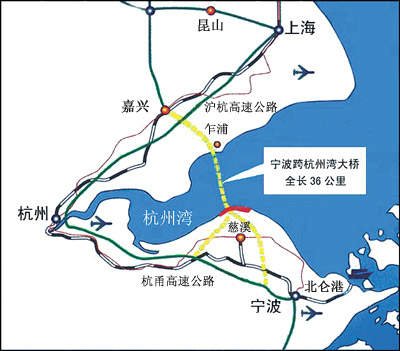 A map of the route of the bridge across the delta.

The S-shaped Hangzhou Bay Bridge is an important connection in China’s East Coast Superhighway. Starting in Jiaxing to the north, the bridge ends at Ningbo’s Cixi county in the south.

It shortens the ground transportation distance from Ningbo to Shanghai by 120km and travel time from four hours to two and half hours. It is a six-lane, two-direction highway with a 100km/h speed limit, and a 100-year, service guaranteed, cable-stayed design.

The Hangzhou Bay Bridge was the main component of a 5.2km national highway between the provinces of Heilongjiang in the north and the Hainan in the south.
Wang Yong, chief director of the Hangzhou Bay Trans-Oceanic Bridge Construction Command Post, said the bridge would be one of the most important, not only in China but in the world “for it is not only the longest one (over a sea) but also will be built in the world’s most complicated sea environment, with one of the three biggest tides on Earth, the effect of typhoons and the difficult content of the sea soil”.

Preparatory work started on the bridge as far back as 1994. Construction work began in June 2003 and was completed in June 2007 and an opening ceremony was held on 26 June. Several tests and evaluations were conducted for about one year before official opening. The bridge was opened to the public in May 2008 and carried about 50,000 vehicles per day in its first year of operation.

“Construction of the sea-crossing bridge is an indication of China’s increasing economic power, and it is expected to boost economic development in the Yangtze River Delta.”

Of the total project cost of CNY11.8bn ($1.42bn), approximately CNY149m ($18m) was contributed by 17 non-governmental enterprises in the province. Around 35% of this amount was raised from private companies in Ningbo; 59% was provided as loans from China’s central and regional banks. The Songcheng Group is the biggest non-governmental shareholder in the project with its investment accounting for 17.3% of the basic capital. Construction of the sea-crossing bridge is an indication of China’s increasing economic power, and it is expected to boost economic development in the Yangtze River Delta, also called the Golden Industrial Triangle. The officials expect to recover the capital costs of the project in 15 years.

Lv Zushan, Governor of Zhejiang, China’s fourth-largest provincial economy said: “The bridge will help form a more convenient and efficient traffic network in the Yangtze River Delta, enabling each part to develop much closer relations with one another… We believe the bridge will open many more opportunities for the region’s overall development and greatly enhance its economic strength and competitive power.”

China Railway Bridge Bureau Group Co. Ltd. was the main contractor for the project. The contract for consulting and engineering services was awarded to Hardesty & Hanover, LLP. ICE participated in the project by the use of three ICE V360 tandem vibratory pile drivers to produce the foundations for the bridge in the middle of Hangzhou Bay. Ty Lin International was the designer of the bridge. Ben C Gerwick provided ship impact protection systems for the bridge.

The Hangzhou Bay is a gulf in the East China Sea where one of China’s natural wonders, the Qiantang River Tide, creates fast water and large waves. The area is also a typhoon prone zone. These factors made construction feasibility a major concern for the project and the plan was only finalised after nine years of consultation and over 120 technical studies with the help of more than 700 experts from throughout the world.

The cable-stayed bridge design was selected for the project as it can withstand the adverse conditions, multi-directional currents, high waves, and geologic conditions at the site. The bridge structure has also been designed to seismic criteria and will retain integrity in earthquake conditions up to seven on the Richter scale.

The 36km length has highway-class road with six, 3.75m lanes, three in each direction. The overall width of the bridge is 33m. The roadway grade at cross-slope is 2% and a maximum 4% at longitudinal slope.

Designed for 100 years of service life, the bridge has speed limits of 100km/h for the main spans and 120km/h for land approaches. The bridge has a height of 62m, enabling fourth and fifth generation container ships to pass through in all conditions. The total length of cable used in the project is 32.2km.

One major challenge faced by the project was the eruption of natural gas in a shallow layer along the bridge line. A special study was conducted and exploration was performed to investigate the distribution of the gas and the property of the soil during and after releasing the gas. The gas was released before pile driving to avoid any disturbance to the soil, collapsing of ground or eruption and flaming of gas.

Mostly, construction activity was performed on land and then the prefabricated components were transported to the site for erection and final installation. For shipping and erecting the girders in sea, giant floating cranes with accurate anchoring devices and launching gantries were used.
Construction on mudflats near the south shore, in an alternating wet and dry tidal area, presented serious technical problems. A temporary 10km trestle was erected for pile driving and pier construction. Girders weighing 1,430t were erected from the top, starting from the land end and launching towards the sea. Each previously erected span served as the deck for transportation and erection of the next girders as the launching gantry moved forward.

Also, severe marine conditions caused difficulties in anchoring barges and construction vessels. Under turbulent tidal flow and typhoon influences, water flow currents were in the range of 2m/s to 3.32m/s at the Hangzhou Bay Bridge sites. The floating cranes could safely transport the 2,000t girder from the shore to the site and then anchor stably to erect and install the precast concrete box girder.

The Hangzhou Bay Bridge consists of nine sections. The first is the bank lead road to the north approach.

The middle bridge approach is laid on low piers with 70m, post-tension, concrete box-girder spans with a total length of 9,380m.

The south navigable bridge is a cable-stayed bridge with an A-shaped single tower, double-cable and steel box-girders. The main span is 318m, and the total length including side spans is 578m.

The eighth section measures to a total of 19,373m, and is composed of three sections:

The ninth section is Bank Lead Road at the south approach.

Trimble provided Global Positioning Systems for the monitoring of the construction. The project required precise positioning for the bridge span off the coast. By using the Trimble 5700 RTK GPS systems with a reference station for differential corrections, accuracy was improved at longer distances enhancing the productivity.

A total of 50 5700 RTK GPS systems were set up where the bridge crosses the Bay of Hangzhou and additional systems were located on barges in order to provide millimetre accuracy for the real-time positioning of piles and pre-fabricated sections of the bridge.