The 5.7 mile segment will complete the Outer Loop around Charlotte. Image courtesy of NCDOT communications. 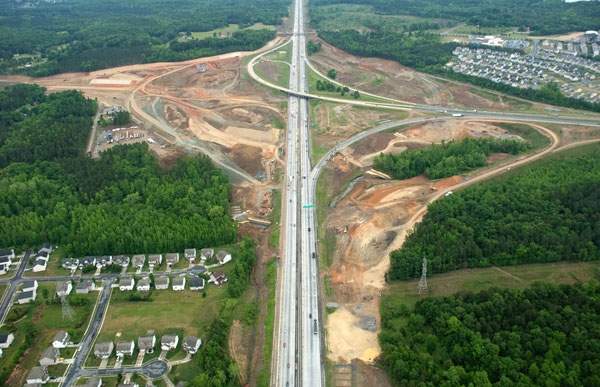 The I-485 Outer Loop is expected to be completed by the end of 2014. Image courtesy of NCDOT communications.

The existing trumpet-shaped I-85/I-485 Interchange in north-east Charlotte is being replaced with a turbine interchange design. Image courtesy of NCDOT communications. 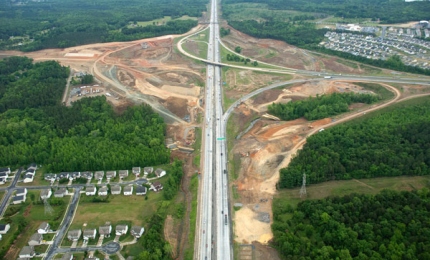 Located in Charlotte, the largest city in North Carolina, US, the $356.9m Charlotte Outer Loop project consists of the construction and improvements on three separate interstates around the city.

The improvements comprise the completion of Interstate-485 (I-485) around Charlotte, the construction of the I-85/I-485 Interchange and the widening of approximately seven miles (11.2km) of Interstate-85 (I-85).

"The construction works for all the three projects started in 2011 and completion is expected by the end of 2014."

North Carolina Department of Transportation (NCDOT) is implementing these projects using a design-build process and has taken a fast-track approach to coordinate the construction of these projects to minimise costs and speeding up the works.

The construction works for all the three projects started in 2011 and completion is expected by the end of 2014. The project aims to improve the safety and efficiency of local and regional traffic around Charlotte.

Details of the I-485 Charlotte Outer Loop project

A new eight-lane section of the I-485 is being built with an estimated investment of $139.5m and will run 5.7 miles from the west of North Carolina Highway 115 (NC 115) to the west of I-85 in northern Charlotte. This new section will also link I-77 to I-85. As part of the project, the existing Alexanderana Road from NC 115 will be extended to connect with Eastfield Road.

The I-485 Charlotte Outer Loop project includes the construction of a split-diamond interchange with six roundabouts at Prosperity Church Road, a diverging diamond interchange at Mallard Creek Road and a new bridge to carry Browne Road over I-485, in addition to the realignment of several local roads, including the Johnston-Oehler Road, Ridge Road and Odell School Road.

The existing trumpet-shaped I-85/I-485 Interchange in north-east Charlotte is being replaced with a turbine interchange design, which will direct left-turning traffic around a central bridge in a circular fashion, while providing a seamless movement between the two highways.

At an estimated cost of $92.2m, the innovative interchange modification project will help to complete the Charlotte Outer Loop at a lower cost.

The I-85 widening project is estimated to have cost $125.2m and will widen seven miles of highway from the south of Bruton Smith Boulevard/Concord Mills Boulevard to the north of NC 73 in Cabarrus County, by adding four extra lanes to the existing four-lane stretch.

The Johnson County Gateway interchange project being developed by the Kansas Department of Transportation (KDoT).

With four lanes in each direction, this section of the I-85 will accommodate additional traffic upon the completion of I-485 Charlotte Outer Loop.

Construction started in 2011 and the project is scheduled for completion in September 2014. However, the southbound lanes on the I-85 from Bruton Smith Boulevard to the future I-85/I-485 turbine interchange will not be open to traffic until the final section of the I-485 is complete.

Blythe Construction, a subsidiary of Eurovia (VINCI Group), was awarded the design-build contract for the final section of the I-485 Outer Belt around Charlotte in June 2010. CDM Smith (formerly Wilbur Smith Associates) is also engaged as a private partner in the project.