12km of three- to four-lane expressway

The route of the new 12km Kallang / Paya Lebar expressway. 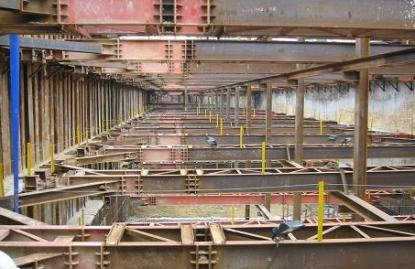 Construction work on one of the expressway's cut-and-cover tunnels. 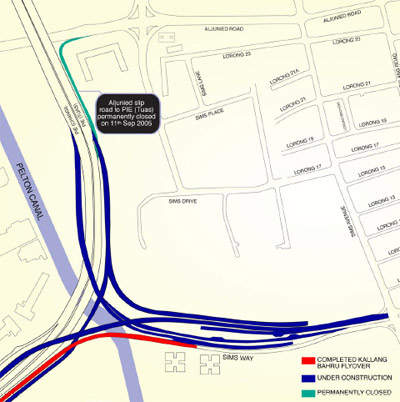 The effect of the new flyover on the operation of the surrounding road infrastructure. 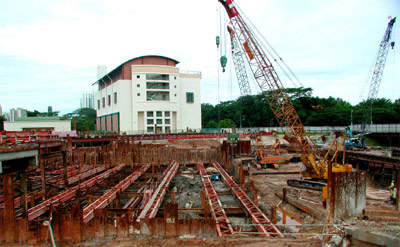 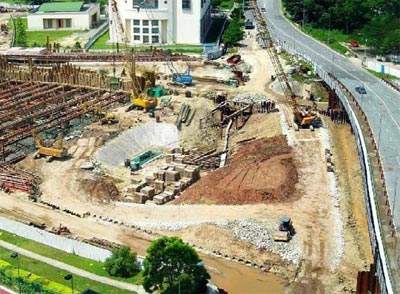 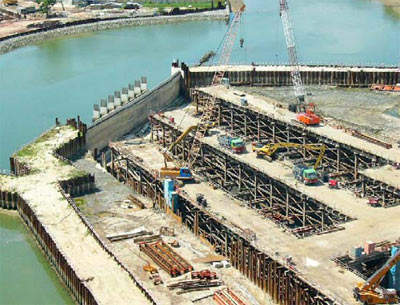 Strutting work along the Jaylong River. 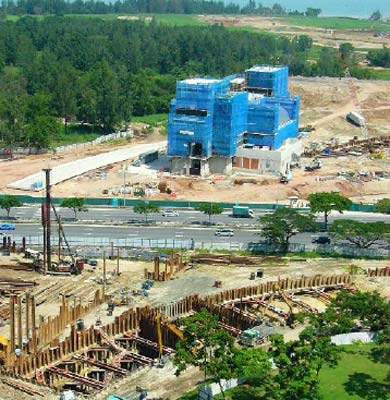 One of the six ventilation buildings supplying fresh air to the tunnels.

The new 12km Kallang / Paya Lebar Expressway (KPE) runs from the East Coast Parkway (ECP) in the south to the Tampines Expressway (TPE) in the North East.

The new urban expressway was constructed at an estimated cost of S$1.8bn (US$1bn). It includes 8.5km (5.28 miles) of tunnels, which make it the longest underground expressway in South East Asia. The KPE is a dual-carriageway expressway with three lanes in each direction and eight interchanges.

In conjunction with the North East Line, the KPE caters to the growing population in the North East corridor and provides alternative routes between the city and the estates in the north of the island. It is expected to lighten the load on the Central Expressway (CTE), which is the only expressway now serving the area.

Travel time from the North East to the city is expected to be cut by up to 25%.

Construction work started in 2001 and the road opened in September 2008. The northern and southern sections of the expressway opened on 23 June 2007 and 26 October 2007 respectively.

The agency responsible for the construction is the Land Transport Authority (LTA) of Singapore. In July 2007, the LTA announced an extension of the new KPE from East Coast Parkway to the Ayer Rajah Expressway going through Marina South. The road is called the Marina Coastal Expressway (MCE) and started construction in April 2009 with a scheduled completion at the end of 2013. This road will involve a further tunnel of 3.5km of which a 400m section will be 20m under the sea bed.

The agency responsible for the construction is the Land Transport Authority (LTA) of Singapore. In July 2007 the LTA announced an extension of the new KPE from East Coast Parkway to the Ayer Rajah Expressway going through Marina South. The road will be called the Marina Coastal Expressway and will start construction in 2008 with a scheduled completion at the end of 2013. This road will involve a further tunnel of 3.5km of which a 400m section will be 20m under the sea bed.

Starting at the ECP, the Kallang section of the expressway crosses beneath the Geylang River, the National Stadium area, Nicoll Highway, Mountbatten Road, Geylang Road, Sims Avenue and the Pan Island Expressway (PIE).

The Paya Lebar section of the expressway continues below the Pelton Canal for almost 2km. It then crosses under Paya Lebar Road and at the same time over the new Circle Line, to reach Airport Road.

The tunnels run for nearly 3.5km below Airport Road and Paya Lebar Air Base before emerging at ground level at Defu Lane 3. The expressway then continues at grade for 3km, crossing over Tampines Road on the Kallang Bahru Flyover to meet up with the expressway at Lorong Halus.

The new flyover was opened to traffic on 11 September 2005. It provides convenient access for motorists to get on the PIE (Tuas) via Sims Way. The new flyover means that the entire stretch of Sims Way, from the junction of Guillemard Road, Mountbatten Road and Nicoll Highway to the PIE (Tuas), is now also open to traffic. The new road system includes eight interchanges, 11 entry slip roads and 12 exit slip roads.

The main contract for the design, construction and project management of the expressway worth S$929.9m was awarded to Samsung Engineering and Construction. The construction work for each section of the project was then awarded to subcontractors.

“The KPE caters to the growing population in the North East corridor.”

Some of the engineering methods used for the construction of the road are related to the terrain it has to traverse. There are tunnel sections under rivers and also flyover sections, each of these creates its own engineering problems.

Chevalier Singapore Holdings Limited was responsible for the design, fabrication and installation of the lift and hoist system for the six ventilation buildings.

Lam Hong Leong Aluminium Pte Ltd installed cladding for the expressway. Sembcorp Engineers and Constructors designed and constructed a 1.5km road tunnel section from ECP to Nicoll Highway, including the construction of the KPE/ECP interchange, the at-grade roads and a ventilation building (Contract 421).

“Travel time from the North East to the city is expected to be cut by up to 25%.”

Chan & Chan Construction Pte Ltd constructed a 1km stretch of the KPE from Defu Lane 3 to Fish Farm Road. The contract included the construction of a dual three-lane flyover across Tampines Road and vehicular bridge over a canal, as well as the widening of part of the Tampines Road.

Chye Joo Construction Pte Ltd has constructed a 2km stretch of the KPE connecting Lorong Halus Interchange at TPE to the proposed interchange at Tampines Road. The contract involved the construction of a dual three- to four-lane expressway.

In the Geylang River section the tunnel was completed in January 2007. Once work was completed, the river was diverted back onto its original alignment and the river walls reconstructed and back filled.

Stadium Walk / Stadium Crescent was reinstated on 15 February 2006. Reinstatement works at the Stadium Boulevard / Stadium Drive junction were completed in June 2006. The temporary Stadium Drive was realigned to its final location in June 2006 following the backfilling of the KPE and Circle Line (CCL) tunnels below the road junction.

Another completed section is the KPE tunnel below the ventilation building A. The remaining work is being done by the National Parks Board.

Just north of the ECP, the construction of slip road A tunnel structure connecting the northbound KPE tunnel from the city along ECP was completed in 2005.

“There are tunnel sections under rivers and flyover sections, each creating its own engineering problems.”

Construction of slip road B tunnel, the exit slip road from KPE southbound tunnel joining ECP (heading towards Changi) is continuing and sheet-piling works was completed in late 2006.

Excavation works and structural works are progressing but rely on the necessary soil-improvement work. Jet grout piles are being installed in the pump sump and shallow end of the slip road due to presence of soft ground below the tunnel structure alignment.

Construction of the main tunnel connecting the two tunnel sections at ECP and Tanjong Rhu was completed in early 2007.

Contract 423 was one of the most challenging sections of the whole project. This section was almost entirely underground and included a total cut-and-cover tunnel length of 2.96km, two ventilation buildings, five slip roads, two road bridges and an interchange.

The tunnel, which is 36m wide, is located directly below a 27m-wide storm water canal for most of its length and the flow carrying capacity of this has to be maintained at all times during the construction of the tunnels. To add to the complication of the design and construction, the route is adjacent to commercial and residential buildings up to 25 storeys high. Some of these buildings are located only 3m from the completed tunnel structure.

The alignment between the Pan-Island Expressway to Aljunied Road, excavation and strut installation works were completed by June 2007. The associated tunnel construction work was also completed in the middle of 2007, after which the reinstatement of the Pelton Canal and Aljunied Road Bridge was carried out.

The KPE southbound tunnel structures, in front of Blk 122 Paya Lebar Way, were completed in March 2006. The tunnels in the Mattar Road area (from Blk 79/79A to just after the Community Centre) were completed along with construction of the new Pelton Canal in early 2007.

“The Kallang / Paya Lebar Expressway provides better alternative routes between the city and the estates in the north of the island.”

About 130,000m² of Preprufe 160R and 300R and 380,000m² of Bituthene 3000 membranes were applied to the tunnel base, wall and roof slabs. Preprufe was selected for its unique positive bonding system, where it bonds to wet concrete poured against it. It can be laid on damp surface substrates as it does not bond to lean concrete.

As soon as it is laid, reinforcement bars are placed on it almost immediately, requiring no protection screed. This helps to speed up installation and the construction cycle.

Furthermore, Preprufe can be installed effectively in confined areas, for example, around sheet piles, and yet provide a positive waterproofing system.

The LTA was concerned that the opening of the KPE would see a flurry of accidents from drivers not used to driving in tunnels. Consequently they engaged Bartle Bogle and Hegarty of the UK to run a public education campaign about the proper way to use the road (a S$2.81m contract that was also shared with the UK company Grayling). Starting in 2007, the campaign suggested not overtaking and that drivers pay attention to road signs.

The LTA also introduced speed cameras in the tunnels to enforce a 70km/h speed limit, which now catch over 500 motorists per day (3,400 in the first six days). A tender was called to develop congestion management in the KPE tunnels and the LTA introduced traffic marshals on motorcycles (initially six deployed by Certis CISCO) to be available at all incidents in the tunnels.