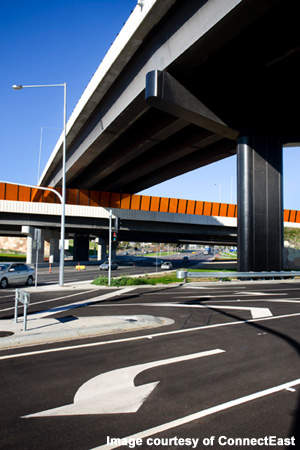 ConnectEast will run the road over a concession period of 39 years. 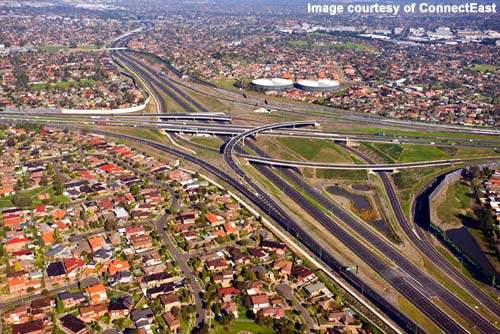 One of the 17 interchanges involved in the project. 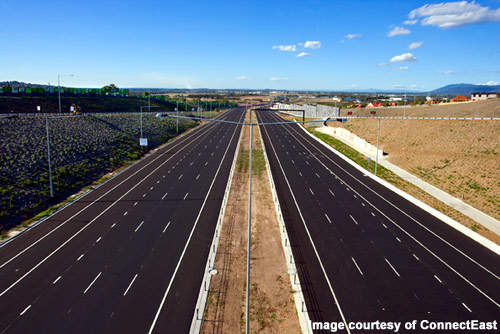 The road project has involved 103 structures. 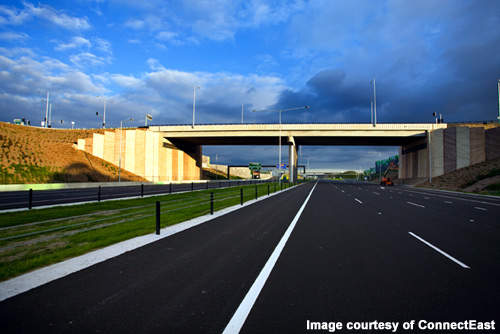 There are 39km of road which bypass 45 sets of traffic lights. 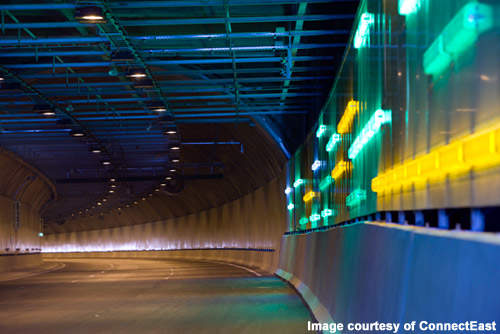 The twin tunnels have allowed a nature reserve to be preserved.

The 39km-long EastLink is Australia’s largest road project to date. The A$2.5bn scheme opened five months ahead of schedule on 29 June 2008. The freeway runs north-south with three lanes in either direction connecting the Eastern Freeway in the east of Melbourne at Donvale with the Frankston Freeway in the south at Seaford (running between eastern and south-eastern suburbs).

The project, which forms part of the Metropolitan Ring Road Project, will mean safer driving and massive fuel savings for thousands of commuters in Victoria (EastLink bypasses at least 45 traffic lights). The road is being tolled using an electronic tag system called Breeze which is interchangeable with the Transurban e-TAG system used on the CityLink Freeway. As a gesture of goodwill the first month’s operation of the road from opening to 27 July 2008 was toll
free.

The construction of the main EastLink project began in March 2005. The project has been carried out under a public private partnership agreement and will be owned, operated and maintained by ConnectEast for a period of 39 years with the concession expiring in 2043. The road was constructed by the joint-venture of Thiess and John Holland and the mechanical and electrical work was contracted to United Group Infrastructure.

The design elements of the project such as embankments
and noise walls were developed by WoodMarsh Architecture, and Tract Consultants. CW-DC, a subsidiary of Connell Wagner, was selected as the civil designer for the northern 6km section of the project, which included the two tunnels and the Ringwood bypass interchange, which included eight separate bridges for the three-level grade separated freeway to freeway free-flowing connections in only a 0.3km² area. GVP Fabricators Pty Ltd and Smorgon Steel were contracted to supply and fit the trough girders for the project.

The EastLink contract was awarded to ConnectEast by the government regulator Southern and Eastern Integrated Transport Authority (SEITA), which was established to manage and oversee the project on behalf of the government. The Breeze electronic tagging system was provided by Spanish company SICE with equipment, including Breeze Tags, provided by Kapsch TrafficCom AB of Sweden, under the PREMID brand of dedicated short-range communications products.

The EastLink route starts at the eastern end of the Eastern Freeway at Springvale Road in Nunawading. The route then tunnels eastward towards Ringwood under the Mullum-Mullum Creek area through twin 1.6km tunnels (the twin tunnels are named Melba and Mullum Mullum, in the inbound and outbound direction).

“The EastLink route starts at the eastern end of the Eastern Freeway at Springvale Road in Nunawading.”

It then proceeds 40km south towards Frankston, passing through Wantirna, Wantirna South, Scoresby, Rowville, Mulgrave, Dandenong North, Noble Park, Keysborough, Dandenong South, Bangholme and Carrum Downs, before finally coming to an end at the northern end of the Frankston Freeway.

In addition, a 4.8km section of the Dingley Freeway known as the Dandenong Bypass (also called Dandenong Southern Bypass) was also constructed by ConnectEast and Thiess John Holland as part of the EastLink project and was opened on 9 December 2007.

The road project involved 103 structures, including 88 bridges, 17 interchanges and has a three metre-wide pedestrian/cycle path. Of the 39km length of the motorway, about 25km has noise walls ranging in height from three to 11m and constructed from concrete or acrylic panels. The road is administered from the company headquarters in Ringwood.

It has been suggested that the EastLink will only cause more congestion in the region of the Frankston Freeway. An argument is now being made for a Frankston Bypass to complete the last link in the Mornington Peninsula Freeway.