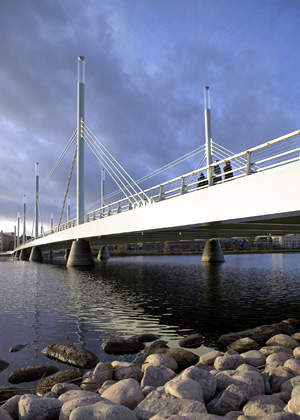 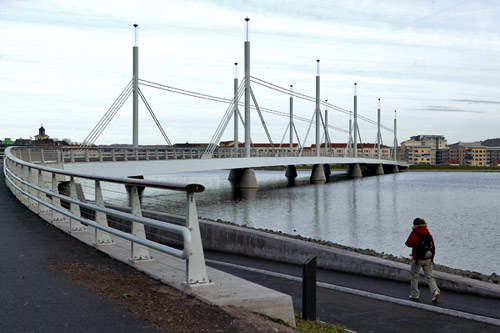 The bridge was built to relieve traffic congestion in the town of J&#246;nk&#246;ping. 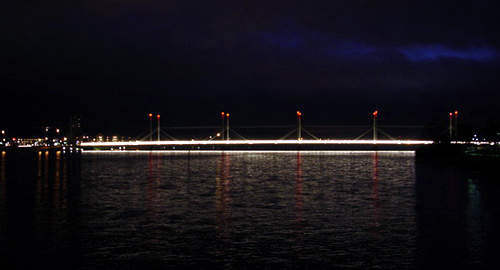 The Munksj&#246; Bridge at night showing the Hecker lighting on top of the masts.

The Munksjö Bridge was constructed in the Swedish town of Jönköping, situated just south of the large Lake Vättern, as part of a land reclamation project. Jönköping is a town which is largely divided by Lake Munksjö and as such already has three bridges to connect the two halves of the town.

It was decided that a fourth bridge fording the lake would help the town’s prosperity and make communications and traffic congestion easier by completing the ring road
with the other three bridges.

Consequently, in 2001 an architectural competition was held to design a suitable bridge to be distinctive, yet in fitting with the town and its surroundings. The winner of the conceptual design competition, becoming the bridge designer, was COWI A/S of Denmark; the architect was Dissing + Weitling.

DESIGN OF THE BRIDGE

The bridge, designed by COWI, was a six-span cable stayed bridge with a concrete deck and a main bearing system consisting of two main girders crossed with cross beams of steel. In order to maintain the stiffness of the bridge the design also allowed for the top of the pylons to be fixed with horizontal stays. The bridge has two lanes for motor traffic, two narrower lanes for pedestrians and finally two lanes for cyclists.

There is however provision for future expansion to four lanes for cars should the need arise. The bridge is 262.5m long and 14.75m wide with a span length of 43.75m. In 2004 COWI A/S won a further design build competition related to the bridge design and in 2005 prepared the detailed design of the bridge in readiness for the contractors. The detailed design brief stipulated that there should be reasonable clearance below the bridge but also that the road should not be raised up too much (low
profile bridge).

The bridge construction contractors were Skanska Sverige AB and construction was undertaken from 2005, with the bridge opening to traffic in June 2006. Ruukki was the company responsible for the supply of the bearing structures, steel girders and pylons and also the steel pipe piles for use in the raised foundations of the bridge intermediate pier.

No ships use Munksjö Lake as it is land locked and for this reason the bridge construction was launched from only one side of the lake (total launching force 3,000t).

The bridge required 1,000t of girders and pylons and also 40 steel pipe piles to support the five intermediate piers. The piles (RR800/14.2 with rock shoes) were driven to a depth of 35–44m in the lake bed. The Plexiglass lighting on top of the ten masts of the bridge was supplied and installed by Hecker of Germany. The lights were HECKER-Sonderrohre (dimensions: 711 Ø mm, length 2,900mm and 10mm wall thickness).