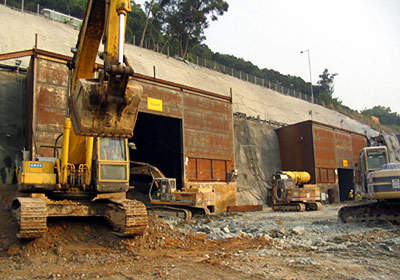 Blast doors to muffle the sounds of blasting during the Nam Wan Tunnel construction. 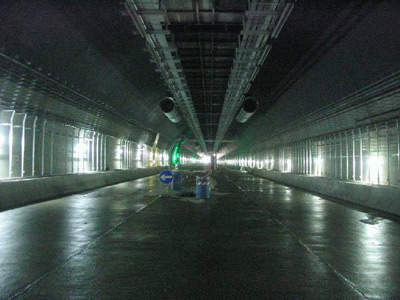 Inside the westbound tunnel. 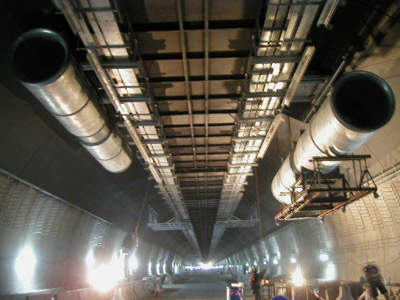 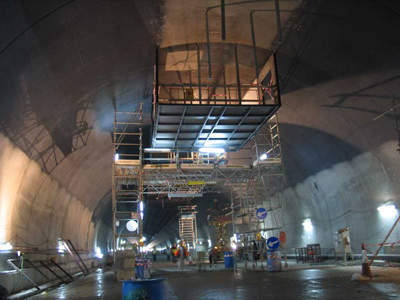 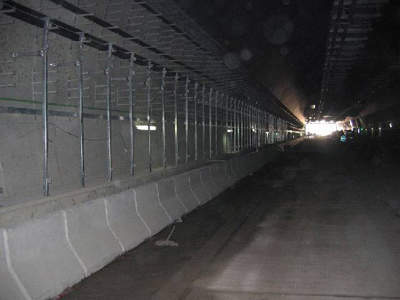 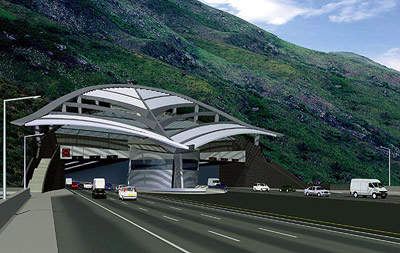 A computer-generated image of the Nam Wan Tunnel portal. 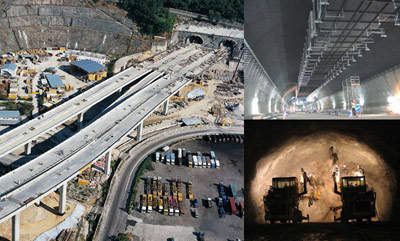 Construction of the Nam Wan Tunnel and motorway. 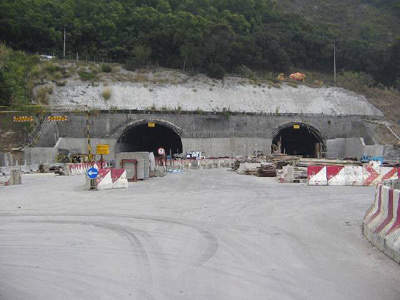 The Nam Wan Tunnel in Hong Kong is one of the engineering marvels of modern times. The road tunnel forms an important part of the HK$15bn Route 8, linking Tsing Yi and Sha Tin in the city. Construction began in 2003 and was completed in 2007. The tunnel was opened to traffic in December 2009.

The twin-tube tunnel, built by the Hong Kong Highways Department, is 1.2km long and has three lanes in either direction in the southern part of Tsing Yi from Sai Tso Wan to Nam Wan Kok. It provides linkage between the eastern part of the New Territories and Chek Lap Kok International Airport.

“The Nam Wan Tunnel will form an important part of Route 8, linking Tsing Yi and Sha Tin in the city.”

The tunnel is toll-free. The twin tunnels are 15m wide with 12 cross passages emergency walkways. A portal building at each end has been formed by blasting in granite and volcanic rocks.

Nearly all of the 550,000m³ of tunnel spoil was reused in the Penny’s Bay reclamation project or processed into aggregates at a local quarry.

Environmental measures taken to minimise noise and nuisance to road users and the public included: a 7.5m-tall noise barrier and continuous monitoring to ensure noise and vibration limits did not exceed during tunnel blasting; blast doors for any blasting conducted near roads; and 40 water sprinklers and washing facilities at all exits for vehicles to use before leaving the construction site.

The tunnel cross section is in the form of an arch. The approximate height and width of the arch are 11.2m and 15.3m respectively. The geology comprises coarse volcanic ash tuff on the west side and medium grained granite on the eastern side. Both of these lithologies are intruded by Rhyolite dykes together with some porphyrytic granite and occasional basalt dykes.

“Upon completion, the Nam Wan Tunnel will be toll-free.”

The two tubes were constructed using the drill/blast method. Temporary support for the tunnels was provided by rock-bolts. Permanent support has been provided by a concrete lining of varying thickness depending upon the stability of the ground.

The cost for the tunnel was HK$470m (civil works) and HK$83m (electrical and mechanical systems). Fläkt Woods provided the ventilation system for the tunnel.

COWI has provided specialist assistance to Ove Arup and Partners with the design of electrical and mechanical systems for the Nam Wan Tunnel and two adjoining viaducts.

Fläkt Woods provided the ventilation solutions by supplying three immense fans for the tunnel. The axial flow fans measure 2.65m in diameter, are powered by 900kW motors and run at pressures of 3,800Pa.

Fläkt Woods runs one of the fans continuously to self destruct, to prove their capability of withstanding temperatures of up to 400ºC for one hour. The fans incorporate guide vanes for flow straightening to achieve maximum performance and runs at 993rpm.

“The twin-tube Nam Wan Tunnel is 1.2km long and has three lanes in either direction.”

In the preliminary design phase of the tunnel COWI established an overall concept for the electrical and mechanical systems with emphasis on safety-related functions such as electric power supply, tunnel lighting, fire fighting, tunnel ventilation and smoke extraction. This overall concept was used as a basis for the detailed design.

Later in the project COWI reviewed the client’s detailed design of electrical and mechanical systems.