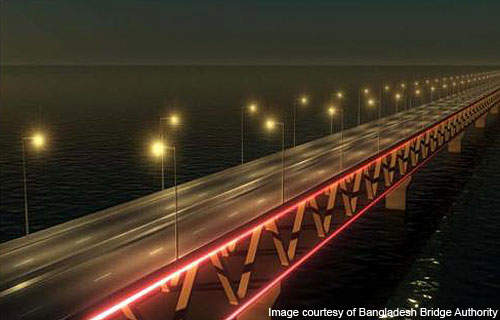 The Padma Bridge is a multipurpose road-rail bridge. 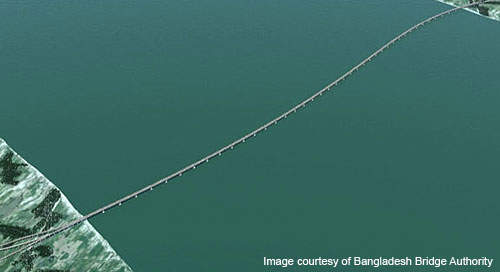 The bridge connects Mawa to Janjira, linking the south-west of the country to northern and eastern regions. 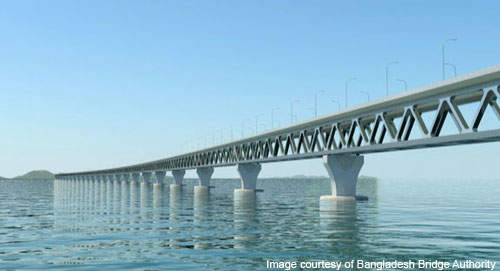 Padma Bridge was designed by AECOM. 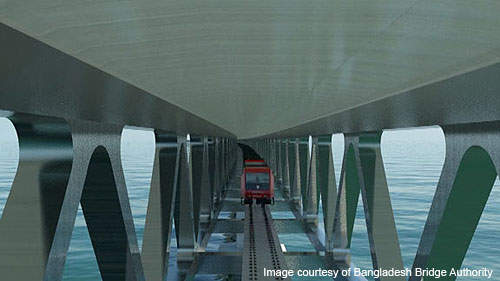 The project will include construction of a 6.5km long and 21.10m wide two-level steel truss bridge. 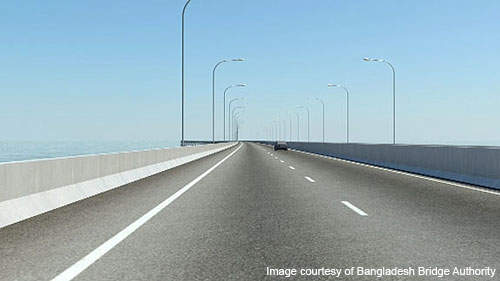 Truss steel will be used as material for the construction of bridge. 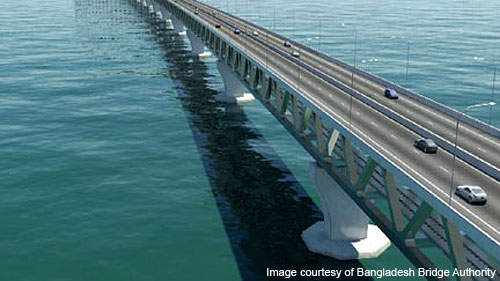 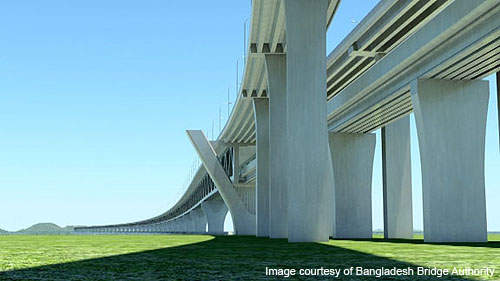 The JICA feasibility study anticipated that the volume of traffic at Padma Bridge will reach 41,600 vehicles a day by 2025.

The Padma Bridge is a multipurpose railroad bridge to be constructed across the Padma River in Bangladesh. The bridge will connect Mawa with Janjira, linking the south-west of the country to the northern and eastern regions. The Bangladesh Bridge Authority (BBA) is the executing agency of the project.

A feasibility study conducted by the Japan International Cooperation Agency (JICA) anticipated that the volume of traffic on the Padma Bridge will reach 21,300 vehicles a day upon the bridge’s opening and 41,600 vehicles a day by 2025.

The BBA invited pre-qualification tenders for the $2.92bn bridge construction project in April 2010. Construction was expected to begin in early 2011 and complete by the end of 2015. But following the alleged irregularities in the bidding process, the World Bank suspended $1.2bn funding for the project in October 2011. The bridge is expected to be the longest river crossing in South Asia..

The project is expected to generate employment opportunities for more than 743,000 people in the region.

The Padma Bridge project has been undertaken with the main aim of improving the social, economic and industrial development of the south-west region of Bangladesh.

The project also aims to provide the people in the south-west region with improved access to markets and services throughout the rest of the country while accelerating growth in Bangladesh as a whole.

“The bridge is expected to be the longest river crossing in South Asia.”

The Padma River divides the south-west zone from the northern and eastern regions of Bangladesh. Construction of the river crossing will reduce the distance from the south-west region to Dhaka, the country’s capital, by more than 100km, and will also bring savings in passenger and commodity movement time and costs. The bridge will ensure easier communication between the regions, and will also help in expanding education and training facilities.

The bridge will be approximately 6.15km long and 21.1m wide. It will be a double deck composite steel truss structure and will use 41 piers. The main spans will be 150m long. The upper deck will contain a four-lane highway, while the lower deck will house a rail line (to be built in the future), gas transmission pipeline, optic-fibre cable and power transmission lines.

The detailed design of the project was given the 2010 award for Best Safeguard Planning System by the Asian Development Bank (ADB).

“The project should generate employment for over 743,000 people in the region.”

Apart from bridge construction, the project will also involve construction of 15.1km of approach roads (2.3km on Mawa side and 12.8km on Janjira side), toll plazas, and facilities for dredging and river bank protection. River control works are under way.

The tender evaluation committee recommended a $50m contract to Canada-based SNC-Lavalin to supervise construction of the main bridge. The WB’s decision to suspend the funding followed the allegation of irregularities in appointment of the consultant.

In February 2011 the World Bank, the lead financier and coordinating agency of the multi-donor project, approved $1.2bn concessional credit. It has already processed a $3m Project Preparation Facility to start the preparatory works.

However, Japanese lending is expected to be delayed as the lending institutes are focused on rebuilding activities in Japan following the major earthquake and tsunami of March 2011.