Height of roadway when lowered

Height of roadway when lowered 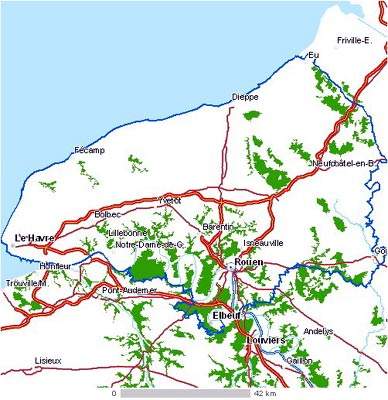 Rouen now has six bridges crossing the Seine, with Pont Gustave Flaubert being the sixth. 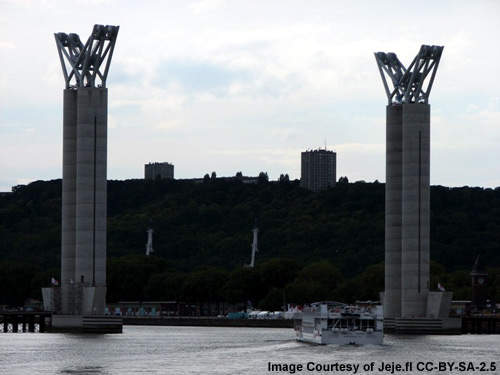 The two towers of the Pont Gustave Flaubert are 86m high and support the lifting equipment and the decks. 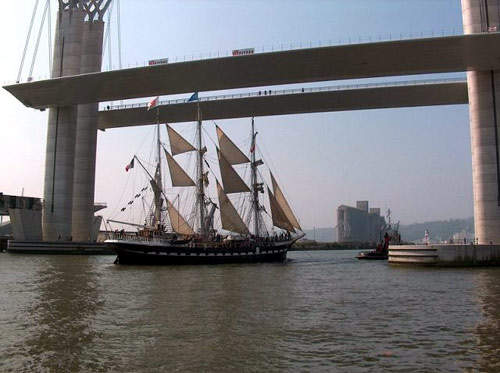 The decks of the bridge are lifted up to 55m high to let ships through. 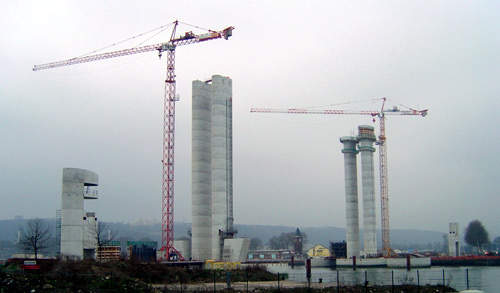 Pont Gustave Flaubert will carry an estimated 50,000 vehicles per year and will lift on average 30 times a year.

The new Pont Gustave Flaubert is the sixth crossing of the River Seine in the city of Rouen and at 86m, is the highest lifting bridge in Europe. The bridge will be able to undergo lifting operations to allow large vessels (cruise ships and sailing ships up to 40,000t) to travel upriver towards the city centre. The structure has a novel platform lifting concept, a butterfly-shaped cross-leverage system.

The design has two independent cable lifting spans between two pairs of hollow lifting towers and was put in place to support the new north-south highway connection through the city. A new bridge was required to allow traffic coming from the exit of the A150 (between Rouen and Barentin) and A151 to the north-east of Rouen, to reach the port zone to the west of Rouen and the A13 autoroute to the south, without having to traverse the city centre. The Pont Gustav Flaubert links the exit of the A150 motorway and the Sud III ring road RN 338, A13 (to the south of Rouen) and A29 (to the north of Rouen).

The bridge was designed by a team consisting of Arcadis (Michel Virlogeux as consultant), with a structural design team consisting of Bernard Gausset and Michael Moussard, architect Aymeric Zublena and Francois Gillard along with M&E consultant Eurodim and mechanical engineer Jean Pierre Ghilardi.

The bridge has cost €60m to construct but the total project including the approach roads will cost €137m. It will carry an estimated 55,000 vehicles per year and will lift on average 30-40 times a year, taking 12 minutes to raise. Road traffic is diverted over the Pont Guillaume le Conquérant during the 1½ hour period when the bridge is raised.

At the location chosen for the bridge the river is only 180m wide and the basic clearance requirements for the crossing were a minimum opening of 86m, a height of 55m (vertical clearance) when lifted and 7m when in the lower position. The two high towers which carry the lifting equipment and guide the spans are about 80m high. The two independent spans (can be independently lifted) each carry three carriageways and a 2.5m walkway and are 18m wide.

The total length of the roadway is 670m and the liftable section is 116m long; the weight of each roadway is 1,200t. The towers are placed in between the spans with lifting equipment overhanging them on both sides. Each of the two towers has two hollow concrete shafts that are supported on an elliptical caisson. This shape minimises interference with the river flow.

At the top of the towers is a steel structure which supports the pulleys of the lift system on three parallel frames; the form of this is where the term ‘butterfly’ came from and these weigh 450t each. Each of the spans can be lifted independently through synchronised winches inside the supporting caissons. The spans, which were designed as box beams are constructed entirely of steel to minimise the weight and the road surface overlay is of a 12mm-thick epoxy composition.

The design has been made additionally safe by the fact the cables are coupled so that if one fails its load can be transferred to an adjacent cable. The span/decks are kept ‘locked’ in the upper position by the electrical motors of the winches (motors act as brakes) and there is no specific mechanical locking. The spans are guided in their up and down motion at each end by rollers in a groove alongside the tower shafts.

“The bridge has cost €60m to construct but the total project including the approach roads will cost €137m.”

The main construction contract was awarded in 2004, with construction started June 2004, to a design/construction consortium including: Quille (Bouygues Group), Eiffage, Eiffel, Victor Buyck, Arcadis (civil engineering), Presspali (foundations). Eiffel and Victor Buyck fabricated the steel sections for the decks at their sites in France and Belgium. Decks were transported by barge to the construction site and lifted by cranes on pontoons.

Construction of the main crossing was completed in 2006 and the first test lifting was carried out in April 2006. The approach viaducts were completed by spring 2008 and the bridge and road were opened to traffic in September.

The caissons and gabions were constructed in situ in two steps: they were cast above water level and were then lowered into place using a system of jacks and cables. VSL was the subcontractor responsible for this. The tower shafts themselves were cast in situ using jump-forms.