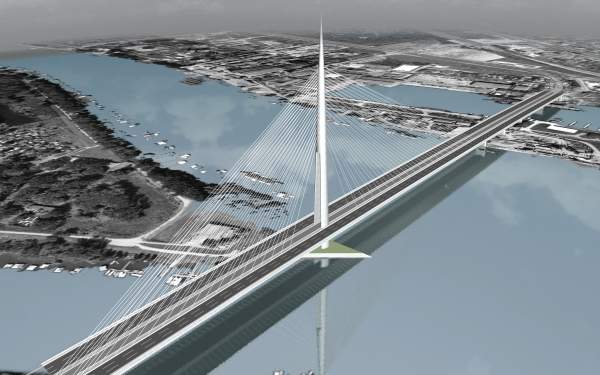 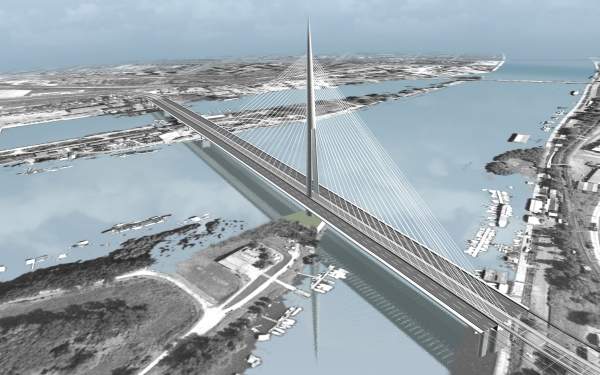 The new bridge is being constructed over the Sava river island Ada Ciganlija. Image courtesy of Louis Berger Group.

The Sava bridge is 929m long and is comprised of seven spans. Image courtesy of Louis Berger Group. 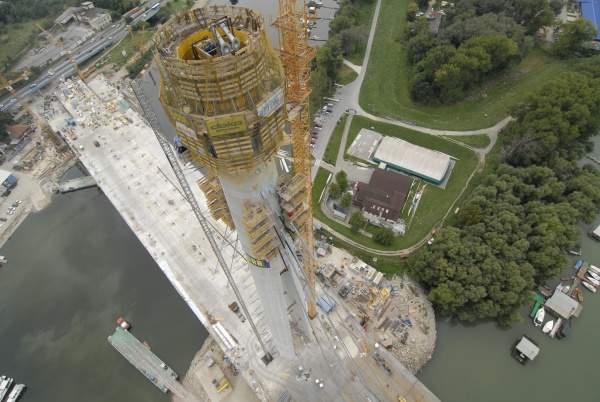 The pylon will be 200m high and is a needle / cone shaped concrete structure. Image courtesy of Louis Berger Group. 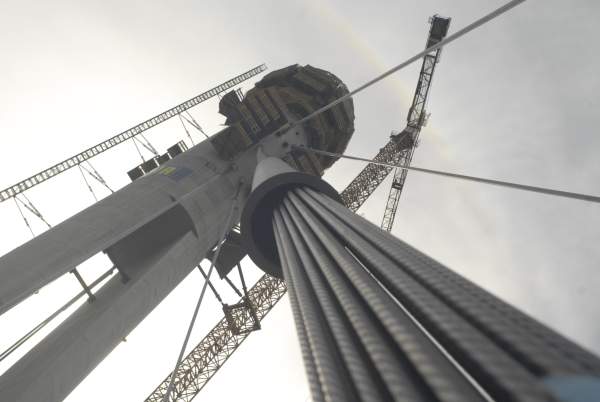 The radius of the pylon decreases from 16m at the base to 4m at a height of 175m and a 1.5m diameter at the apex. Image courtesy of Louis Berger Group.

Sava River Bridge or the Ada Bridge is a single pylon cable-stayed bridge under construction over the river Sava at island Ada Ciganlija in Belgrade, Serbia.

The bridge was constructed to reduce the traffic congestion occurring in Belgrade. It is part of the Inner City Semi Ring Road (ICSRR) and linked to the city highway.

"The entire project including the construction of the bridge is estimated to cost £320m."

The bridge diverts traffic from the highway to the semi-ring road and vice versa. Economic studies have revealed that the existing roadway will face a severe traffic collapse by the end of 2021.

The bridge was opened in January 2012 along with the ICSRR viaducts, and north and south ramps. Construction of adjoining roads is ongoing. The entire project will be completed by 2013.

The project involved construction of the bridge, the southern approaches and the northern approaches. The bridge is a single pylon asymmetrically built structure.

The bridge is single pylon cable-stayed, the largest of its kind in Europe. It is 929m long and 45m wide with six traffic lanes, two pedestrian or cycling pathways and a single rail line. It is supported by 80 stay cables fixed to the needle like pylon situated at a height of 200m.

The bridge comprises seven spans. The main span is 376m long and is provided with two hydraulic lift-push equipments. It is counter balanced by a 200m long back span.

Side span forms the northern section of the bridge. The southern side of the bridge is connected to the approach roads through an end span.

The needle / cone shaped concrete pylon is founded 37m deep on a circular diaphragm wall. The radius of the pylon decreases from 16m at the base to 4m at a height of 175m and a 1.5m diameter at the apex.
The lower part of the pylon is split into two legs situated at a height of 98m from the base. The legs penetrate to the street lanes and light rail track. One of the legs is provided with an elevator whereas the other has a shaft provided with emergency stairs.

Construction of the Ada Bridge

The main span was built without any temporary supports. The back span and pylon were linked to each other through a pier table after construction was completed. The side and main spans were constructed simultaneously.

The construction work was initiated in April 2009. Steel fabrication was carried out in China in June 2009. Piling works were completed in July 2009.

The first fabricated superstructure steel segments were delivered on site in November 2009. The cable stayed bridge was installed in August 2010. The Hippodrome interchange, a 600m four-way dual carriageway, was opened to traffic in December 2010.

The Ogranak Sava Most consortium won the design and construction contract of the bridge in April 2008. The consortium includes PORR Technobau und Umwelt, SCT dd. and DSD Bruckenbau.

PORR is the coordinator and involved in the construction of all the piled foundation works, substructure, superstructure, pylon and installation of bridge cables.

DSD supplied the structural steel required for the main span. SCT supplied the reinforcing steel for pylon concrete and was also involved in the construction of the side span.

"The bridge was constructed to reduce the traffic congestion occurring in Belgrade."

The preliminary design of the bridge was provided by Ponting Maribor in 2006 and the main foundation bridge was designed by LAP Stuttgart and DCF Vienna.

Cost of the entire project including the construction of the bridge is estimated at £320m. It was jointly financed by city of Belgrade, European Investment Bank (EIB) and the European Bank for Reconstruction and Development (EBRD).