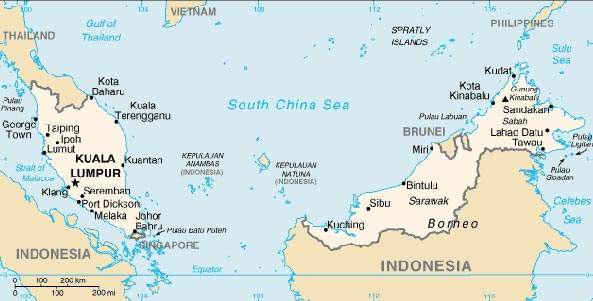 Johor in Malaysia is a popular destination for tourists but its road infrastructure is in need of severe improvement. 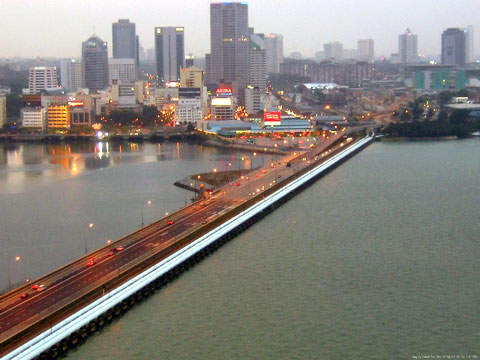 Johor Bahru City in the background is also connected to Singapore via this causeway. The bridge across the Johor River will now help to integrate transport infrastructure in the area and aid the economy.

The cable-stayed bridge has a single central plane of cables in a harp configuration. 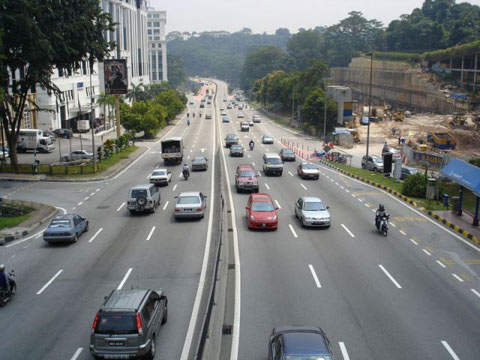 The Senai Desaru Expressway will have four lanes each way but will likely be as busy as the Sprint Highway in Malaysia.

The Senai-Desaru Expressway (SDE) is built in the Johor region of Malaysia. The 77km expressway was constructed at an estimated cost of RM1.46bn and was opened in June 2011.

It links Senai in the west coast of Johor to the industrial town of Pasir Gudang in the south and the coastal resort of Desaru in the east of Johor.

Senai Desaru Expressway Berhad (SDEB) is the concession (operator) holder for the road for the next 33 years. The concession was granted by the Malaysian Highway Authority (LLM) in 2004 with three years to build.

Construction began in 2005 and the first phase of the road from Senai to Pasir Gudang was completed in September 2009. The main contractor for the road project was Ranhill Bersekutu.

Phase 2 of the project, including the cable-stayed 1,708m-long Sungai Johor bridge across the Johor River, was completed and opened in June 2011. It is one of the longest single (central) plane cable-stayed bridges in Malaysia.

“The first phase of the road from Senai to Pasir Gudang was completed in September 2009.”

The finance for the road and bridge project was raised by SPGDE by Islamic debt securities in accordance with the Syariah principle of Al Bai’ Bithaman Ajil.

The new road is a four-lane dual carriageway and improves access across the region of Johor, particularly access to Senai International Airport from Kota Tinggi and eastern Johor. The road features a closed toll system which over the 30-year concession is expected to pay for both the road and bridge.

Maintenance is undertaken by the concession holder SDEB and Ranhill. The road starts at Senai and links to Setia Indah, Taman Daya, Ulu Tiram, Pasir Gudang, Bandar Penawar and Desaru cities. The road is the major access to Desaru from the North-South Expressway (southern route E2). The road includes five toll plazas and four interchanges. The journey time from Senai to Pasir Gudang is reduced from one hour to 23 minutes.

Construction of the cable-stayed bridge across the Johor River began in 2006; the bridge was first planned in 1996 but the Asian currency crisis put paid to it at the time. The bridge connects Kong Kong on the western bank to Teluk Sengat in the east.

The preliminary and detailed design and engineering work was carried out by COWI Consulting Engineers and Planners and Ranhill Consulting for Senai Desaru Expressway Berhad (the concession holder). Three Ranhill engineers spent six months in Denmark with COWI designers to develop the design of the bridge.

The main span of the bridge is 500m and the pylon height is 150m above the surface of the river. The cable-stayed design of the bridge is in a harp configuration but in a single central plane (only one set of stay cables).

This means the cables are in a near-parallel arrangement, by virtue of the fact that the cables are attached to various points on each of the two ‘A’ shaped concrete pylon towers.

“The new road is a four-lane carriageway and improves access across the region of Johor.”

Each tower has a foundation of 34-bore 2m-diameter steel cased piles. The result of this is that the height of attachment of each cable on the tower is similar to the distance from the tower along the roadway to its lower attachment.

The middle 739m of the bridge has a composite deck with a 250mm-thick precast concrete deck slab and a closed structural steel skirt (3.5m deep).

There are two 484.5m deck sections on either side of the central section and these consist of a concrete box girder structure.