Diagram of the Sidney Lanier bridge. 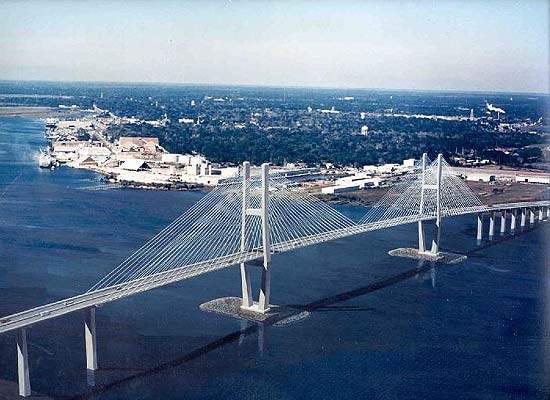 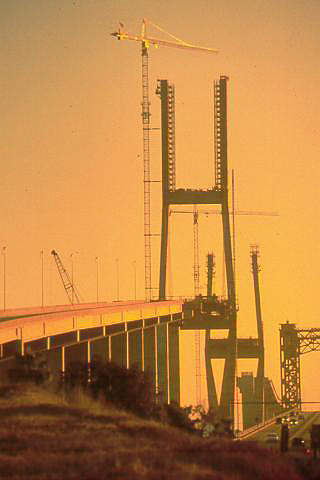 The new Sidney Lanier Bridge is a cable-stayed bridge and is the longest in the State. 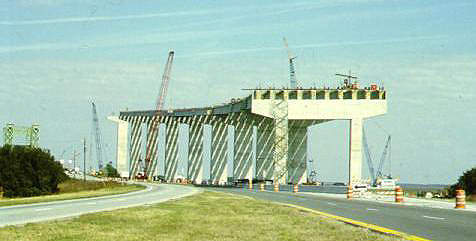 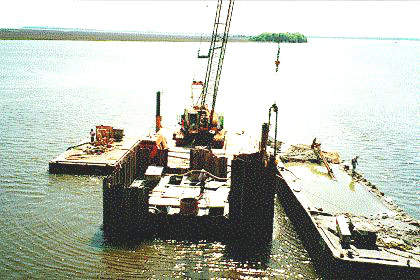 The southern approach of the Sidney Lanier Bridge. 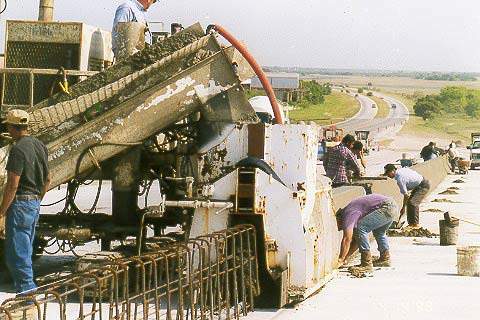 Building the cofferdams for the Sidney Lanier Bridge.

The new Sidney Lanier Bridge, a cable-stayed bridge, was built on the South Brunswick River to replace the previous Sidney Lanier Bridge in Brunswick, Georgia, US. The new bridge, which opened in 2003, is the longest spanning bridge in the state and allows larger ships to enter the port of Brunswick.

In 2005, the bridge received the Engineering Excellence award from the Consulting Engineers and Land Surveyors of California (CELSOC).

The original Sidney Lanier Bridge was built by Sverdrup & Parcel in 1956. It utilised a lift span system, meaning that as ships passed through, road traffic on the bridge came to a halt. With an average of 20 ships passing per day, the bridge was often closed.

The 139ft-high and 250ft-wide bridge was mired with problems and was often closed for repairs. This caused lengthy deviations to the west for Brunswick-bound traffic, creating a lot of inconvenience to the travellers.

“In 2005, the bridge received the Engineering Excellence award from the Consulting Engineers and Land Surveyors of California (CELSOC).”

In 1972, the bridge was hit by a ship named the African Neptune, resulting in ten deaths and damage to the main span. The bridge was severely damaged again in 1987 when one of its support towers was hit by a Polish freighter Ziemia Bialostocka. As a result, it was out of service for several months and was finally closed in March 2003 to make way for the construction of the new bridge.

The new bridge was designed by DRC Consultants in New York City (later merged with T.Y. Lin of San Francisco). The towers are 486ft tall from the top of the footing to the top of the tower. The uprights are joined in two places by crossties, one below the cables and the other below the roadway.

The tower is hollow and an elevator goes up to the upper crosstie. Ladders take inspectors above the crosstie for access to the anchorages for the cable stays. Ladders also extend from the roadway down to the bottom of the towers.

The deck is continuous from one anchor pier to the other. The anchor pier is strong enough to support the deck, but also flexible enough to accommodate the large deflections that arise as temperature shifts change the length of the deck. The deck is supported by the cables and carries the enormous compression force that results from the angle of the cable stays.

The form travellers, originally fabricated in Europe, were assembled on the island below, one on the south and one on the north. When they began operations, each traveller was moved out from the tower one segment at a time.

The primary purpose of the form traveller was to hold the wet concrete until it hardened into the proper shape.

The form was then stripped from the hardened concrete. To achieve this, all surfaces of the form were able to move.

Construction of the bridge was broken into three contracts.

The main span of the bridge was built by Recchi-GLF, a joint venture, for a cost of $65.5m. It was designed by DRC Consultants in New York City (later merged with T.Y. Lin of San Francisco). The main span contract includeD part of the approach spans. The bridge is being paid for by the State of Georgia and the United States Coast Guard.