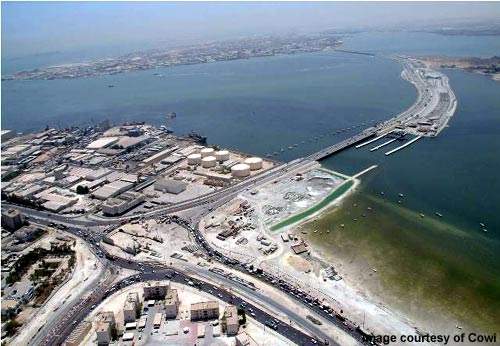 An overview of the bridge and causeway project, set to replace the two old concrete bridges. 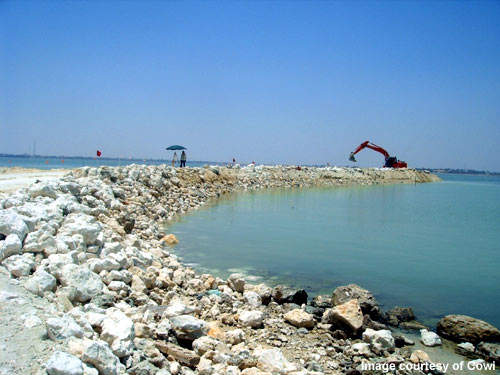 Construction of the causeway; the bridges will withstand a harsh marine environment. 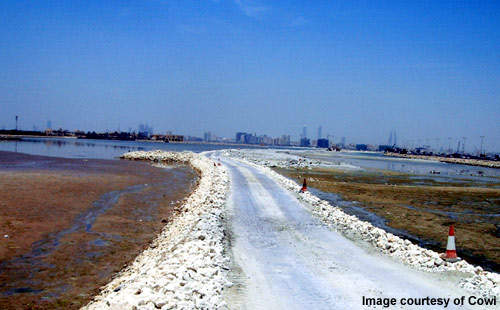 The causeway and bridges will provide the main link between Sitra and Manama. 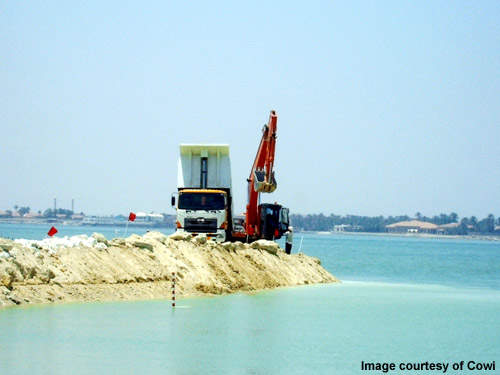 The Sitra Causeway project will be completed by June 2009. 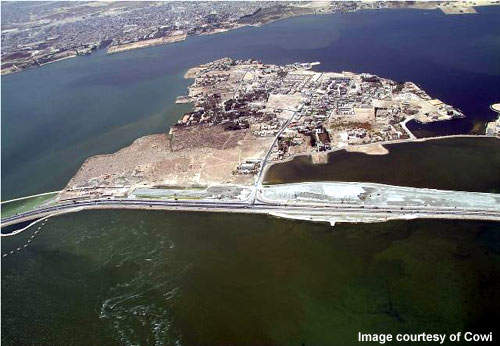 Nabeh Saleh Island, the middle of the causeway, will have one of the project's flyovers.

The Sitra Causeway project in Bahrain was planned in June 2005 to replace the two previous concrete bridges between Sitra and Manama. These were built in the 1970s and were past viable repair. They could no longer handle the traffic volume being directed to them by the surrounding road system: >6,000 vehicles per hour, with heavy goods vehicles forbidden.

The causeway and bridges are a major traffic link in the road network of the country, providing the main link between the capital Manama on Bahrain Island and the Nabih Saleh and Sitra lslands.

“The project is made more difficult by the fact that the original bridges are needed to transfer traffic right up until switchover to the new ones.”

Consequently, the Ministry of Works & Housing instigated a $266m three-year project, which started in the third quarter of 2006, to replace the entire Manama-Sitra Causeway (previously dual two-lane) with a dual four-lane structure. The project was expected to be completed by June 2009, but, due to delays, it was opened in October 2010.

The project was made more difficult by the fact that the original bridges were needed to transfer traffic right up until switchover to the new ones. The new bridges were built alongside the old ones and also new conduits for gas pipelines, electricity high-voltage cable, fibre optics, water mains, sewerage pipes and telecommunication services.

The old bridges will be demolished, hence the need for new service conduits which are an integral part of the old bridge.

The new bridges and associated road infrastructure, including embankments, were designed by international consultants Cowi Almoayyed. The bridges have been designed for a service life of 120 years in harsh marine environments. This is being made possible by the use of stainless steel reinforcements in the most exposed areas of the bridge.

The two bridges were constructed from post-tensioned concrete. The south bridge dimensions are 400m long and 55m wide, while the north bridge are 200m long and 58m wide. In addition, there is an embankment structure of approximately 2.4km across the shallow waters of Tubli Bay.

“The bridges have been designed for a service life of 120 years in harsh marine environments.”

There are also interchanges at each end of the bridge-causeway-bridge structure. The Umm Al Hassam junction (northern end), which is near Mina Salman, was redesigned incorporating three levels with an underpass, a flyover and also the current level.

The main contractor for the construction of the bridges and causeway was Gamuda of Malaysia and the consulting engineers for the project are Lardis & Partners Consulting Engineers (responsible for advising on the original Manama-Sitra Bridge).

Rock quarry run bund construction and rock armouring along the new Sitra Causeway is the responsibility of Al Hassanain of Bahrain.

The project involved the construction of two marine bridges and embankment works together with grade separated interchanges at both ends of the Sitra Causeway and Nabih Saleh Island in the middle to replace the existing Sitra Bridge and causeway arrangement..

Flyovers were opened in July 2010 at Umm Al Hassam and North Sitra. They are constructed at the northern and southern ends of the causeway, as well as at Nabih Saleh (Nabih Saleh Island) in the middle section of the causeway.