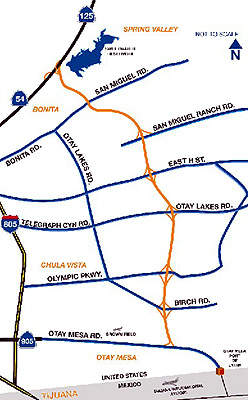 Final focus map of the route. 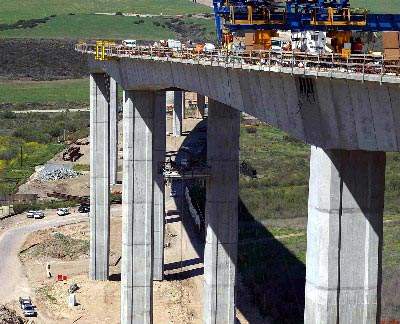 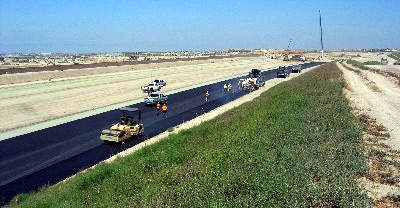 Paving underway on one of the road sections. Paving began in summer 2006. 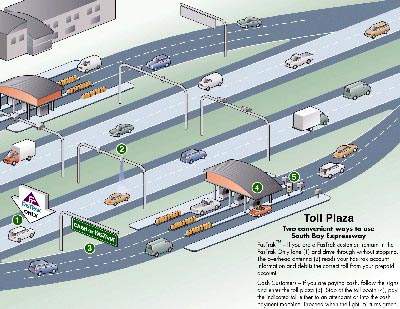 The toll plaza on the new road, which will use the FasTrak system. 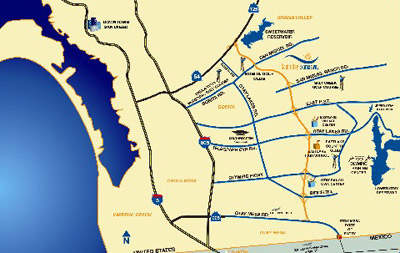 A map of the route showing the surrounding road network. 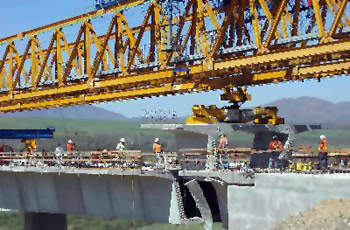 Another of the road bridges on the route being constructed. 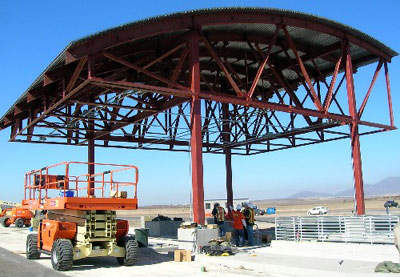 The toll plaza under construction in autumn 2006.

The construction of the new South Bay Expressway, connecting SR-54 and SR-905 in San Diego County, California, US was started in 2002 and was completed in November 2007 at an investment of $773m. The 12.5-mile road stretches from SR-54, near the Sweetwater Reservoir, to SR-905 in Otay Mesa, near the US / Mexico international border. The highway links the neighbourhoods of east Chula Vista with job centres in the north and the growing industrial corridor along the border.

The expressway has greatly reduced traffic congestion on local streets in Chula Vista and Bonita, as well as on the parallel I-5 and I-805.

“Nearly 200,000 vehicles per day will travel this section of the new South Bay Expressway.”

The project has also provided an additional access to the Otay Mesa Port of Entry as the existing road along Otay Mesa Road was becoming extremely busy. In addition to relieving this local bottleneck, the new north-south highway has also provided much-needed access to developing communities in eastern Chula Vista. Together with the connecting sections of the new South Bay Expressway to I-8 and SR-52, the new South Bay Expressway has provided a new north-south traffic corridor linking the border area and new neighbourhoods in eastern Chula Vista to the greater San Diego region and beyond.

The new South Bay Expressway was designed and constructed through an innovative public-private financial partnership between the State of California and California Transportation Ventures Incorporated (CTV), a private consortium selected by Caltrans in 1990. The southern portion of the project, estimated to cost $635m, was financed by CTV through a combination of funding sources and is operated as an express toll road from SR-54 near Sweetwater Reservoir to SR-905 (Otay Mesa Road).

After completion of the expressway, CTV is operating and maintaining the toll road portion of the project. After the required 35 year concession, CTV will return the toll road back to Caltrans.

The financing structure of South Bay Expressway was unique and included bank loans, a $140m federal loan facility provided by the US Department of Transportation under the TIFIA programme (Transportation Infrastructure Finance and Innovation Act of 1998) and private equity capital. Additionally, area developers had dedicated right of way valued at $48m to the South Bay Expressway project.

In addition, the northern end of the South Bay Expressway project, a cost of $138m, was funded through local financial support committed by San Diego Association of Governments (SANDAG). The SANDAG funding was dedicated for the construction of the Gap and Connector sections of the project, important un-tolled links that connect the tolled section of South South Bay Expressway to the existing San Diego freeway network.

South Bay Expressway was a two-stage project and consisted of 12.5 miles of new highway connecting SR-54 near the Sweetwater Reservoir to SR-905 in Otay Mesa near the international border. The project was divided into three segments. The first two segments were the ‘Gap’, (a 3.2 mile publicly funded section of highway running from SR-54 to San Miguel Road in Bonita), and the ‘Connector’, (an interchange involving the reconstruction and expansion of an existingsection of SR-54 where it intersects with the new South Bay Expressway).

“Once open to traffic, CTV will operate and maintain the toll road portion of the project.”

The expressway was constructed in two phases. Phase I included the construction of an initial six-lane freeway from SR-54 to Jamacha Boulevard, the ‘Gap’. Phase II saw the construction of 9.3 miles of four-lane highway from south of SR-54 near the Sweetwater Reservoir to SR-905 near the international border. This section is being operated as a toll road.

At its peak, the four-lane Otay River Bridge is nearly 19 storeys tall and connects communities and businesses across the South Bay to Otay Mesa and the International Border. The Otay River Bridge is nearly ¾ of a mile long and 75ft wide, enough to carry four lanes of traffic. Typical spans between columns are 300ft long. The bridge is made of post-tensioned concrete, where the concrete is squeezed by high-strength steel strands to prevent cracks.

The segments were casted in a facility in Perris, California, approximately 90 miles north of the project site and were lifted into place by a steel erection gantry, which was manufactured in Italy and shipped to the site. The segments were erected using a ‘balanced cantilever method’, which minimises the construction loads applied to the columns.

“The project will reduce drive-time from Eastlake to downtown San Diego by 34% and to Otay Mesa by 75%.”

There was a total of 470 miles of post-tensioning strand, enough to reach from San Diego to San Francisco. Each strand is strong enough to support 30 tons, the weight of a fully loaded concrete mixer truck. The tallest column is 190ft (19 storeys) from foundation to deck. Each pair of columns rests on a rectangular pile cap, which is 75ft wide, 50ft long and 10ft thick, and took more than 100 concrete trucks to pour.

The expressway has reduced drive-time from Eastlake to downtown San Diego by 34% and to Otay Mesa by 75%, improving regional mobility in the South Bay and access for residents and businesses to the employment centres on both sides of the US / Mexico border.

The South Bay Expressway offers customers complimentary roadside assistance, including help when one run out of gas, need fluids, break down or get a flat tyre. Commuters in eastern Chula Vista will avoid 14 traffic signals that currently stand between them and the 805 Freeway.