Four lanes can handle over 30,000 vehicles per day

The Svinesund Road Bridge, connecting Norway and Sweden across the Ide Fjord, is one of the world's largest single arch bridges. The bridge officially opened to traffic on Sunday 12 June 2005. 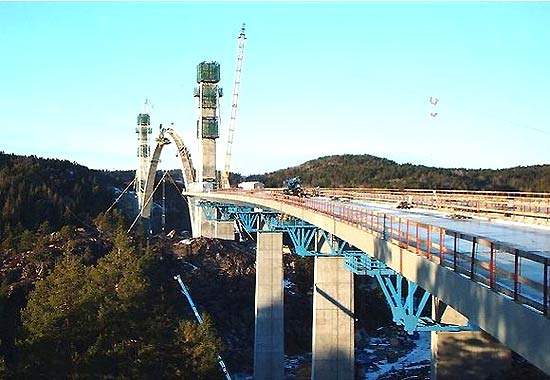 Construction of the arch showing the cable stays and the auxiliary towers. 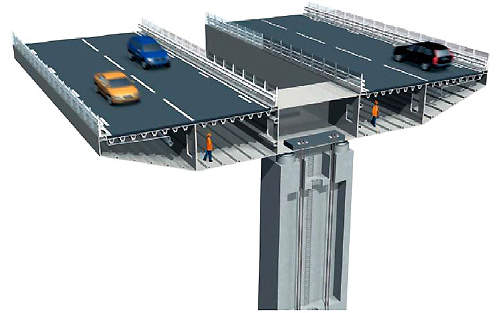 Cross-section of the bridge superstructure. 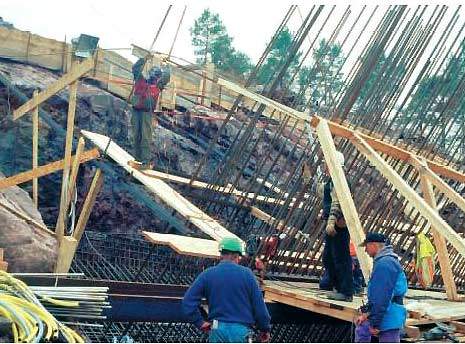 Laying the foundations for the arch. 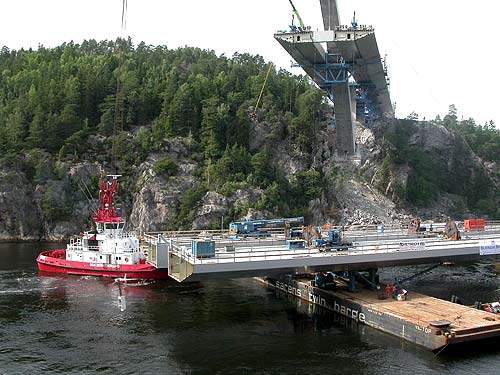 The middle section of Svinesund Bridge was lifted into place from barges on the river. 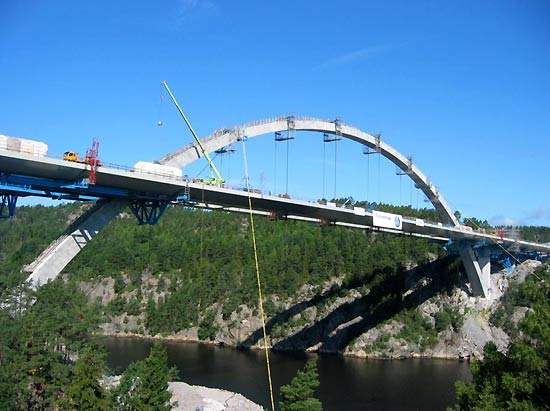 The old Svinesund Bridge seen from the top of one of the auxiliary towers of the new bridge. 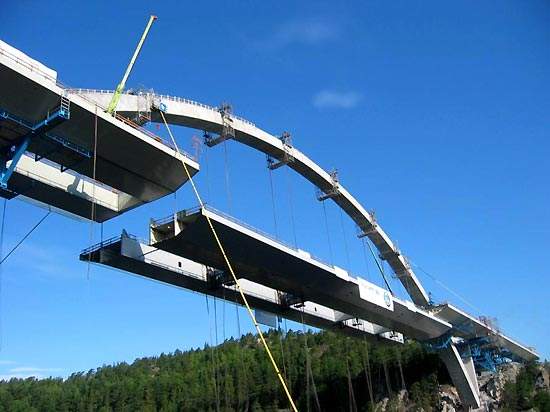 Middle section of Svinesund Bridge being lifted to its final position. 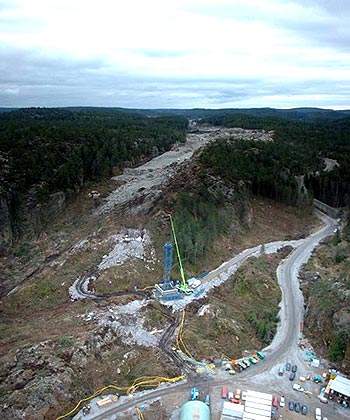 E6 road on the Swedish side being rerouted to join bridge. 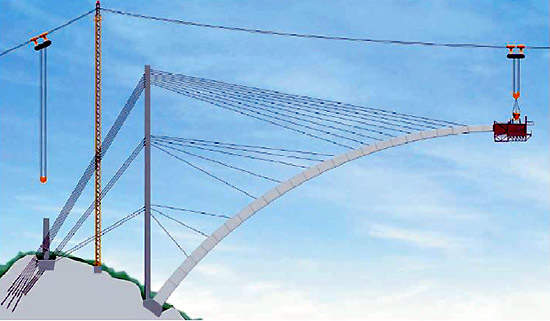 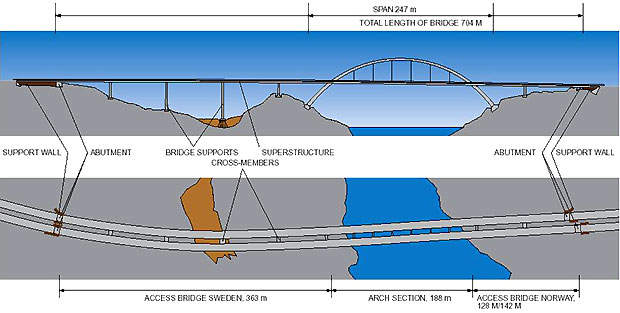 The Svinesund road bridge connects Norway and Sweden across the Ide Fjord and was opened as part of the celebrations for the 100-year anniversary of Norway’s independence from Sweden.

The bridge design was the result of an international architectural competition started in 2000 that was won by the Norwegian architects LSA in 2002. This project was accompanied by a much-needed upgrade of the E6 road linking Gothenburg in Sweden and Oslo in Norway; the 6.7km E6 has an Average Annual Daily Traffic (AADT) of 8,000 vehicles, where 15% are heavy goods vehicles.

The road upgrade was partially funded by the conversion of the E6 to a toll road. Construction of the bridge, which is one of the world’s largest single arch bridges, began in 2002 and the opening ceremony occurred on 10–11 June 2005, 36 months later. The bridge officially opened to traffic on Sunday 12 June 2005.

The bridge was a jointly funded and administered project between the highway departments of Norway (Norwegian Public Roads Administration, Statens Vegvesen) and Sweden (Swedish National Road Administration, Vägverket). The cost of the 704m structure along with the connecting roads is estimated at €150m (NOK1.3bn).

“Construction of the bridge, which is one of the world’s largest single arch bridges, began in 2002.”

Svinesund Bridge is a road bridge across the Ide Fjord joining Sweden and Norway. The bridge is 704m long and comprises a substructure in ordinary reinforced concrete with a steel box-girder superstructure. The main span of the bridge between abutments is approximately 247m and consists of a single ordinary reinforced concrete arch carrying two steel box-girder bridge decks, one on either side of the arch. The top of the arch and the bridge deck are 91.7m and 61m above the water level, respectively.

Where the arch rises above the level of the bridge decking, the two bridge decks are joined by traverse beams positioned at 25.5m centres. The traverse beams are then supported by hangers to the concrete arch. Cross girders connect both boxes only at the bridge’s supports, so that the total width of the superstructure amounts to 28m including the gap of 6.2m between the boxes.

On both sides of the fjord the superstructure is settled on 6.2m-wide, single concrete piers with rectangular hollow sections. To cope with the large uplift reaction on the supporting piers the cross girders of the superstructure have to be anchored with tendons inside the piers.

The concrete arch was constructed so that it had an approximately rectangular hollow section that tapered in two directions, reducing the section of the arch from the abutment to the crown in both width and height. The section at the abutment is 6.2m wide by 4.2m high, with vertical and horizontal wall widths of 1.5m and 1.1m, respectively. Close to the crown, the section reduces to 4m wide by 2.7m high with a wall thickness of 0.6m and 0.45m. This combination of small section and large span makes it one of the most slender arched-bridges in the world.

The superstructure is joined to the arch at approximately half its height. The steel bridge deck is fully fixed at the junction to the arch and assists in providing lateral stability (prevention of out-of-plane buckling) to the arch.

The use of the letters S and N refer to the Swedish and the Norwegian sides. The numbering 1-25 starts at the abutment and proceeds to the crown, with segment N26 forming the crown (keystone).

The bridge was spilt into several substructures in addition to the abutments on each side of the fjord supporting the arch. There are four piers in the Swedish foreland and one in Norway. All of the substructures have foundations directly into rock except pier 4, which is supported by steel core piles in a bed of self liquidating clay.

On the Swedish side, from axis 1 to 5, the superstructure was erected using the incremental launching method. Bridge segments 24m long by 5m wide (fabricated in Germany and delivered by barge) were assembled and welded together in a launching station behind the southern abutment, before being pushed forward in sections of 75m. The segments passed over the piers on sliding bearings as the construction moved forward.

Since the width of the superstructure (28.0m) exceeds the size of the pier heads (6.2m), the supporting area on the piers had to be widened by large scaffolds suspended on the top of each pier to prevent the bridge from falling during the construction process.

“The bridge is 704m long and comprises a substructure in ordinary reinforced concrete with a steel box-girder superstructure.”

When the superstructure was in its final position above the pier in axis 5, the sliding bearings were replaced by spherical bearings which supported the bridge in a vertical and transverse direction on each pier and the adjacent abutment. On piers 3 and 4 the bridge is also held in longitudinal direction, but it has freedom to move in other axes.

Excessive weight on the bridge bed which could cause movement of the piers is counteracted by load tendons anchored inside the piers which act in a complementary fashion with the spherical bearings by creating a steady pressure.

The bridge cables are ‘locked coil type’ and have a diameter of 90mm. The coil has a core made up of a number of 5mm seamless steel wires. Around the core, there are several layers of wires with profiled cross-sections that lock into one another. Both types of wire are galvanised to prevent corrosion.

The bridge main arch is electrically heated at its top section during the winter to prevent ice formation, which could potentially fall on vehicles or on to the road. The electric cable system is controlled by temperature sensors and it is estimated that the system will only be in use for 30 days in the coldest period of every year.

The designers of the bridge were the Norwegian architects LSA. The main contractors and structural engineers were Bilfinger Berger AG and Ingenieurbüro Meyer and Schubert. IWS Beratende Bauingenieure was the construction engineer. The steel construction contractor was Brückenbau Plauen and Sachsische Anlagen-und Maschinebau GmbH. The stay cable steel supplier was Trenzas y Cables de Acero PSC S.L and the stay cables were erected by Bilfinger Berger Vorspanntechnik GmbH.

E. NIGG of Switzerland, assisted by Skailand Kranservice (crane maintenance and adjustment) and Skiheis-Service AS (technical consultants), were the crane subcontractors. Additional crane services for tower construction on the Norwegian side were provided by Vestkran A/S of Bergen, using their Liebherr LTM 1400.

“From July 2005 tolls were charged to use the Svinesund Bridge.”

Road connections to the bridge were constructed by Vagverket Produktion (Nordy to border, 2km) and Mesta AS and Veidekke ASA (Svingenskogen to border, 4km). The roads leading to the bridge on either side will carry a toll charge.

From July 2005 tolls were charged to use the Svinesund Bridge. The toll system adopted comprises four tolling plazas across the two parallel bridges (old and new Svinesund bridges) connecting Norway and Sweden via the E6 road. There are 15 lanes at each of the toll plazas equipped with state-of-the-art tolling technology made and installed by Tecsidel of Spain. The dedicated short range electronics (DSRC) for the transponder equipment at the tolls was supplied by Kapsch TrafficCom AB.

The electronic road tolls have been modified and adapted so that the same transponders, with the brand name Bro-Bizz, may be used in traffic systems across Denmark and Sweden including the Öresund Bridge. The system will also be compatible with Autopass transponders used in Norway. In fact a motorist can travel from Oslo to Hamburg over a number of bridges using the same onboard transponder unit.

The tolling system also operates in manual where the driver simply pays the toll as they pass through. There is a signal light system in operation where green means that the transponder has paid the toll and yellow means that the transponder system used by the driver is incompatible. In cases of non payment then the car number plate is photographed by an automatic number plate recognition system.