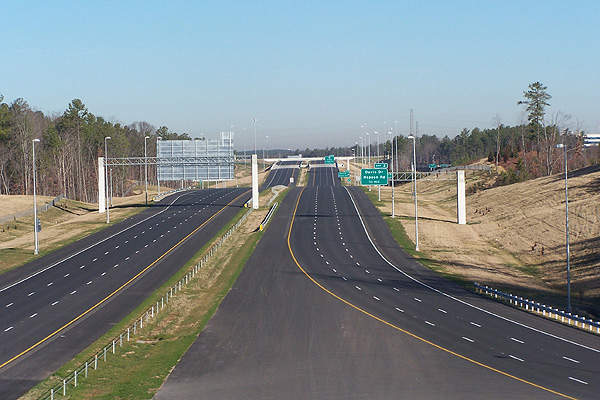 The Triangle Expressway is the first all cashless toll road constructed in the US state of North Carolina. Image courtesy of N.C. Department of Transportation. 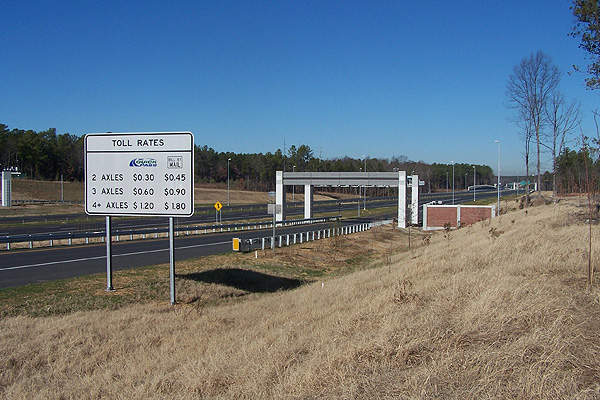 Actual tolling on the Triangle Parkway began in January 2012. Image courtesy of N.C. Department of Transportation. 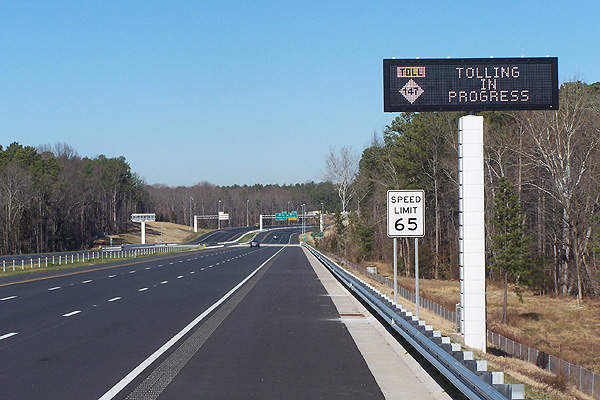 The Triangle Expressway will relieve commuters from heavy congestion. Image courtesy of N.C. Department of Transportation. 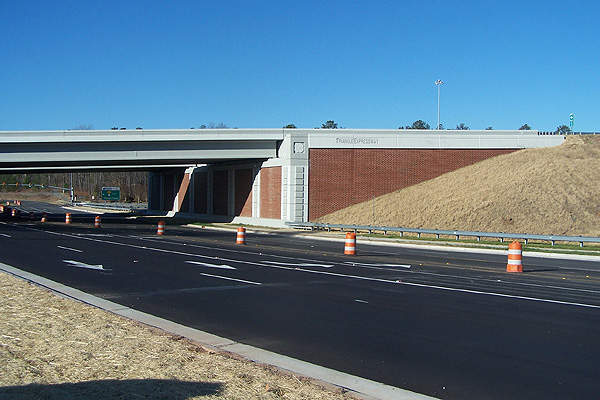 The first section of the Triangle Expressway involved the construction of eight bridges. Image courtesy of N.C. Department of Transportation. 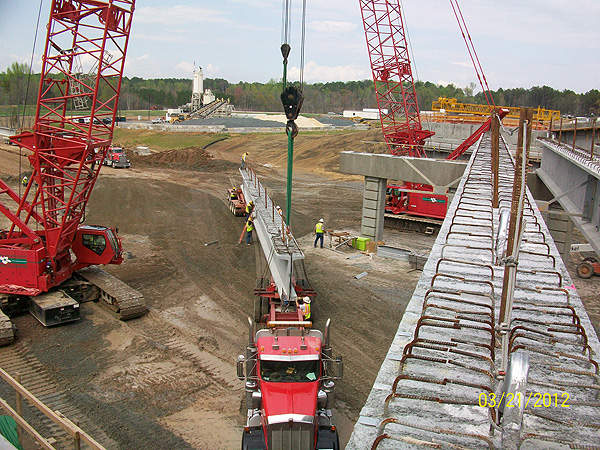 The Triangle Expressway project was completed in December 2012. Image courtesy of N.C. Department of Transportation. 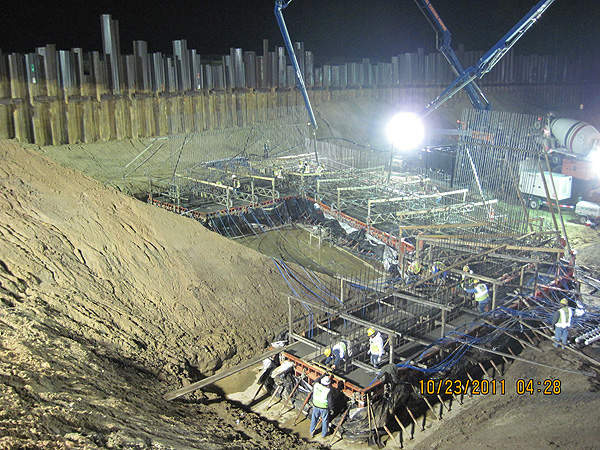 The first section of the all-electronic toll road was built by S.T Wooten, while the Western Wake Freeway section has been undertaken by Raleigh-Durham Roadbuilders. Image courtesy of N.C. Department of Transportation. 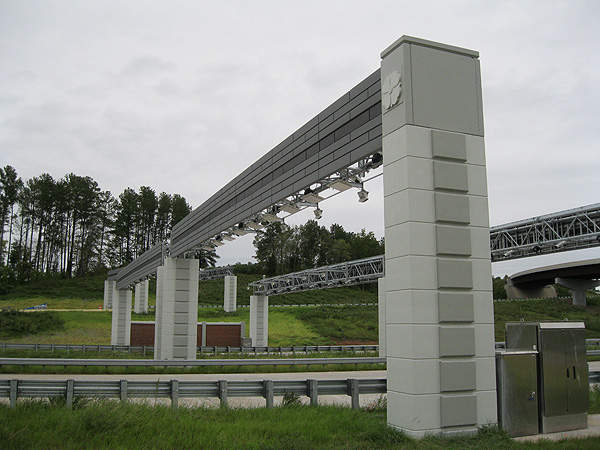 The Triangle Expressway is the most expensive public works project in the history of North Carolina. Image courtesy of N.C. Department of Transportation.

Triangle Expressway is the first totally cashless toll road being constructed in the US state of North Carolina. It is also one of the first turnpikes in the US to employ an all-electronic toll collection system. The expressway is located in Wake and Durham counties. The overall project came online in December 2012.

The main purpose of the motorway is to provide commuters with improved accessibility and connectivity to the Research Triangle Park, one of the largest science parks in North America, and western Wake County. The motorway will also relieve the heavy congestion on the existing north-south routes between Raleigh and Durham.

The Triangle Expressway project is estimated to cost $1.17bn. It was funded through toll revenue bonds worth $266.1m and state-backed bonds worth $343.3m. Government of North Carolina is providing $175.6m in the form of state funds.

The US Department of Transportation (USDOT) sanctioned $386.7m towards the project in July 2009. The USDOT paid the amount in the form of a Transportation Infrastructure Finance and Innovation Act (TIFIA) loan.

The Triangle Expressway is a multilane motorway running approximately 30km in length. The tolled highway comprises three sections in all. Triangle Parkway in Durham County is the first section.

Northern Wake Expressway, near Morrisville, and Western Wake Freeway in Wake County are the other two sections of the freeway. Construction was undertaken in two phases.

The Triangle Parkway section of the project extends from I-40 at NC 147 in Durham County south to NC 540 in Wake County. It is a 5.5km long, six-lane motorway. The section was opened to traffic in December 2011 and the tolling began in January 2012. Interchange connections to the section are provided at NC 540, Davis Drive, Hopson Road and I-40.

The Northern Wake Expressway, measuring 4.5km in length (from NC 54 to NC 55 near Morrisville), is the second section of the toll expressway. It was built by NCDOT in 2007 with surface transportation (STP) funds. It functions as a contiguous toll facility between Triangle Parkway and Western Wake Freeway.

The six-lane Western Wake Freeway section (20.3km) of the Triangle Expressway extends from NC 55 at Research Triangle Park to the NC 55 Bypass, near Holly Springs in Wake County. The section involves construction of 34 bridges, noise and retaining walls and drainage systems, as well as installation of lights and signs.

Sections along the North Carolina Department of Transportation’s express road

Construction on the Triangle Parkway section was completed in 2011. It involved construction of eight new bridges, seven box culverts, signage and road-tolling infrastructure. Works also included grading, storm drainage, water and sewer work, plus the widening of NC 147 from I-40 to T.W. Alexander Drive.

The Northern Wake Freeway, which was built in 2007, became part of the toll road in January 2012.

Construction on the Western Wake Freeway section commenced in summer 2009. The stretch from Highway 55 to US 64 opened in August 2012. The overall freeway is expected to be commissioned in December 2012.

Collection system of the US state’s all-electronic toll road

The Triangle Expressway has an all-electronic toll collection system with billing by license plate. Drivers seeking a lower toll fee are required to open an account and use a transponder. Others will receive a bill after their registered license plates are photographed automatically.

The design-build (DB) contract worth $137.6m for the Triangle Parkway section was undertaken by ST Wooten Construction, with RK&K as the engineer. Mechanically stabilised earth (MSE) abutments and wing-walls for bridge structures were designed and supplied by the Reinforced Earth Company. Bonn J Contracting was the subcontractor.

“Northern Wake Expressway, near Morrisville, and Western Wake Freeway in Wake County are two sections of the freeway.”

An automated, radio-frequency-identification system used to identify the transponders was supplied, installed and maintained by TransCore, a subsidiary of Roper Industries.

The transponder recognition system installed at the toll stations will records the vehicles with a transponder, and toll is deducted automatically from their respective pre-paid account.

Roadside toll collection system (RTCS) and related back office system was provided by Affiliated Computer Services (ACS). ACS was given two contracts worth $22m by NCTA in September 2009. A third contract worth $15.3m was given to URS Corp to manage and staff all entire customer service facilities.