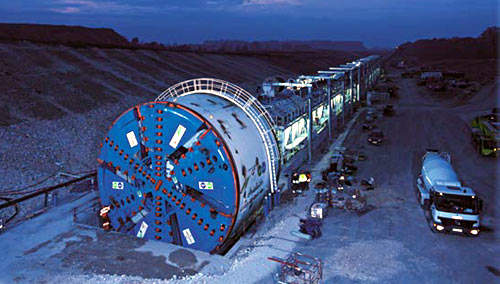 The TBM has already completed the first drive. 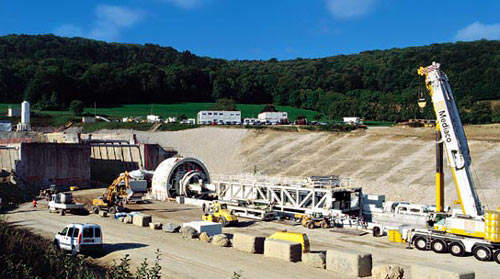 The precast yard will produce all the tunnel linings. 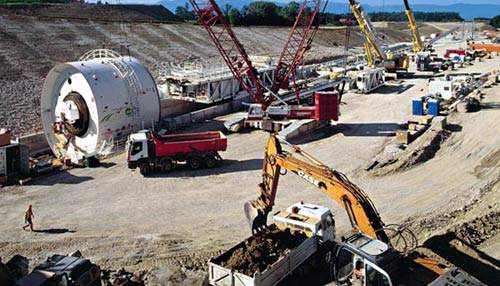 There is also the service infrastructure for disposing of tunnel spoil and maintenance. 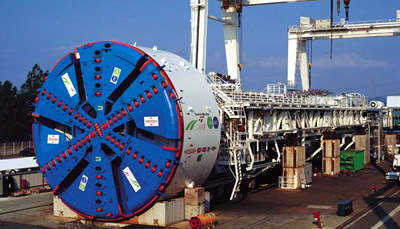 The TBM was christened Adelaide in October 2006. 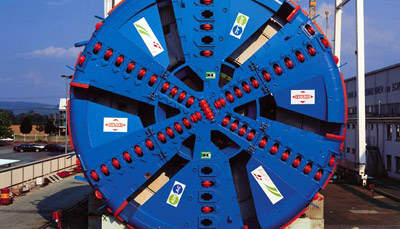 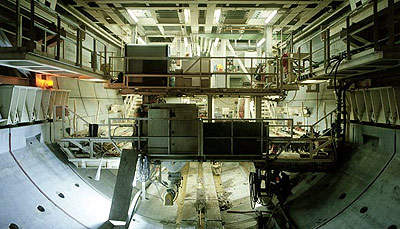 The second tunnel drive to the east is due to started in mid-2007.

The A41 north stretch is the missing link on the A41 between Villy-le-Pelloux/Saint-Martin-Bellevue and Saint-Julien-en-Genevois in the Upper Savoy region of the French Alps. The new section will complete a major regional highway link, which, via the A43 and A41, will connect the main cities in the alpine furrow (Grenoble, Chambery, Annecy and Geneva). The section, including the Mont Sion tunnel, will be officially opened on 28 December 2008.

This key segment to connect the regional transport networks will shorten the travel time between Annecy and Geneva from two hours to less than half an hour and will provide fast access through Bellegarde to the Paris-Dijon high-speed line that crosses the Upper Bugey. It will also facilitate access to the Lyon and Geneva airports.

The financing, design, construction, operation and maintenance of this 18.8km section was contracted to ADELAC in October 2005 after a pan-European call for tenders issued in 2003. A 55-year concession agreement was granted, with the concession starting immediately. ADELAC is the subsidiary of several partners.

“This key segment to connect the regional transport networks will shorten the distance between Annecy and Geneva to less than half an hour by road.”

GIE Constructeurs A41 is the joint venture of building companies responsible for construction; these include the four Bouygues Construction companies and Group Bouygues Colas.

ADELAC has commissioned to AREA the operation and maintenance of the A41 North. AREA already operates a network of 384km of highways in the Rhone-Alps region, with more than 100km situated in mountainous areas (A43, A48, A41, A51N). The AREA network also includes several tunnels, in particular the 2 x 3,150m L’Epine tunnel. The motorway will be toll operated and there will be a 29-gate toll plaza at Villy-le-pelloux/Saint-Martin-Bellvue.

The project has required more than 180 earthmoving vehicles (diggers, bulldozers, scrappers, graders and dumpers), to move seven million square metres of earth, to build a precast concrete segment plant (3,000m²) at the north portal in Presilly.

A total of 2,914 lining rings were produced and delivered. There was also a need to construct seven base camps and four processing plants to produce the asphalt for the road surface (two fixed facilities and two mobile ones).

At the peak of construction, up to 900 people will be employed on the project. In addition to four viaducts (264m, 270m, 212m and 360m), the construction also required a cut-and-cover tunnel in Le Noiret and a twin bored dual-lane 10.5m diameter tunnel under Mont Sion. The four viaducts were constructed using precast deck panels and required 28,000m³ of concrete and 6,000t of structural steel.

The 3.1km Mont Sion tunnel was the key component and major structure of the A41 North. The TBM (Tunnel Boring Machine) platform and the power systems necessary for the functioning of the machine are situated at the north portal along with the majority of service infrastructure.

The TBM was christened in October 2006 and named ‘Adelaide’. The west tunnel cutting was completed in June 2007. The TBM was then brought back to the north portal for the second drive of cutting the east tunnel, the excavation of which began in March 2008.

Complete tunnel construction was scheduled for July 2008. The four tunnel portals (30m to 120m) were built by a Paurat roadheader machine which excavates the top heading under an umbrella vault, then steel arches are installed and shotcrete is sprayed.

The TBM (S-333) was constructed by Herrenknecht and is the biggest TBM in service in France being 12m in diameter, 220m long and weighing 2,200t. It is composed of a cutting wheel and 11 trailers that supply the 4.8MW power logistics that are used as supports for the assembly of the concrete rings (approximately 18,000 segments of 15.5t each), and allow for the mucking-out and lengthening of the conveyor belts and pipes.

It is a hard rock TBM in open mode that constructs the tunnel as it progresses. An average daily advance of 23m to 24m is expected. Under the joint effect of a 4rpm rotation and a thrust of up to 82 mega newtons – 8,200t exercised by 24 hydraulic jacks moved by 16 motors of 160kW – the disc cutters laid on the cutterhead chew through the ground. The tunnel shield is also supported by 11 back-up gantries.

Thanks to the loading buckets, the rock (2 x 340,000m³) is evacuated outside by a belt and trucked to final dump sites.

The segment moulds and the carousel plant are supplied by Herrenknecht. The segments have been installed according to the so-called Swiss method, which means that instead of erecting the segments one after the other, a complete ring is assembled in the shield’s tail skin. By its own weight, the ring stands in the tail skin and is then transferred to its final position.

The Mont Sion tunnel includes seven cross passages to enable communication between both tubes in case of emergency. Four are for pedestrians while three are for rescue vehicles. These seven cross passages have been excavated, after cutting the segments, by a rotating head or hydraulic hammer.

There are also 15 fire and 20 emergency refuges equipped with fire gates and emergency call telephones installed in every tube. The longitudinal ventilation system comprise 38 reversible fans (20 in the east tunnel and 18 in the west tunnel).