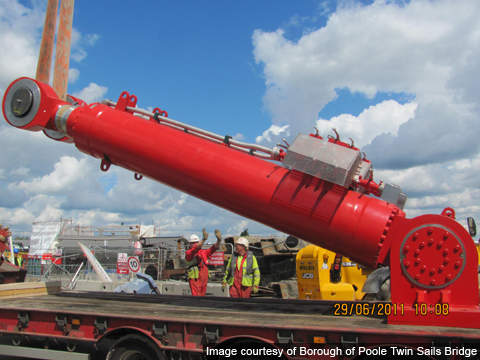 The Twin Sails Bridge is a lifting bridge that spans the backwater channel in Holes Bay and connects Poole town centre to Hamworthy. 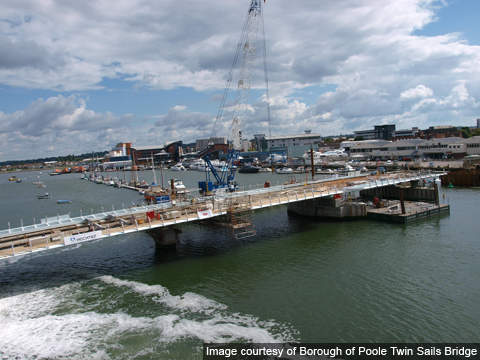 It is the second harbour crossing at the Holes bay. The existing bridge, which was built in 1927, is facing congestion due to increasing traffic levels. 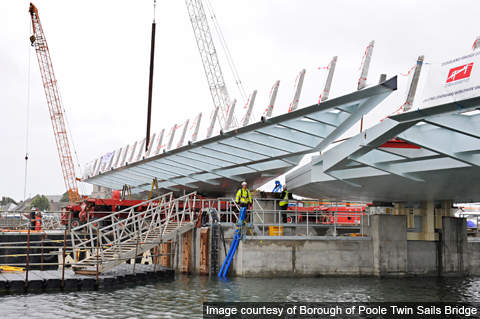 The construction works were initiated in May 2010 and the bridge opened to traffic in April 2012. 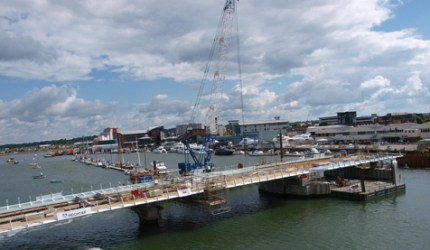 The Twin Sails Bridge is a lifting bridge that spans the backwater channel in Holes Bay and connects Poole town centre to Hamworthy. It is the second harbour crossing at the Holes bay.

The existing bridge, which was built in 1927, is facing congestion due to increasing traffic levels. The new bridge is expected to ease congestion.

"Hochtief (UK) Construction won the £18.5m contract for the construction of the bridge."

The bridge got its name Twin Sails due to the sail-like appearance of the triangular lifting leaves. The construction works were initiated in May 2010 and the bridge was opened to traffic in April 2012. The project was estimated to cost £37m.

The new bridge is linked to the West Quay Road in the east and urban feeder roads in the West. The old bridge continues to operate even after the opening of the new bridge.

The project received the outstanding achievement award for exterior lighting at the Architecture Lighting Design Awards 2012. It was also among the top four final bridges selected at International Institute of Structural Engineers Awards 2012, as well as being selected under the commendation category for its structural authenticity.

After being opened in April 2012, the bridge failed to function three times during the same year. The Poole council has demanded an inquiry from Hochtief (UK) Construction who is responsible for repairs during the first functional year. In addition, sections of the road surface fell off due to the use of deficient binder material. Repair works on these sections started in October 2012.

Design of the Twin Sails Bridge

The Twin Sails Bridge is a double leaved bascule bridge. The leaves are lifted at 88 degrees with the help of hydraulic rams so ships can pass through easily.

The approaches comprise two spans of approximately 27m each on either side of the opening span. The central area consists of two triangular lifting leaves. When open these leaves rise 35m above the bridge deck.

The New Sunderland Bridge or the New Wear Bridge will be the tallest of its kind in the UK, spanning over the River Wear in Sunderland city. The landmark bridge will connect Pallion in the South and Castletown in the north. The project received planning permission from the Sunderland City Council in April 2010. It will serve the vehicular, cyclist and pedestrian traffic as an important gateway to the city centre and a symbol of Sunderland.

Construction of the lifting bridge

The plan for the construction of a new harbour crossing was initiated in the 1980s but first proposed in 2004. The Twin Bridge received an approval from the Secretary of State for Transport in August 2006.

Construction work on the bridge at Poole Harbour began in May 2010 but was delayed until October 2010. Construction of the junction which links the bridge to the Blandford Road began in January 2011.

The demolishing works on Poole Boat Park building started in June 2011. The work on the installation of six supports of the bridge began in October 2010.

Contractors involved in the construction project

Hochtief won the £18.5m contract for the construction of the bridge. The contract for the supply of around 900t of steel was awarded to Cleveland Bridge UK. Gifford, part of Ramboll, are the lead design consultants.

"The bridge got its name Twin Sails due to the sail-like appearance of the triangular lifting leaves."

Construction of new roads and footpaths to link the bridge to Blandford Road was undertaken up by the landowners JJ Gallagher and Land Improvement Holdings.

A loan of £9.96m was granted towards the project by the South West of England Regional Development Agency in March 2010. The Department of Transport funded £14.1m in February 2010.

The project has also received funding from the Department Communities and Local Government (£2m), Borough of Poole (£7.939m) and Developer Contributions (£2m).