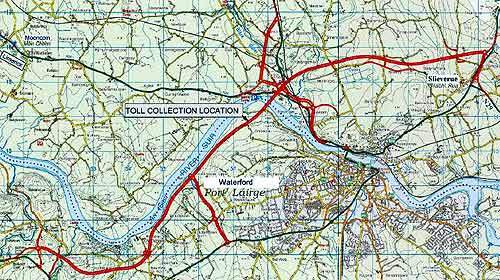 A map of the Waterford road route.

The progress of the road at Ballynamona. 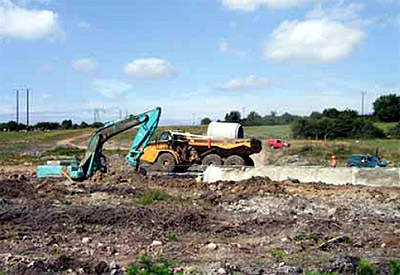 The progress of the road at Smartcastle. 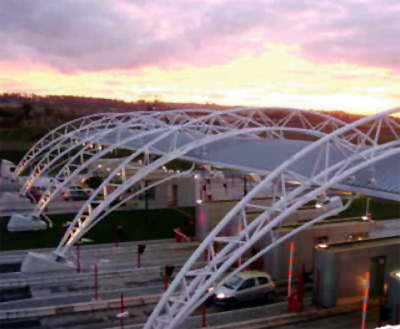 The toll road will use a full range of payment schemes. 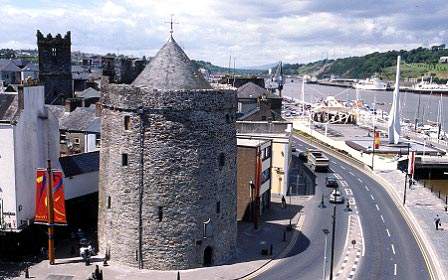 The Quays area of the city will be relieved of traffic congestion.

As part of the continuing upgrade of Ireland’s road infrastructure, the N25 bypass of Waterford City opened to traffic on 19 October 2009. The project, which was first announced in a series of pilot projects in 1999, got underway in April 2006.

The project includes a cable-stay bridge (approximately 475m) crossing over the River Suir in the vicinity of Grannagh, close to the location of the existing N24/N9 Junction to the north-west of Waterford City.

The bypass commences in the vicinity of Kilmeaden to the west of the city, crosses the River Suir at Grannagh and ties in with the existing N25 to the east of Slieverue Village. This includes a new connection, known as the Western Link, which connects the bypass to the industrial areas south-west of the city and links the N9 and N24 to the Grannagh Interchange.

The project also has five at grade junctions the first at Carrick road. At Luffany and Slieverue the junction forms a connection between the mainline and the existing N25 and N29. At the Quarry roundabout it forms a link with M9 and a link to the WIT campus on the western link.

The construction also includes two grade separated junctions, at Knockhouse Upper (western link junction) and at Grannagh (Grannagh junction). These two junctions tie in the mainline to the western link and to the N24, the N9 (M9) and the Newrath Link.

The €530m project, which is key to the Irish Government’s Transport 21 plan, was completed in about ten months ahead of its schedule.

The tender process for the project was suspended in 2004 by the Department of Environment Heritage & Local Government (DOEHLG), following the discovery of significant archaeological finds known as the ‘Woodstown Viking Site’. This site was a defended riverside settlement, with associated industrial activity. Artefacts and radiocarbon dating placed the site within the early Medieval period. The Norsemen occupying the site possibly used an existing settlement of native Irish origin.

The site was discovered during the course of pre-contract archaeological testing undertaken on the scheme. The Minister for the Environment, Heritage and Local Government issued archaeological directions for the Woodstown site on 11 May 2005. The Minister directed that the archaeological site was to be preserved and this required a revised alignment for a section of the route.

The road was constructed under a public private partnership agreement; the PPP contract (worth €300m) was awarded by the National Roads Authority in April 2006 to Celtic Roads Group (Waterford) Ltd, a consortium which consisted of Dragados (Spain), NTR plc, Royal BAM (a subsidiary of Koninklijke BAM Groep NV) and Ascon (Irish civil engineering company). The design of the road and associated structures was carried out by ARUP, Eptisa, PH McCarthy and Carlos Fernandez Casado SL.

The design, build, finance and operation contract was completed within ten months. The consortium operates and maintains the road for the remainder of the 30-year concession. Waterford City Council, Waterford County Council and Kilkenny County Council have a stake in it.

The 465m cable-stayed bridge across the River Suir,the longest in the state, also opened to traffic on 19 October 2009. The design of this bridge includes a 112m tall ‘A’ frame tower and a twin fan of cables to support the deck edges. The road will be operated as a toll road with five toll lanes in each direction and a toll plaza located on the South side of the River Suir Bridge. The toll plaza includes administration building, toll plaza canopy and tunnel and associated toll collection system, located in Gracedieu. This will involve a full range of payment schemes including toll plaza’s and electronic tag methods.

The project has been on the cards for the past 40 years and has been sought several times to reduce congestion in the city quay area and to reduce dependency on the existing Rice Bridge, which opened in 1984 and now caters for over 40,000 vehicles per day.

Funding was initially announced in June 1999, but a protracted planning process, and then the Woodstown viking site discovery, delayed the start. The scheme will now make it easier to plan properly for development on the North Quays and Frank Cassin Wharf sites as well as improving the quality-of-life for local residents, commuters and visitors.

The concessionaire, Celtic Roads Group (Waterford) Limited (sponsored by Dragados S.A., Royal BAM Group N.V. and NTR plc) has responsibility for the design, construction, financing and operation and maintenance of the toll motorway.