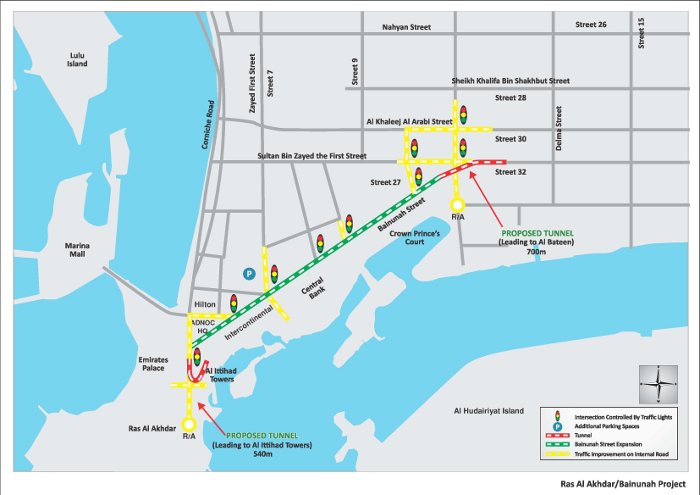 The Department of Transport (DoT) in Abu Dhabi, in the UAE, is expected to complete a tunnel and infrastructure development project worth Dh800m ($217.8m) around Baynounah Street by the end of 2012.

The project includes a two lane 540m tunnel which will provide direct access to the Etihad Towers, plus another two lane 700m tunnel located at the intersection between Bainuna Street and Sultan Bin Zayed Street.

Construction on the Ras Al Akhdar tunnel has completed and is expected to become operational by the end of April this year, 2012. Baynounah tunnel is 70% complete, and after completion it will help in diverting traffic from Baynounah to outside of the island.

Work on the project had started in May 2011 and the road-works project was awarded to Al Naboodah Contracting Company. After completion of the entire project, the capacity of the roads will be able to handle 3,000 vehicles an hour, three times more than the current rate.

The project also included widening part of Bainunah Street to four lanes, including a dedicated bus lane and a service lane to cater to the hotels in the area.

The widening of Baynounah Street has already been completed and parts are already in use, according to thenational.ae. The new road will have a speed limit of 80kmph and tunnels will have speed restrictions of 40kmph to ensure the safety of the travellers.

Image: The projects include a two lane 540m tunnel which will provide direct access to the Etihad Towers and another two lane 700m tunnel at the intersection between Bainuna Street and Sultan Bin Zayed Street. Photo: Abu Dhabi Department of Transport (DoT).