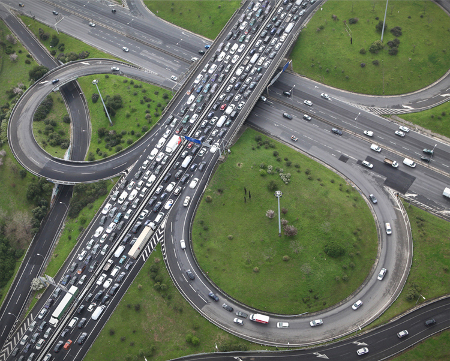 Belfast and Bristol are the most congested cities in the UK with the slowest moving traffic, according to the 2012 Congestion Index published by TomTom.

The latest figures reveal that the average journey for motorists in Belfast takes 32.1% longer than it would if the traffic moved freely, with a peak-time journey taking 71%-72% longer than a normal trip.

In Bristol, the average journey time for travellers is 31% longer than it would be in free-moving conditions. During peak hours, it takes 56% longer in the mornings and 64% longer in the evenings; on average, a journey that should take an hour takes 98 minutes.

London, where traffic conditions have improved since the introduction of the congestion charge in 2003, takes third place in the list with average journeys typically taking 27.5% longer.

Morning rush-hour traffic in London is 56% longer than free-flowing conditions, while evening traffic movement is 55% longer.

TomTom traffic head Ralf-Peter Schafer said that the figures from the index are frequently used to help local authorities plan their transport policy.

"Morning rush-hour traffic in London is 56% longer than free-flowing conditions, while evening traffic movement is 55% longer."

"This detailed knowledge of the entire road network, helps businesses and governments make more informed decisions about how best to tackle and avoid congestion," Schafer said.

"Our traffic database contains over six trillion data measurements. This helps us determine which routes are the least busy and what times of day are best," he added.

Outside of the UK, TomTom’s 2012 data, which includes figures from 161 cities across the world, shows that motorists in Moscow, Russia, have the worst traffic jams in the world, with the average journey 66% slower than in free-flowing traffic.