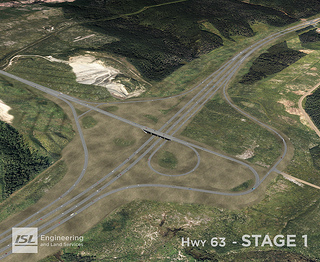 To be executed by Sureway Construction, Phase I of the interchange is scheduled to be open for traffic in autumn 2015.

Work on the project is expected to begin this week.

Minister of Transportation Ric McIver said that the new contract is yet another major investment that supports the residents and industry of Fort McMurray and the oil sands area.

Once completed in 2016, Phase I will help make the commute easier and safer for Fort McMurray residents.

"Phase I of the interchange is scheduled to be open for traffic in autumn 2015."

In addition to the interchange construction contract, Alberta had already invested C$150m ($145.17m) for earthworks, utilities relocation, engineering design and other development work in the Parsons Creek area.

Parsons Creek access is one of the many Highway 63 projects that are currently under construction to support market access and economic opportunities in the core transportation network, promote safe travel for industry and Albertans as well as improve the flow of goods and services.

By March 2014, Alberta Transportation will have invested over $1.4bn (convert) towards various Highway 63 and 881 projects since 2005, delivering key infrastructure for the Athabasca oil sands region.

Image: Once completed in 2016, Phase I of the Parsons Creek interchange will help make the commute easier and safer for Fort McMurray residents. Photo: courtesy of Government of Alberta.