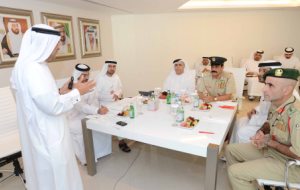 The Roads and Transport Authority (RTA) of Dubai is set to deploy the Heavy Vehicles Defects Clearing System (VDCS), with an aim to prevent accidents and enhance road traffic safety.

Featuring surveillance systems and smart technologies, it is claimed that the system can solve technical defects of heavy vehicles and minimise traffic accidents caused by heavy vehicles.

The system can also identify vehicles that fail to comply with RTA standards and can subsequently stop them, enhancing the road traffic safety level.

"The VDCS is an integrated system of effective policies and smart technological applications."

RTA executive director Mattar Al Tayer said: "The VDCS is an integrated system of effective policies and smart technological applications that enables the RTA and the Dubai Police, as well as the operators of heavy trucks, to examine and analyse data pertaining to vehicle faults using vehicles and drivers risks and safety system at world-class standards.

"The RTA has carried out a comprehensive study in coordination with a specialist consultancy firm about the traffic safety of heavy vehicles using the ‘maturity model’ of heavy vehicles safety and benchmarked it against the practices of advanced countries."

According to the RTA, heavy vehicles are responsible for 20% of accidents in the country.

Dubai Police commander-in-chief Major-General Khamis Mattar Al Mazeina said: "Through the system, operators and owners of companies can identify attitudes of offending drivers, the operational condition of the truck and the availability of the required safety stipulations and accordingly take appropriate steps and decisions necessary for eliminating the occurrence of accidents or technical faults."

Image: Officials of RTA and Dubai Police in discussion over implementation of the Heavy Vehicles Defects Clearing System (VDCS). Photo: courtesy of Roads and Transport Authority.