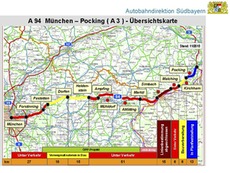 The European Investment Bank (EIB) has offered a €160m ($174m) loan to fund the construction of a 33km-long motorway section in Bavaria, Southern Germany.

The section will increase traffic on the existing but saturated B12 road, known for having one of the highest accident rates in Bavaria, as well as drive traffic from two motorways running north (via Passau) and south (via Salzburg).

After completion, the A94 will offer a 30km shorter route than the existing route, significantly reducing travelling times, transport costs and CO2 emissions from long-distance traffic.

"Supporting sustainable roads is one of the goals of the EU bank.

The construction work of the section will be executed on the basis of a public-private partnership between the Free State of Bavaria, represented by the Autobahndirektion Südbayern, and a consortium of three contractors, BAM, Eiffage and Berger Bau.

As a part of a 30-year contract, the scope of the project includes the design, construction, maintenance and operations of the motorway.

Two adjacent stretches measuring 44km in total will also be maintained and operated under the contract.

Construction work is scheduled to begin within a few months and expected to be completed in the second half of 2019.

The consortium will receive about 50% of the long-term funding requirement from EIB.

EIB vice-president responsible for lending in Germany and Austria Ambroise Fayolle said: "Supporting sustainable roads is one of the goals of the EU bank. We are glad to be a partner in this project, as it will facilitate transport in major industrial regions of two countries.

"By shortening the distance on this important European East-West connection, the motorway between Pastetten and Heldenstein will make it easier for companies in Germany and Austria to do business and safer for everybody to get from A to B."

Image: The motorway section of A94 will be 30km shorter than the existing routes. Photo: courtesy of European Investment Bank.